News in Brief: Save Ben, Judy on Dick and gong for Sir Bruce

Another ATV Sunday celebrating the world of showbiz and broadcasting with ATV Today’s Mike Watkins.

Not the bell in the tower down at the Houses of Parliament, no we’re talking EastEnders’ Ben Mitchell, who for some bizarre reason is being written out of the saga. Having brought his mother Kathy back, and father Phil around, the link between the two is set to be spilt again with the departure of the character at the hands of the caretaker bosses who are trying to drag the show back into something worthy of broadcasting on the BBC. Fans of the young Mitchell have started a campaign to save the Walford regular.

“EastEnders fans are furious that a legendary character has been axed and have taken drastic action to prevent it.” – The Daily Star

The Daily Star report the ‘drastic action’ is in fact an online petition on Change.org begging producers to change their mind. After all there are plenty of other ‘young’ characters with less family links on the square they could ditch instead of dear Ben.

Emmerdale fans, ever observant, claim to have spotted a ‘big baby blunder’ in the rural ITV soap opera.

“Fans of the soap were left baffled after she showed off her rather large tot… as they claimed Moira’s newborn looks about three months old.” – The Sun

The Sun reported how the storyline has seen Moira give birth, having previously had no inkling she was pregnant until she went into labour and at first no one was quite sure whom the father of the rather large babba was. A DNA test later revealed the father to be Cain.

‘Wow that is one large new born baby on #emmerdale how come she didn’t know she was pregnant with a baby of that size’ the tabloid notes one viewer noting on social media. Well the slogan used to be how it was a small village with big drama, and now clearly very big newborns too.

TV Highlight of the Week

This week the highlight came via Sky News and Sunrise when Sarah-Jane Mee thanked co-host Jonathan Samuels and the sports presenter for their input to a segment of the show, as if she was the lead star of the programme. Who does Mee think she is, Eammon Holmes? Maybe ITV need lure her to Good Morning Britain, someone who may just give Piers Morgan a run for his superiority…

Sky News Sunrise – Sarah Jane and Johnathan – a dual partnership, or is it?

Entertainer Sir Bruce Forsyth is to be celebrated at the 2018 National Television Awards as the late performer has an award named in his memory. The Huffington Post reported how ‘Ceremony bosses have announced they are renaming the award for the Best Entertainment Show as The Bruce Forsyth Entertainment Award in recognition of his unique 75-year career.’

Sir Bruce, who died in August at the age of 89, had been seen on television screens regualrly since the late 1950s when he first hosted ATV’s Sunday Night at the London Palladium, going on to present The Generation Game and Strictly Come Dancing for the BBC and Play Your Cards Right and The Price Is Right for ITV.

Its also been reported that the revival of The Generation Game will give its own tribute to Forsyth who first hosted the show from 1971 to 1977 and again from 1990 to 1994, with a special ‘now and then’ series in 2008. New hosts Mel and Sue, of The Great British Bake Off fame, are set to take over the Gen Game next year. It was reported last week that in the first episode of the new four-part outing Bruce would feature in some visual form ‘handing over the show’. The Generation Game was taken on by comedian Larry Grayson in 1978 – who is set to be honoured by an ITV3 documentary next year – with other hosts including stand-in presenter Roy Castle, 1990s regular Jim Davidson and Graham Norton who presented a one-off special celeb edition, Generation Fame.

This week saw, exactly 25 years on from its first outing, some of the Gladiators reunited on This Morning. The LWT show, which saw sporty ‘joe publics’ battle the professional gladiators, made household names of the likes of Jet, Hunter, Panther and Ace – all of whom popped up on the morning show to wallow in tight lycra nostalgia.

ITV Central News has chosen Gareth Owen as Lead Correspondent, taking on a number of newsroom management responsibilities. Previously Political Correspondent and continuing to occasionally work as Programme Editor. BBC News Director of News and Current Affairs James Harding will stand down at the beginning of the new year. James leaves the beeb to set up his own news media venture while ITN Productions has named John McAndrew as Series Editor of After the News, which aired for the first time on the 9th of October and Bloomberg News has assigned Laura Benitez as Leveraged Finance Reporter.

Lily Allen took to social media recently to take to task Chris Eubank over being ‘disrespectful to women’ after he eased out of view ring girls while his son was doing a television interview. Chris Jnr however was having none of her back chat and told her to sort herself out first. She tweeted him; ‘They are doing their job. Your dad went bankrupt and gave you to a stranger in Vegas, the only photobomber here is him. #respectwomen’ with his delightful response ‘It’s called banter Lily. You’re well known for abusing drugs and alcohol so maybe focus on respecting yourself 1st before worrying about others.’ forget the boxing gloves its handbags at dawn.

Despite a failed return a decade ago, which saw some episodes never even see the light of day on ITV, ‘iconic’ game show Supermarket Sweep looks like it may be set to return to screens as owners of Thames Television – Fremantle Media – have taken on the sole rights to the programme in the UK. The show hosted by Dale Winton, was first gifted to daytime ITV viewers in 1992 courtesy of Central Television who built a life-size supermarket in their now defunct Nottingham Studios. The Birmingham Mail report that there have been thirteen versions of Sweep around the world since it was devised by American producer Al Howard in 1965. Fremantle have not revealed which network is likely to screen the relaunched and ‘modernised’ version of the show. It ran regularly on ITV until 2001, with that short-lived revival in 2007 failing to lure in viewers and numerous episodes left un-aired by the broadcaster.

As the allegations against American movie mogul Harvey Weinstein roll on the Oscars board has expelled the producer from its organisation due to the scandal which has ‘rocked Hollywood’. In a statement, BBC News report that, the Academy said governors voted to expel Weinstein “not simply to separate ourselves from someone who does not merit the respect of his colleagues but also to send a message that the era of wilful ignorance and shameful complicity in sexually predatory behaviour and workplace harassment in our industry is over”.

They can’t sing very well, they can’t entertain all that great, but give the boys credit, Jedward keep on trying. And despite this week being ‘bottled’ by ‘fans’ the brothers carried on performing for their easily pleased followers. The twin performers were attacked, Metro paper reports, with a bottle onstage launched by a gig goer during their performance at Lincoln Student Union on Wednesday night. Lucky they have all that hair to protect their precious heads.

The Chase star Mark Labbett stripped off on Friday’s Loose Women to show his support for their Body Stories campaign. Mark suggested that a broader range of men should be included in the ITV campaign, which features celebs including sportsman Robbie Savage and actor Shayne Ward.

Got some bottle: Jedward on Celebrity Big Brother for Channel 5

Former Loose Women and This Morning personality Judy Finnigan has claimed that a ‘sleazy TV boss’ once flashed his penis at her during a dinner party when she was 22. The Sun report that the 69-year-old journalist, who forged her television career in regional news with both Norwich-based Anglia Television and Granada Television in Manchester, was at the executives home when he unleashed his ‘dangly bits’.

“He emerged from the kitchen with his dangly bits released from his fly… Charming it was… When I told him to get lost and that I was going home, he replied I was obviously frigid… Virtually every woman in the wider media has experience of these beasts.”  – Judy quoted by The Sun

Judy had a dinner party dick experience when she was 22

Actress Claire King, recently seen in Coronation Street, has opened up about her ex-husband Peter Amory’s affair with Samantha Giles.

Giles and Amory had their ‘ding dong’ during their time on ITV Yorkshire saga Emmerdale where Amory played son-in-law Chris Tate to Claire’s Kim, while Giles plays Bernice. Talking on Channel 5’s In Therapy on Friday night she noted,

“We split up due to his infidelity…. What hurt was the fact that every b*gger knew. I suspected but everyone knew who because it happened in my house, in the local pub, the workplace. I did suspect and I did suspect who but officially I was the last to know.”

The couple split following his affair with his co-star Giles, while Claire was starring in ITV drama Bad Girls and working in London. “The distance thing was not great.” she noted.

Claire also discussed the passing of her best mate Fiona who died of Bladder Cancer in December 2015,

“We were thick as thieves, we did everything together. It’s been really hard, I’ve put up a big wall… It’s the worst loss that I’ve ever experienced, and I haven’t dealt with it and haven’t talked about it… I feel vulnerable, like I’m losing control, and I don’t like it…. I’m not used to letting it all go.”

The man behind Mrs Brown – and indeed her boys – Brendan O’Carroll – has spoken about a recent health scare on RTÉ chat show, The Late Late Show. Described by the Irish network as ‘looking tired and withdrawn’ O’Carroll told presenter Ryan Tubridy that he’d been ‘taken ill’ while filming the Mrs Brown’s Boys Christmas Specials at the BBC Scotland studios in Glasgow.

“Monday… I got this bug… And it’s really, really painful. About two in the morning I had to wake up [Jenny his wife]… I just went in and said, ‘Listen, I think you should call an ambulance. I think I’m having a heart attack’.”

It turned out the performer and comedian wasn’t having such a serious issue with doctors discovering he was suffering from a very violent bug. He told the long-running chat show that he is now feeling ‘much better’.

Mrs Brown’s Boys is recorded for the BBC and RTÉ at the beeb’s Glasgow Pacific Quay studios (image: ATV Network) 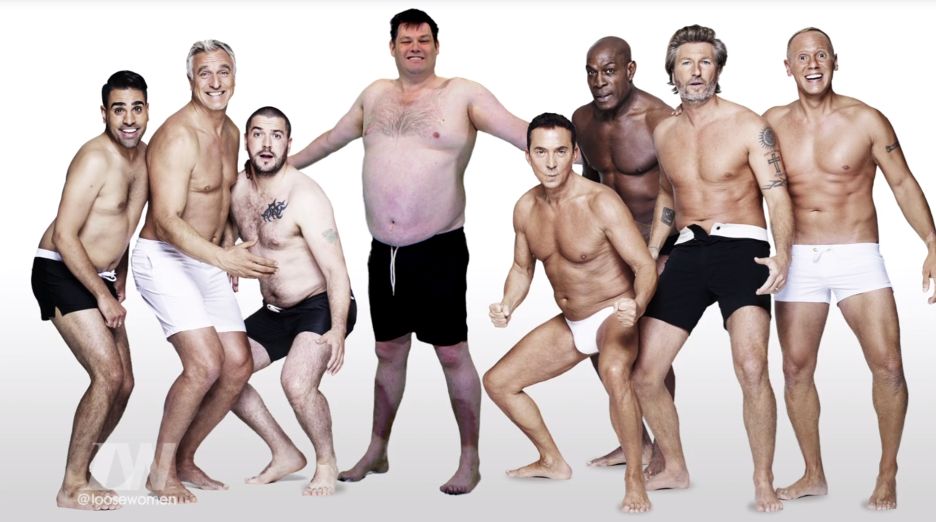