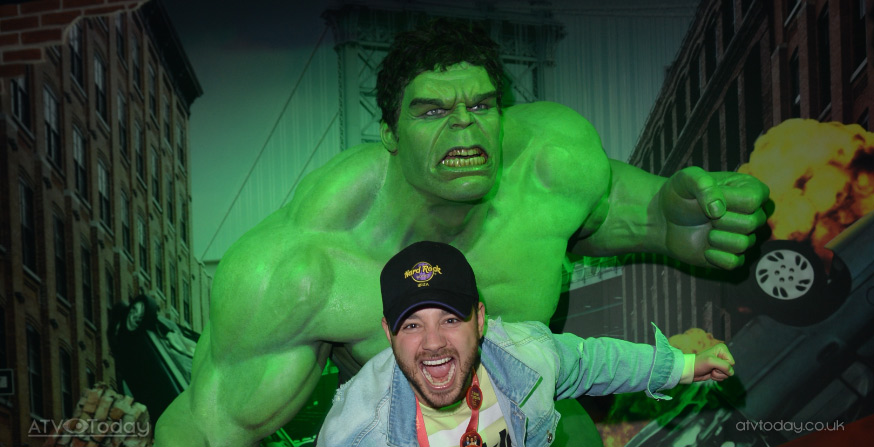 Former Emmerdale actor Adam Thomas gets up close with Hulk.

“We are thrilled to announce the addition of Marvel Super Heroes to the attraction, in an amazing UK first. The new area will be a must-visit destination for all Marvel fans, offering the chance to get up close and personal to their favourite characters from the big screen.” – Matthew Titherington, General Manager at Madame Tussauds Blackpool

Madame Tussauds Blackpool recently announced their epic new addition and this week stars of television helped launch the experience. The previously undeveloped space will add 5501 square feet to the existing public footprint within the attraction, so guests can experience something truly out of this world.

As if something from a classic Marvel comic strip, visitors will step right in to the action and come face-to-face with their favourite comic book and film heroes.

Incorporating four distinct zones, the new area will include a number of new figures as well as interactive experiences to truly excite and delight visitors. The attraction takes inspiration from the original comics as well as the blockbuster films that continue be a huge hit at the box office. 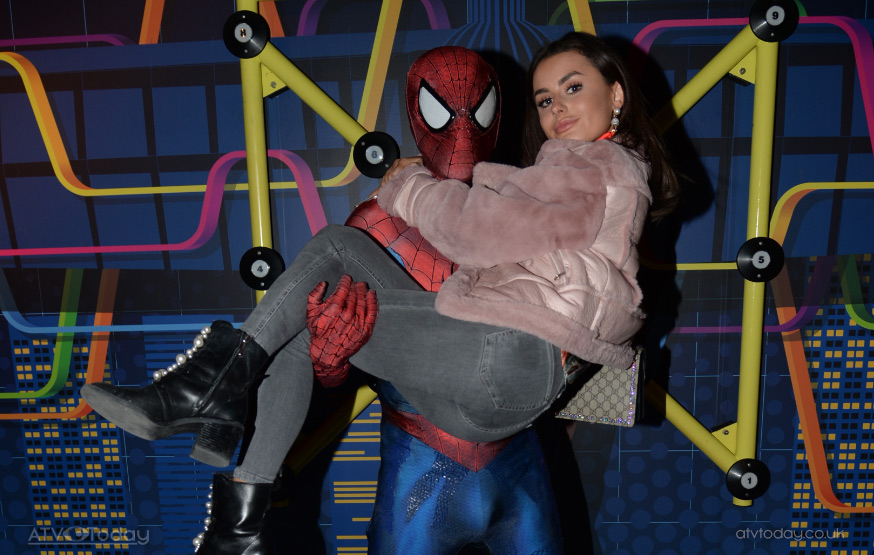 Amber Davies gets to feel the bulging muscles of Spiderman.

The Zones, with more scheduled to be added, currently consist of Zone One, the Comic Store. It features a vintage comic book shop with classic publications and action figures. Zone Two is Thor. Guest can enter a Jotunheim ice cave and come face-to-face with the Asgardian god of thunder himself, before attempting to lift Thor’s legendary hammer Mjolnir, forged by Dwarven blacksmiths out of the Asgardian metal Uru.

Zone Three is Hulk and Spider-Man. Surrounded by debris and destruction, visitors will encounter the Hulk in a New York street. Guest can then put their strength to the test as they attempt to lift a yellow taxi, that has crashed and is covered in debris while underneath overhead railway arches guests see a series of skyscrapers, where the Daily Bugle has arrived to take a photograph of Spider-Man who is suspended high above the city streets. Zone Four will have its contents announced later this year.

“We are working closely with Merlin Magic Making and Marvel on the design and build to ensure the new attraction is authentic to the comics and offers unique experiences. As many of the interactive elements have are bespoke to Madame Tussauds Blackpool – something UK visitors have never seen before.” – Matthew Titherington, General Manager at Madame Tussauds Blackpool

Marvel Super Heroes is part of the main Madame Tussauds Blackpool attraction and is included in the ticket price, starting from £13.50 for children and £16.50 for adults (additional 20% discount available when tickets are booked online).