The interactive mosaic image – which is viewable here – is comprised of over 350 pictures made by children from around the UK of themselves with their friends which they drew on their return to nursery and pre-school earlier this month.

In what is being dubbed as ‘the world’s friendliest piece of artwork,’ the International Friendship Day Picture is based on a poster image of ‘Thomas & Friends: The Royal Engine’, the episode which aired earlier this year as part of the brand’s 75th Anniversary celebrations. The successful 22-mins special featured an introduction from Harry, the Duke of Sussex and starred actress Rosamund Pike as the voice of royal engine Duchess and now has its own toy line available to buy in shops and online.

“I’ve used more than 350 images drawn by children across the UK to make a unique piece of digital art depicting the importance of friendship. It’s been great to see so many pieces of colourful and creative artwork. I have to say, working on this picture, has really put a smile on my face so I hope the finished piece does the same to everyone who sees it.” – Nathan Wyburn

Taking a close-up look at the super-sized picture, which can be done by using the special built-in zoom feature, reveals some famous faces amongst the crowd. Ant & Dec, Phillip Schofield and Holly Willoughby, Stormzy and Ed Sheeran, Amanda Holden and Alesha Dixon, are amongst those to be featured in the image after their friendships were voted as some of the nation’s favourite. Can you find them amongst the hundreds of other drawings? 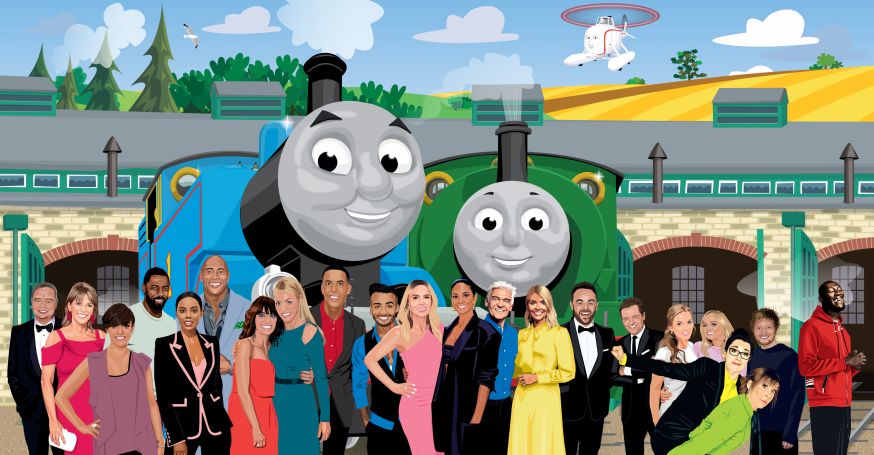 Daniel Crisp, an official Thomas & Friends illustrator, has produced the celebrity images for the picture in the same style as the books which accompany the much-loved TV series. In a must-see celebrity compilation image that he has made for the picture, Daniel has imagined what a day out on the Island of Sodor, the fictional home of Thomas, might look like with celeb buddies meeting Thomas and Percy.

“In this special 75th anniversary year for Thomas & Friends, we are celebrating friendship in as many ways as possible. This includes taking a look at what it means to be a good friend and how we can nurture these important relationships, so they bring us a lifetime of joy and happiness. We know how difficult it has been for children not being able to see their friends recently, so we wanted to commission this very special artwork made up of all their pictures to immortalise these special friendships, and to raise a smile amongst everyone who sees it during these challenging times”. – Claudia Caron, Marketing Manager at Mattel

CAN YOU FIND THESE CELEBRITY FRIENDSHIPS HIDDEN IN THE IMAGE?