A recent study has taken a look at the worst telly bosses, from Michael Scott to Mr Burns.

The world’s worst TV boss according to this study was Don Draper of Mad Men, with a score of 1,134. Michael Scott, The US Office and David Brent, The UK Office are also among TV’s worst bosses, ranking in third and fourth place. 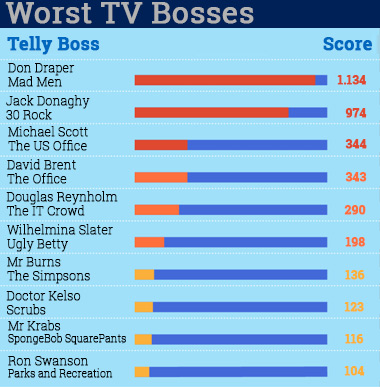 Ron Swanson of Parks and Recreation received just 104 points and was additionally voted as the boss people would most like to work for.

There are a lot of cliché phrases surrounding work – ‘teamwork makes the dream work’, and ‘it’s not where you work it’s who you work with’ to name a few. And your boss is a contributing factor to keeping up morale in the workplace.

No matter if it is real life or fictional, it’s no secret that bosses have done horrible things, including insulting employees and overworking them, and sometimes worse.

To crown the world’s worst boss, Savoy Stewart took 10 well known horrible bosses and created a points’ scoring system according to some of the worst actions that they exhibited over the first five episodes that they were featured in.