Whilst we’re all aware of how much we spend on entertainment subscriptions, have you ever wondered how much your favourite TV shows have invested in YOU per episode?

One  site has crunched the numbers to reveal how much some of the most-loved TV shows spend per viewer, per episode.

“Binge-watching TV has become one of Brits’ favourite pastimes throughout the pandemic, with over half (56%) of people spending more money on streaming services. It’s interesting to see how much more money now goes into producing each show and how that’s coincided with a rise in subscriptions.” – Jonny Sabinsky, Head of Communications at thinkmoney

In third place is the ever-popular, The Crown. This has a whopping budget of £92 million for its series, which when paired with the 73 million viewers, they invested £1.27 into each viewer, per episode.

Comparatively, Lost came last in the findings. The show boasted an average of 13.9 million viewers per episode and a relatively low budget of £2.8 million per episode – resulting in a price tag of £0.21 per viewer, per episode.

Surprisingly, Game of Thrones and Friends are found to be in the bottom, too. Whilst they both had extremely big budgets of £11 million and £7.1 million per episode, their huge popularity has meant their ‘price per view, per episode’ were both quite low.

“With people potentially becoming wary of their finances as we leave lockdown, it’ll be worth keeping an eye on whether or not this volume of subscriptions is here to stay or just a flash in the pan.” – Jonny Sabinsky, Head of Communications at thinkmoney 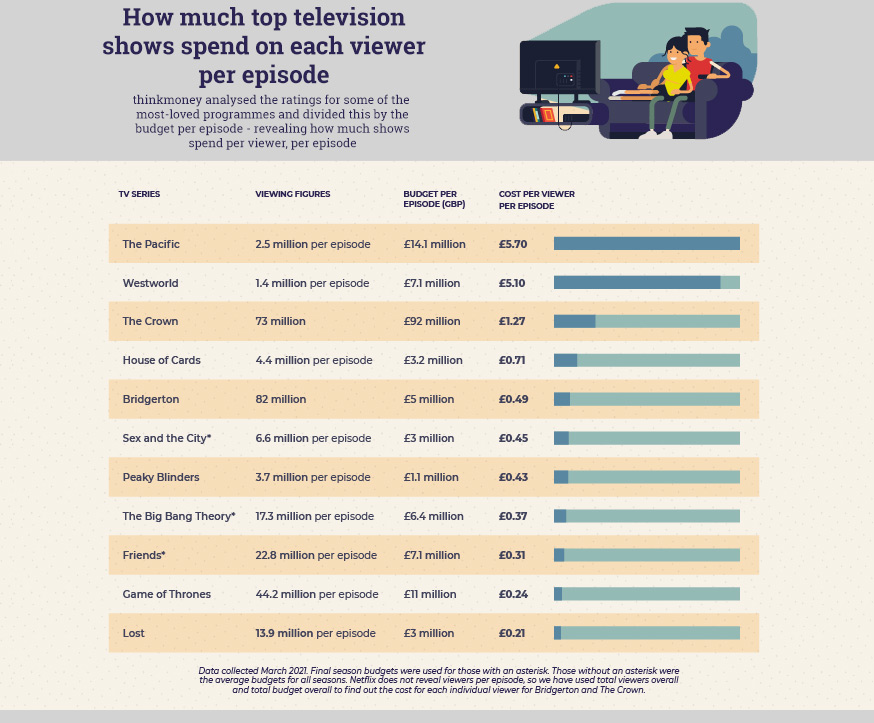 The research was carried out by thinkmoney