The telly names that put a smile on viewers’ faces according to BMIS scale.

The findings found that those taking part found that watching Alison Hammond increased their happiness by 250%.

Holly Willoughby came in second, with a 179% increase in happiness for the participants and in third place, Phillip Schofield, made them 164% happier, increasing the BMIS score by 64 points from 28 to a strong 74 points.

Not surprising for discerning viewers the last place was occupied by Piers Morgan, who had only an 11% increase in positive emotions from participants.

Pictured Top: Alison Hammond proves a hit with This Morning Viewers on ITV. Pictured Above: Ant and Dec remain ever popular with the Saturday Night Takeaway audience.

Eager to find out the TV presenter that brings the most happiness, OnBuy TV Department led a study using the BriefMood Introspection Scale (BMIS). The BMIS scale consists of participants rating the intensity of their positive emotions, such as happiness and optimism, the results are then collated to create an overall ‘happiness’ score out of 100.

Participants’ scores were taken before watching the video clips and averaged at 28 BMIS points. Their mood was then analysed after watching to note the percentage increase in happiness, upon the previous score.

Alison has been the regular This Morning Friday presenter since the start of the year, however, has been on our screens for twenty years while Surprise Surprise host Holly Willoughby has been with This Morning along with Phillip Schofield since 2009 and Phillip has been gracing our screens on both the BBC and ITV since the mid-1980s on shows such as Saturday Superstore, Going Live! Talking Telephone Numbers and Mr and Mrs. 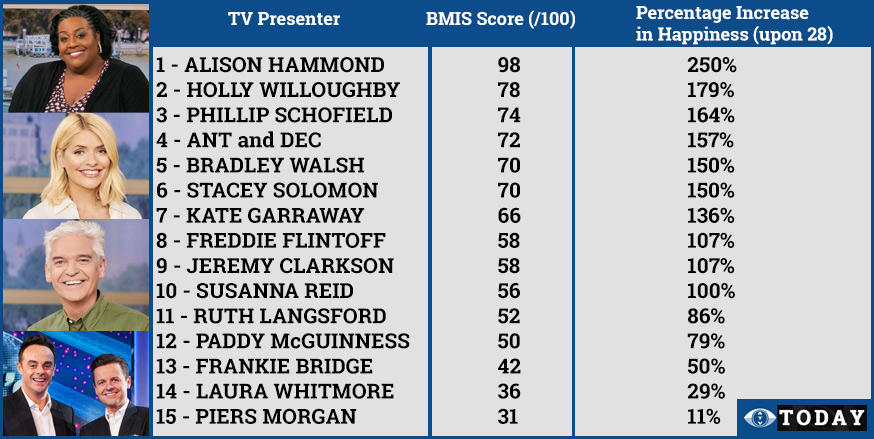 The information was created and researched by OnBuy.