Following the huge success of the 2018 Tusk Rhino Trail, Tusk has once again teamed up with Curator Chris Westbrook who has brought together a spectacular array of talented artists from the world of Art, Design, Film, Theatre and Comedy, to release phenomenal Pride Of Lion sculptures through the streets of London, and seven other locations across the world from Nairobi to The Hamptons.

The sculptures aim to highlight the magnificence of the lions, threats to their existence and the people and solutions working for their survival – raising awareness for conservation efforts across the world.

The lion sculptures will be displayed to the general public at a selection of iconic sites around the world including a number of UK cities (London, Edinburgh and Bristol), The Hamptons – New York, Sydney, Wellington and Nairobi, from 10th August until the end of September 2021.

London will be home to over 25 individually curated life-sized lion sculptures, the art installation will encourage visitors to follow the ‘trails’ via easy-to-use physical and digital maps, allowing them to ‘collect lions’ as they go.

“As one of Tusk’s longest standing supporters I couldn’t be more humbled and excited to be part of the Tusk Lion Trail 2021. Raising awareness and educating people about the impact of humans on our beautiful natural world and more specifically about threats posed to Africa’s endangered lion population is very close to my heart. Channeling creativity via art is a big part of my life and painting two lion sculptures for the Tusk Lion Trail is something I have very much enjoyed doing over the last couple of months. I am very much looking forward to seeing the pride on the streets across the world in August.” – Rolling Stones guitarist and Tusk Ambassador, Ronnie Wood 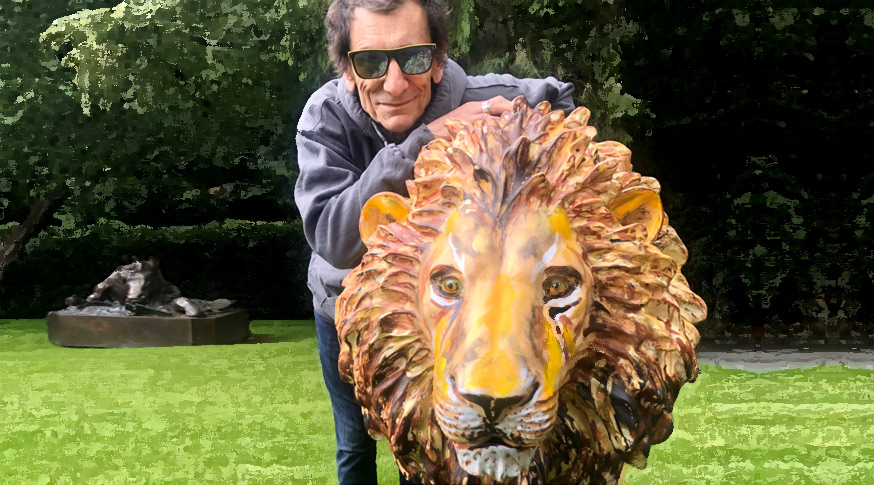 Following the interactive sculpture exhibition, the unique works of art that have been displayed across the UK will then be auctioned in London by leading global auction house Bonhams, on November 9th.

The US lion sculptures will be auctioned at an event held in conjunction with ACCF at The Wölffer Estate in The Hamptons, on August 27th. Three years ago, Tusk raised £750,000 with its Rhino Trail and is hoping to surpass this total by taking the art installation global.

Funds raised at the auction and through public donations will support the work of Tusk and its partners in protecting species and empowering communities across Africa.

The King of Beasts Big cats, the ‘King of Beasts’, lions have been central to human culture since our very evolution. Once roaming most of Africa and parts of Asia and Europe, the population of lions is estimated to have declined by as much as 50% over the past 25 years. The most recent estimates put the total population of lions at approximately 22,5001, occupying less than 8% of their historic range.

The future of the African lion lies in the ability of lions and humans to coexist. At the top of the food chain, lions only face threats that stem from human actions: habitat loss and fragmentation, prey depletion and human-lion conflict. More recently they have also been poached for their body parts (especially claws, teeth and bones) for use in alternative medicine, predominantly in the Far East.

As well as protecting some of the lions’ greatest strongholds and mitigating human-lion conflict, Tusk invests in initiatives working with local communities to catalyse innovation, utilise technology, change attitudes, and provide economic stability and empowerment.