Lemon, aka Leigh Francis, dressed head to toe in the iconic Ghostbusters boiler suit, gave a personal introduction to the highly anticipated blockbuster.

A lucky group of movie fans got to attend one of the UK’s first advance screenings of Ghostbusters: Afterlife at a special Showcase Cinemas event alongside telly icon Keith Lemon, on Sunday.

“The original Ghostbusters is an all-time classic and one of the films that I remember loving as a kid growing up.

“I was dead excited for the next instalment, Ghostbusters: Afterlife, to come out, and I wasn’t disappointed. The movie was brilliant – and getting to watch it from a huge leather reclining seat on the massive XPlus screen was amazing!” – Keith Lemon

The colourful comedian, a self-confessed film-buff and huge Ghostbusters fan, gave a personal introduction to the highly anticipated blockbuster before putting his feet up and enjoying the show with the guests. 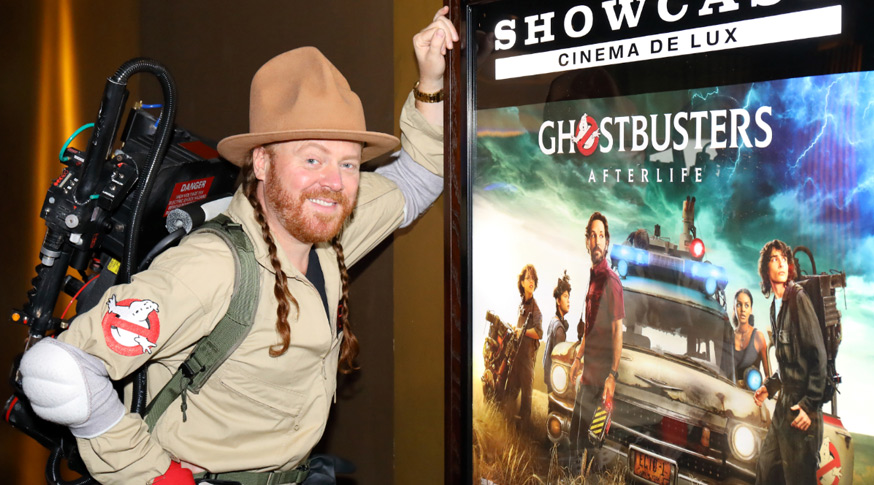 Keith arrived at the cinema dressed in a replica of the iconic Ghostbusters boiler suit, complete with an accessory belt. He was joined by a host of lucky VIPs, including members of Showcase’s free to join Insider loyalty program, which offers discounted admission and 10% rewards on every single purchase made at the cinema.

The audience was enthralled by the movie, which sees a single mum and her two children discover that they have a connection to the original Ghostbusters and their grandfather’s secret legacy. The special showing at Showcase Cinema de Lux Bluewater was the UK’s only public screening of Ghostbusters: Afterlife ahead of its official release exclusively at cinemas across the country later this week.

“The experience was made even more betterer by the fact that I got to enjoy it alongside a group of fellow film buffs.” – Keith Lemon

Audience member, David Rotherham said after the screening: “It was an absolute love letter to the Ghostbusters fans. I think the 30-year wait was worth it and it took us on a crazy nostalgic trip of good times. I’d rate it a solid 11 out of 10.”

And fellow Ghostbusters fan Chris Beldock said: “I was very overwhelmed by it. I think going into a sequel you might feel it’s not going to match up or it can be disingenuous, but I think because it’s made by the son of the original Director, everything about it felt extremely genuine and heartfelt. Ghostbusters: Afterlife is released on Thursday November 18th, with tickets available now. Find out more on how to become a Showcase Insider.

Limited season of Beauty and the Beast for London Palladium

Harry Styles backed for next James Bond at 66-1

Plymouth to host an array of epic events for 2022