Actress Paula Lane has spoken about her departure from ITV’s Coronation Street and the popular role of Kylie Platt.

What made you decide to leave?

I have made no secret of the fact that I never saw myself being in a long running drama for the rest of my career. I was only contracted for 6 months and ended up staying six years. Six years is a nice amount of time to make an impact, but not be typecast, I was very conscious of that, time goes so fast in soap, as we film ahead, I thought I am going to have to run and jump and see that decision through.

Were you surprised to be told she was being killed off?

I knew it was a possibility, they have free reign to do what they want with your character once you make that decision to leave and sometimes when it is a much loved character they want to go for a big impactful exit. I am more than happy with the exit and creatively I am excited to play it and see people’s reaction.

How did they tell you?

Kieran Roberts the executive producer me sat down explained how and why, I was excited. You don’t get to have that kind of exit every day and people will really remember it so I am really pleased. Hopefully it will leave the audience wanting more. Of course it is nice nice to have the door open, it gives you a kind of safety net but I hope I can go on to do other things, this is a great spring board I feel like I have been given so much opportunity here and I am so grateful to that.

Has that been tricky keeping the secret?

My family and friends kind of know not to ask, but I have a very tight circle of people who know. It is great that we are keeping the details of how she dies a secret though.

What was Jack’s reaction?

He was very laid back about it, but it is heartbreaking really because I could have seen them last a lifetime together. It is hard when you have someone you have worked with for six years turn round and say ‘I am going and I won’t ever be coming back.’

Will you take any mementoes?

No I don’t think so I think it has got to be clean break.

How is she doing in the lead up to this?

The family are still dealing with the aftermath of the body being discovered, Kylie is struggling with the fact that an innocent man’s name has been trashed and that David is alright with that. She feels really guilty and also is worried about Max and how he is coping with it all.

Gail doesn’t want to be in the annex any more, Gail tries to get Kylie and David to move in saying it could be a love nest, Kylie quickly realises it is not, it doesn’t sit well with her, she tries to make it her own by buying all these fluffy cushions and revamping it and it doesn’t feel right.

Then she finds out that Max is getting a hard time from the other kids so she has this great idea that they should start a new life and go off to Barbados. What is sad is that at this point we start to see the old Kylie and David come back as they plan their new life together and that is sad because we all know what is coming!

Will you be teary yourself?

I can’t quite go there, I have so many friends here and Jack really is great to work with, I love him to bits, it is going to be gut wrenching, it is safe to say the performances the viewers will be seeing will be real I think.

What would your dream job be?

I loved Marcella, loved the style, really gritty. ITV has got some great dramas on at the minute, so you just have to see. I would love to do something completely different from Corrie like a period drama, or sci-fi. And I would love to do theatre as well.

What’s been your favourite storyline?

It’s hard to just pick one. I loved spending time with Katherine Kelly and being in her shadow kind of thing when I started at Corrie. Then things got a bit more serious and Kylie slept with Nick, and we had ‘Is the baby Nick or David’s?’ thing. I’ve loved everything. I can’t really pinpoint one moment.

What will you miss the most and the least?

I won’t miss the many costume changes – it’s like going on a shopping spree everyday but without the end product. You know, you’re just constantly trying on clothes. I would never want the end product, either. I won’t miss the early starts, the drive. But I will miss the people, the buzz on set when a take goes well – we have so little time to shoot the scenes –when it just works, you go ‘Wow!’ and it feels great that you’ve managed to achieve it. Most things I’ll miss, I really will.

Is Kylie dying after killing Callum the ultimate soap justice?

I have to admit that when they made Kylie a murderer I did sort of think, ‘This means something quite big now.’ It does change things for the character when they commit a big crime.

Did that have any bearing on your decision to go?

I think it just reinforced the fact that they can do whatever they want to a character. And I still wanted her to be believable. There were so many parts of her that I’d played that I thought it was time for me to wrap it up.

As far as Kylie’s relationship with David is concerned, is this the best way for her to leave?

Yes – the family now get a clear cut end. She’ll forever be in David’s heart obviously but one of the best ways for her to go is not by choice. David has to try and move on if she is dead whereas if she had been in prison or had run away he would always be waiting for her. It will be a long process but will give him some great drama.

Do you think David will go off the rails after Kylie’s death?

Probably. It’ll catapult him into a new lease of life. The way she goes will lead to so much for Jack to be able play…

Is it one of the most shocking deaths in Corrie history?

Yes – Without a doubt.

I’m not just saying this because I’m involved but I don’t think I’ve ever read an ending like it. The audience are going to get a real sense of shock and surprise – how a sudden death is. They’re going to feel those emotions.

How are you feeling about having to play dead?

It is a bit weird.I just hope my eyes don’t start flickering. I’ve never done it before so I don’t know. I’ve not practiced staying very still or anything. That’s what I mean about being given a storyline like this. It’s a new avenue, something different.

What’s been your proudest Corrie moment?

Without a doubt the Live episode. The audience was completely oblivious to what me and Jack were doing logistically. In between scenes we were running around the set with about 30 seconds to spare. It was crazy. And then all those millions of people watching. It was an unbelievable feeling. 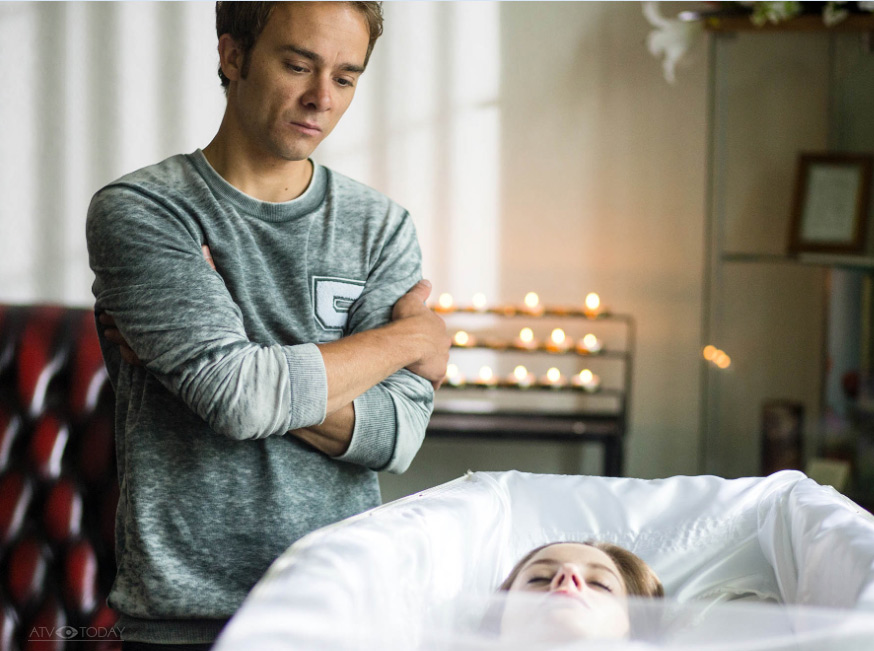