“When I was last here in the studios I had a lot more hair, and I had 20:20 vision and a 32 inch waist. Life has caught up with me. I had the best time here at Elstree.” – Sir Roger, speaking about the Elstree Studios.

Elstree Studios have been reflecting on the work of Sir Roger Moore. Roger, who died yesterday from cancer aged 89, was the star of The Saint for ITC-ATV from 1962 to 1969 with all 118 episodes produced at the Borehamwood studio site.

In 1962 ATV publicity for the show, which followed Simon Templar on his various adventures, creator Leslie Charteris said ‘I have been trying to make a picture of a man, changing, developing, a roaring adventurer who loves a fight. A dashing dare devil, imperturbable, debonair, preposterously handsome; a pirate or a philanthropist as the occasion demands. He lives for the persuite of excitement, for the one triumphant moment, a moment which is his alone.’

Cast in the star role was Roger Moore, the ATV publicity continues, ‘its an up to the minute role for Roger, after a lot of costume dramas.’ Roger, born in October 1927, in Stockwell, London, had studied at art school with the intention of becoming a cartoonist, and had a spell working for a newspaper in such a role. He gave up his drawing to study drama at RADA, then went into repertory theatre appearing alongside future ATV star Noele Gordon.

World War II cut his acting career short, however while in the Army he later joined their entertainment unit, including appearing in some Army instructional films. He made his big screen acting debut in the 1945 movie Caesar and Cleopatra, as an extra. Other work included as a model advertising a range of products including toothpaste and knitwear. He made his television debut as an actor on the BBC in March 1949 in the live play The Governess.

“We are saddened to hear the news of Sir Roger Moore’s passing. We were looking forward to welcoming back Sir Roger to celebrate the anniversary of The Saint at Elstree Studios this year. We already have a plaque locally and a neon saint sign hanging high on Stage 7,” – Roger Morris, Managing Director of Elstree Studios.

“I was very lucky to invite Sir Roger back to Elstree Studios in 2006 when we unveiled a plaque in his honour. We gathered various old stars together including Producer Robert Baker and some of the crew who had worked on The Saint at Elstree Studios in the 1960’s. The Saint launched Sir Roger into his international stardom where he went on to do James Bond.  He never took himself or showbiz seriously and was a practical joker on set.  He was a lovely man and a real gentleman. ” – Paul Welsh, local Film Historian

During the early part of the 1950s Roger tread the boards of London’s West End as well as touring with the Embassy Theatre company. In 1952 he flew out to America in the hope of making it big stateside. He landed a part in the television series World By the Tail alongside Diane Lynch. During this production he made a screen test for MGM, but at the time nothing came of it and Roger returned to London to appear in the BBC series I Captured The Castle co-starring Richard Greene. Then, out of the blue, came a telephone call from MGM. Roger quit the beeb programme to return to Hollywood.

However his time with Metro-Goldwyn-Mayer movies, he self confessed had been a disappointment, and not very successful. His seven year contract was terminated after only two years and three films made. He did however get to co-star alongside Elizabeth Taylor in The Last Time I Saw Paris.

Following MGM, Moore signed up to appear in Warner Bros’ movies, as well as a number of television series. His first major TV success was the ITV series Ivanhoe, which aired for 39 episodes from 1958 and saw Roger star in the title role. Other shows followed including The Alaskans in 1959 and 1960’s Maverick. It was however The Saint for ITC-ATV which would prove his next long running success.

In 2006, Sir Roger Moore returned to Elstree Studios for a ceremony to see a plaque unveiled in his honour, 35 years after his career took off. Elstree was then part of the Associated British Picture Corporation (ABPC) where the series was filmed from 1962 to 1969.

“I’m grateful for this plaque. It is going to be moved to Borehamwood High Street, which was used all the time in The Saint. It was meant to be the Champs Elysees, but all they did was flip the film – they forgot about the London buses. I just want to be assured that it will be high enough that dogs can’t reach it, because the critics have been doing it to me for years.”- Sir Roger speaking at the 2006 plaque unveiling

“Roger accepted the role of Simon Templar and the rest is history. That it became a great success was largely down to him.  In all my experience, I’ve never worked with a more professional, hardworking, more sincere actor. He also regularly played practical jokes on set, and praised him for his recent work with Unicef, the United Nations children’s charity.” – Robert Baker, Producer of The Saint

ATV publicity from 1962 notes what attracted Roger to the role of Simon Templar in The Saint, ‘At 6.ft 2, violence is something Roger abhors. So what attracted him most to the role of Simon is the fact the character has to use quick wit in place of guns, stealth and shrewdness instead of fighting and getting out of tight situations with only cool thinking and and cunning.’ Roger said at the time of his casting announcement “This modern Robin Hood appeals to me.” He was looking forward to the part much more than his earlier TV work in period swashbuckler Ivanhoe, which he told ATV, “I felt like a complete Charlie riding around in all that armour and that plumed helmet. In fact, I felt likea medieval fireman!”

Reflecting, in 1962, on his other big television moment, the American western based series Maverick; that too didn’t bring back fond memories for Roger, “I can’t stand the noise of guns going off, I hate wearing cowboy boots and the gun bruised my side.” The Saint wouldn’t prove to be a pain in the side, with smart suits and expensive shoes. In fact Roger and Simon Templar fitted well together, so much so Moore stayed with The Saint for seven  years, with all the interior shots recorded at The Elstree Film Studios for the programme.

“Roger Moore was an integral part of the success of Elstree Studios. The success of that show not only catapulted him in his career but cemented the studio as a legitimate place to film. We will miss him a great deal. He was a wonderful man and he leaves behind a great legacy on screen.” – Chairman of Elstree Studios Morris Bright

The Elstree Studios had been planning a celebration of The Saint this coming year, with Sir Roger top of the guest list. Roger Moore died yesterday, in Switzerland, from cancer. 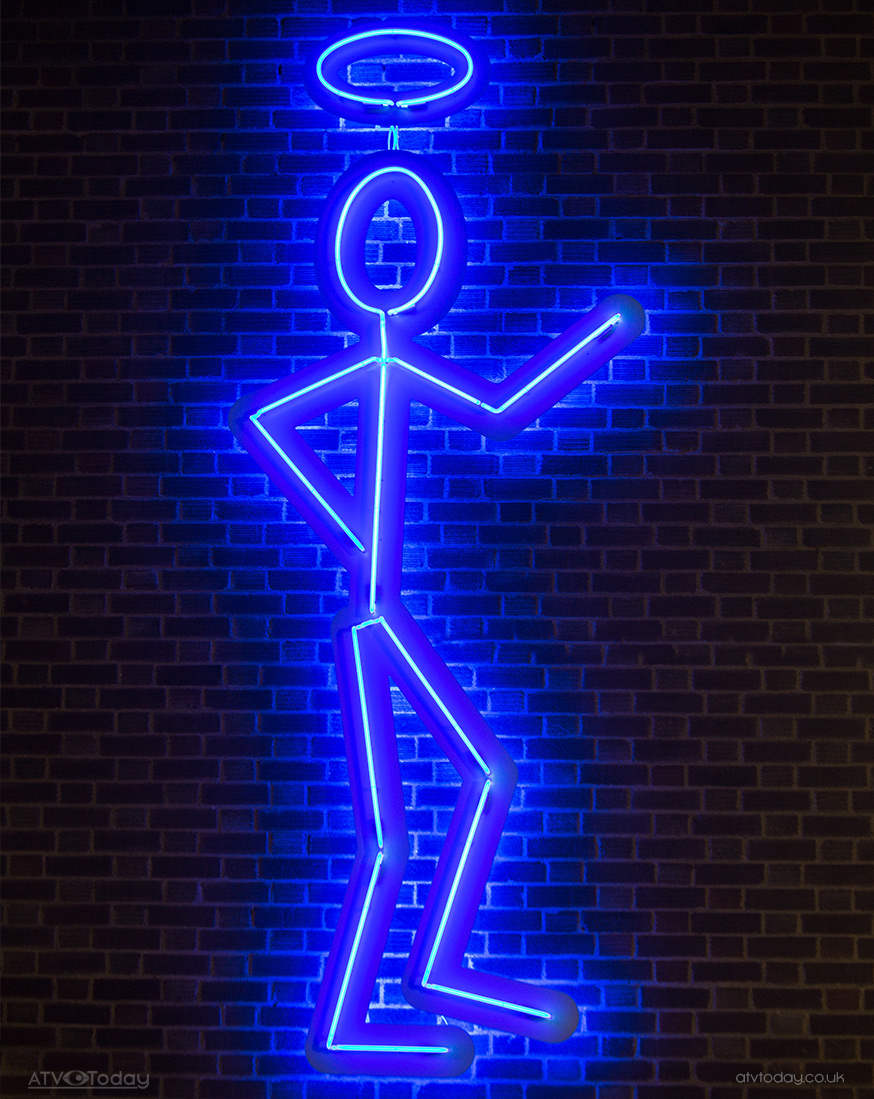 The Saint logo, in neon, on the side of The Elstree Studios.