With Christmas Day less than a month away ATV Today sent reporters Sue Jay and Chris Tarrant out to a Birmingham toy shop to ask local children what presents they would like for Christmas 1972.

Nottingham Virgin Record shop manager Chris Seale was cleared on charges of ‘exhibiting printed matter of an indecent nature’ by displaying the cover of the Sex Pistols LP Never Mind the Bollocks as ATV Today reported.

Bev Smith has a  brief interview with Chris Seale. Unfortunately, an interview with Johnny Rotten is currently missing from the MACE ATV News archives.

The first escalator to be installed at the all-new sixties indoor Bull Ring Shopping Centre was opened by a flower seller.

The shopping complex was built on a site that had hosted a shopping market since 1154. A covered Market Hall was opened in 1835, it was destroyed in 1940 by a German WWII bomb. The sixties shopping centre began construction in 1961, opening in 1964. It was replaced by the current modern shopping mall when construction began in 2000 and opened to the shopping public in 2003.

The report shows several shots of children looking at Christmas displays and meeting Father Christmas, this originally would have had a festive backing track however this doesn’t survive with the edit (Probably played in live from the studio as the report aired).

ATV News reporter Tim Downes talks to shoppers asking what they’re looking for, if the assistants are helpful and how the prices compare with previous years.

The footage was recorded in the Lewis’s and Grey’s Department Stores, Birmingham. 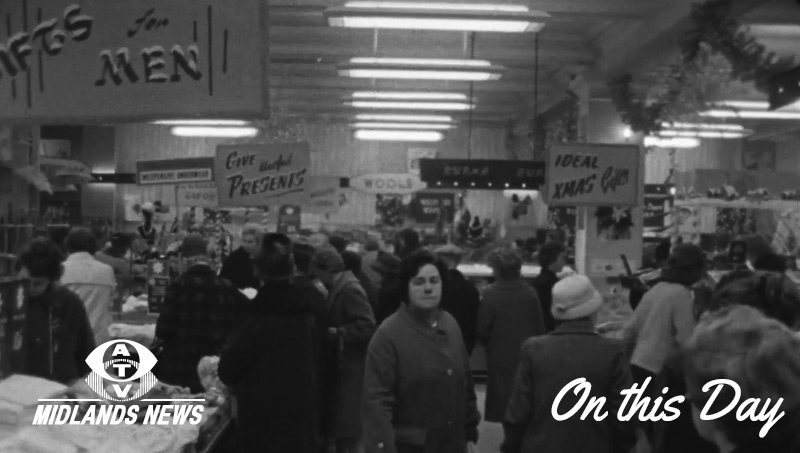 ATV Today interview with Ian Daly who explained that when his wife went off sex after the birth of their second child he used hypnosis on her to improve their sex life. He is now offering the ‘treatment’ in a clinic in Stafford.

James Boyden, Parliamentary Secretary to Ministry of Works at the ‘topping out’ ceremony at the GPO Tower in Birmingham.

The report features views of the GPO Tower with scaffolding, a view from the top looking down at the city of Birmingham and the ‘topping out’ moment.

ATV Today’s Sue Jay interviewed Ann Summers, who was planning to open ‘a sex supermarket’ in Birmingham city centre. The report also speaks with David Hopkinson, editor of the Birmingham Post, who was very much opposed to the idea of the centre of the city having a ‘sex shop’.

Burford Grammar School’s pig farm had been placed on the official list of the Pig Industry Development Authority.

Forty years after Coventry was razed to the ground by German bombers, a service of reconciliation was held in the new Cathedral.

ATV Today reporter Wendy Nelson spoke to the former Prime Minister. Edward Heath after the service. He said that Coventry had learnt that there was nothing to be gained from resentment, anger and looking back all the time.

Policewomen Hedda Perkins and Francesca Terry, the Midland’s first all-woman police patrol were seen at work on the A45 near Nuneaton. The clip shows  PC Perkins and PC Terry in their Triumph patrol car.

The Duke of Edinburgh paid a visit to the recently officially opened (March 1970) ATV Centre to find out about some of his favourite programmes including The Golden Shot and Crossroads!

The report sees the royal getting out of a car and entering Lewis’s department store in Birmingham. Inside he views displays about the Duke of Edinburgh Awards Scheme. We then see the royal cars arriving at the ATV Centre. In the loading bay area, the Duke is met by ATV management including Lew Grade.

ATV Today’s Peter Matthews interviewed Lynda and Bernadette Nolan about their music and how they started in show business in Ireland before moving to Blackpool and building a following in the working men’s clubs.

At the time The Nolan Sisters were about to embark on a ‘regional tour’ starting with a gig in Birmingham.

ATV Today sent John Swallow out onto the streets of Birmingham to find out from locals ‘how often do you think about sex?’

ATV Today reporter Wendy Jones headed to London to chat with Cynthia Harris, the actress who was to play Wallis Simpson in the Thames Television serial ‘Edward and Mrs Simpson’.

Outside Mrs Simpson’s home in Regents Park, Wendy interviews Cynthia about her role and the series which depicts the romance between King Edward VIII and Wallis Simpson.

Lionel Hampden reports for ATV Today from Derby on a sale of fixtures and fittings from closed railway stations.

He looks at some of the items that include locomotive nameplates, numbers, station signs, lamps and chairs, some dating back to the early days of the railways including a chair from the London to Birmingham railway of the 1840s and a stained glass window from Derby station.

The house has a plaque noting that the building is now known as ‘Guy Fawkes House’. The old Lion Inn is where the gunpowder plot conspirators met on the fifth November 1605 to await news of the destruction of Westminster.

ATV Today takes a look at the latest women’s fashions in crocheted materials modelled at locations in Birmingham.

The feature brings 1968 fashions and city locations to screen for a huge dollop of nostalgia for those who remember the city this way.

Bev Smith climbs the 180 steps up the clock tower of Lincoln Cathedral with 71-year-old George Stowell and learns how he maintains, winds and keeps the clock accurate.

The report features the two men winding the clock mechanism and listening to the radio as Big Ben strikes to record the clock’s accuracy.

20 years after the official opening of the M1 motorway ATV Today sent reporter Tony Maycock out to join a champagne party held on one of the original motorway coaches.

The report has an interview with coach driver Ernie Hawkins who has been driving on the M1 since it opened, recalling how coaches and the new road cut journey times to London. AA patrolman Stan Hallard talks about helping many motorists on their way, including Enoch Powell and Dorothy Squires.

AA Inspector, Don Woolhead, reflects on the early days when it was often necessary to pour petrol onto the road and ignite it to warn oncoming traffic of an accident.

One from the Central News archive as Crossroads reaches its 20th anniversary.