A look at what the television version of ATV News and ATV Today was reporting on between February 1956 and December 31st 1981 as revisited across July 2020.

John Swallow visited Newtown in Powys following reports of a ghost that was seemingly haunting the council house of Mr and Mrs John Owen and their six children.

ATV cameras popped over to Coventry to see the latest in public house design with the opening of The Standard at Hockley Lane, Eastern Green.

The pub was renamed Poachers Retreat in 1983 and demolished in 2012.

See the Video at MACE Archive>> 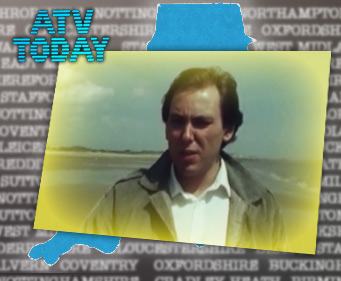 ATV Today’s Terry Lloyd visited the Butlins holiday camp in Skegness. This was the very first Butlins and is still the largest. Terry talked to some Midlanders on holiday there. Enjoy vintage 1980s views of Butlins at Skegness including shots from the monorail.

Terry ‘escapes’ out of the camp by giving the gatekeeper a stick of ATV Today rock. Terry Lloyd moved on from ATV to Central Television before joining ITN in 1983.

Lloyd died on 22 March 2003 while covering the events taking place during the 2003 invasion of Iraq for ITV News (ITN). Working as an independent reporter not operating within coalition forces, Lloyd and his team of two cameramen and an interpreter were caught in the crossfire between American and Iraq forces during fighting near the Shatt Al Basra Bridge in Basra, Iraq. In 2005 ITV Central’s East Midlands news centre was named Terry Lloyd House.

With so much misery around ATV Today’s Peter Plant went in search of some ‘good news’.

Peter asks the landlady of The Cavalier Inn if there is any good news to hear. She tells him of a recent successful charity collection. Plant next interviews a group of men in the pub asking about their good news and finally he helps to repair to the pub’s glass washing machine which has broken down.

John Swallow met the proprietor of The Swan pub at Compton in Wolverhampton, and her collection of matchboxes including an ATV addition.

John Swallow meets Birmingham keen gardener Marian Roberts and her 600 cacti in the greenhouse of her Wythall home. Mrs Roberts describes various species of cacti and explains how they should be looked after.

Woodlice racing was taking place at Brockhampton in Gloucestershire as ATV Today’s David Eggleton reported. David interviews one of the organisers, John Lanfear who talks about the diet and training required for racing woodlice. He also claims that the event is connected with an ancient fertility ceremony.

The cameras capture one Woodlice race that included an entrant from ATV named William.

ATV Today took to the streets to find out what women thought about views by Cambridge Professor, Ivor Mills who claimed that career women would start developing male hormones and were in danger of growing beards and losing their hair.

Tony Maycock talks to career women from the Midlands, including Councillor Freda Cocks, Lord Mayor of Birmingham and sportswoman, Rachael Heyhoe-Flint to see if they feel hairier and balder.

ATV Today visited the Belper Arms Inn as reporter Gwyn Richards popped into the pub at Newton Burgoland in Leicestershire due to many stories that the boozer was reputed to be haunted.

The report contains: Gwyn Richards is seen approaching the Belper Arms pub driving a Rover 2000. He gets out of the car for a piece to camera in which he explains that the pub’s ghost, ‘Five To Four Fred’ (due to the time he tends to appear), “likes the girls – he saucily slaps their bottoms, sometimes strokes their faces and even pinches them.”

Television actress and comedian Beryl Reid – soon to be seen in ATV’s sitcom The Most Likely Girl alongside Noele Gordon (launching in September ’57) – opened the new banana storage areas at the British Railways Curzon Street goods yard in Birmingham.

The report contains: ‘Beryl Reid arrives at the yard in a Ford Model T (promoting a Birmingham Ford dealership) and is then taken on a tour of the banana storage area.’ 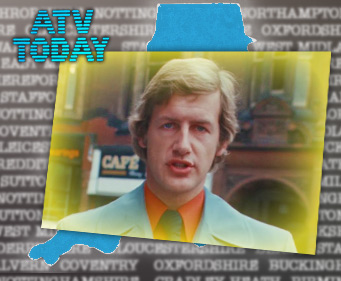 Bob Warman reports from Yardley Wood on proposals to build slim-line houses that at twelve feet wide will be the narrowest built in Birmingham since the nineteenth century.

During Bob Warman’s piece to camera in this item, he used a mallet he had borrowed from the prop stores at ATV in Birmingham.

Unfortunately, by using the mallet himself (as an NUJ member) rather than bringing a props man to the location shoot he angered the broadcast trade union who blacked the following night’s broadcast of ATV Today.

The report contains: ‘Bob begins the item with a piece to camera on a plot of land at Yardley Wood. He knocks in a wooden stake and marks out twelve feet to demonstrate how narrow the proposed houses will be. He explains that Birmingham’s Planning Committee are not convinced that the house design is suitable and are therefore visiting a similar development in Cheshire to talk to residents. Warman then conducts vox pops asking if people would like to live in such a small house.’

The report contains: ‘Shots of Diane Hickingbotham being crowned Miss Britain in the Mecca sponsored event held in Birmingham. Reg Harcourt talks to Diane about her victory. She talks about rumours that she is planning to change her name.’

Diane Hickingbotham did in fact change her name shortly afterwards to Diane Westbury going on to win the Miss United Kingdom contest in September 1963 and Miss Great Britain in 1965.

Tony Maycock reported from Tenbury Wells, Worcestershire, where the local cinema had been taken over by the town’s people and was being run as a community cinema, staffed by volunteers. The venture proved a success and most recently the cinema was operated by a charitable trust since 2012 onwards. The foyer, however, was damaged by water in February 2020 and Covid-19 has seen it out of business since March 2020. Hopefully the 1937 art deco Grade II listed building will see its doors reopen soon.

Back in 1979 though, ‘Tony Maycock visits the cinema and talks to the ticket seller, an usherette, the projectionist and the cinema organiser.’

ATV Today met up with the latest music sensation from the midlands, UB40.

The report contains: ‘We see shots of the Handsworth group in various settings, including a home recording studio. Cut to their hit single, ‘Ivory Madonna’.’ 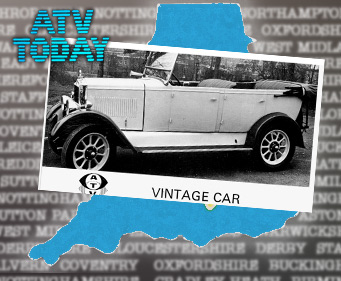 Bev Smith joined Crossroads actress Noele Gordon for a drive around in ‘Harriet’, the vintage Morris Oxford that had been rebuilt by British Leyland apprentices for ATV over a series of reports for ATV Today.

Noele learns to drive the car as it is to now feature in episodes of Crossroads, with sequences recorded across the West Midlands with the car that dates back to 1927. The scenes will be set to new cast member Stephanie-De-Sykes’ song Born with a Smile on my Face, specially written for the series by Simon May.

The car proved so popular with ITV viewers she was given her own ATV photo card to send out to fans.

The report contains: ‘Bev Smith explaining to Noele Gordon how to drive ‘Harriet’, the vintage Morris Oxford that has been rebuilt by British Leyland apprentices for ATV. We see Noele and Bev driving ‘Harriet’ in Birmingham.’

ATV Today’s Bev Smith took a flight on the Goodyear airship Europa during its journey over the Midlands.

Later, Bev has a chat with the French born pilot about the controls and techniques of flying.

It was the 38th pilgrimage to the war memorial at Crich in Derbyshire by the Sherwood Foresters army regiment As ATV Midlands News reported. 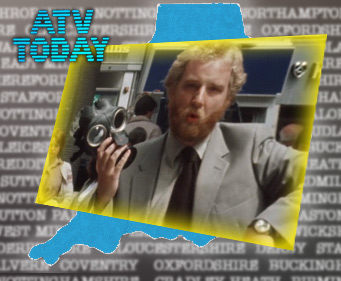 Geoff Meade reports for ATV Today on six Oxford teenagers who were spending two weeks in a make-shift nuclear fall-out shelter in Oxford city centre to highlight the inadequacy of Britain’s defences in the event of nuclear war.

The report contains: ‘Shots of the students inside the shelter that they have assembled in the Oxford shopping centre. Close up of a copy of the government’s pamphlet ‘Protect and Survive’ being leafed through.

‘Interview with Alex Christou, a member of the Young CND, who said that hygiene and cooking had presented problems. He also talked about the reaction from the public. Geoff Meade piece to camera with a wartime gas mask. It took the students 80 minutes to assemble their shelter; in the event of a nuclear war they may only have four.’

ATV Midland News took a look at a new helicopter service which will link Birmingham with Leicester and Nottingham that was launched on July 2nd by BEA at Elmdon Airport.

The report contains: “We first see a Sikorsky helicopter, operated by BEA, landing at Elmdon airport. A group of dignitaries, including the Conservative MP John Profumo in his role as the Joint Parliamentary Secretary to the Ministry of Transport and Civil Aviation, then board the helicopter.”

ATV Today brought footage of a two hundred foot gas tower in Corby that was demolished following the plant’s closure. By 1982 the former steelworks site will be flattened.

The report contains: “John McLeod interview with explosives expert, John Briddon who likens it to felling a tree. Skyline shot of Corby showing the closed steelworks. Views of the gas tower being demolished.”

The previous month’s archive news reports can be seen on the next page.