Stacey Solomon’s sister Jemma Solomon appeared on Loose Women today and spoke about being Alan Sugar’s business partner, plus she revealed some home truths about her younger sister Stacey.

Jemma revealed Stacey duped her now-husband when they first started dating. “When I met my now husband, we met in a nightclub and I said, ‘You’re never going to remember who I am, what I look like.’ He said, ‘I will.’ He turned up at my house, so I said to Stacey, ‘Can you go and get in the car with him please because he thinks he knows what I look like?’ She got in the car and he drove off with her!”

On their rows growing up, Jemma said: “We used to argue, we were typical teenagers, [Dad] ended up building a wall in our bedroom to give us our own space.”

Poking fun at Tap to Tidy Queen Stacey, Jemma also joked: “She thinks she’s the tidiest sister, for sure.” 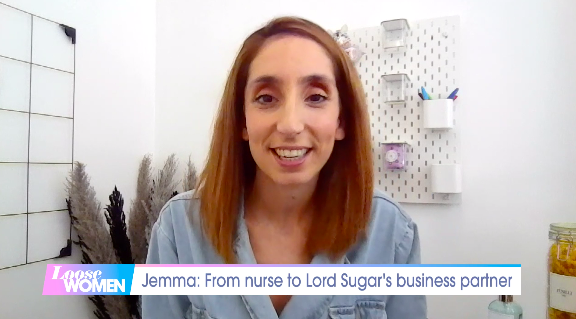 Jemma is a part-time pediatric nurse and she also started her own label business during lockdown. Talking about launching her business, Jemma said: “I’ve been labelling for quite a few years, we’ve had a label maker since 2016. I was forever labelling around the home and I had a balloon business, where I labelled them, and kids’ water bottles. It grew and grew… so I decided, ‘Let’s give this a go, it’s fun, exciting and really useful.’ And it’s the best decision I’ve ever made.”

On getting an investment from Lord Sugar, Jemma said: “Once I sent the email, I was thinking, ‘Is he ever going to reply? What’s going to happen?’ We didn’t know. For ages, it was quite quiet and all of a sudden we heard back and it was like, ‘What do we do now?'”

She added: “It was such an exciting time, but also so strange. It was right in the middle of the pandemic, so you couldn’t see anyone,so everything was done over Zoom and it’s a very different way of meeting somebody. But I’m really happy.”

Loose Women weekdays from 12:30pm on ITV and ITV Hub