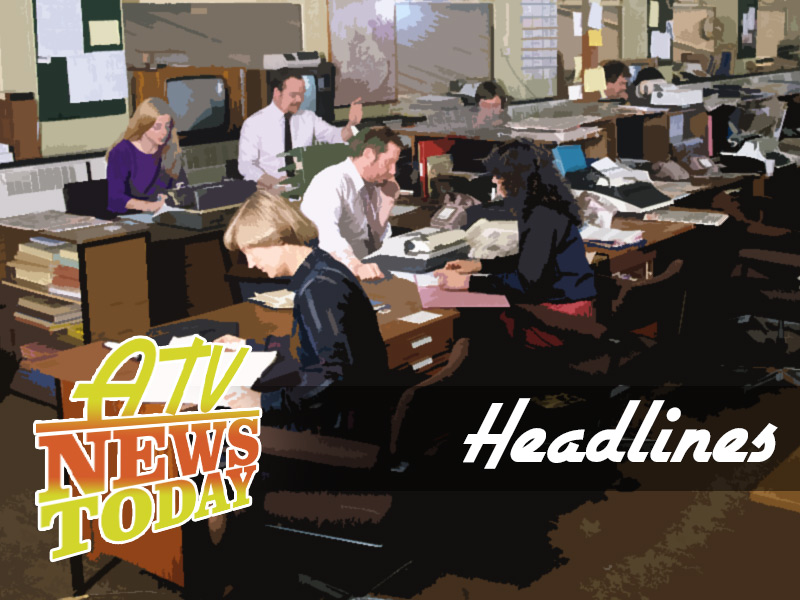 A look at what the television version of ATV News and ATV Today reported on between February 1956 and December 31st 1981.

In 1964 a magazine series, ATV Today, was added to the schedules and by 1970 the programme had been extended to include the evening’s news content, with the stand-alone news slot merged into the production.

First aired from the Alpha Television Studios in Aston, the news transmitted from the ATV Centre in Birmingham from 1969 onwards. ATV Today provided commercial television in the Midlands with news and feature reports until 1981. Hosts of ATV Today included Anne Diamond, Nick Owen, Bob Warman, Sue Jay and Derek Hobson.

Chris Tarrant visited the Shutter Inn at Gotherington in Gloucestershire, for ATV Today to meet Jim the donkey that will not drink water but consumed five gallons of beer a day.

Chris sees the reaction of the boozers regulars as well as a chat with the landlady of the pub about Jim’s drinking exploits.

In this ATV Today feature Terry Thomas heads to the River Dore in Herefordshire.

Nick Owen visited three former footballers to discover what they do for a living now.

Peter Broadbent is also interviewed. He used to play for Wolves, owns a children’s clothing shop in Halesowen.

Finally, Norman Deeley is interviewed. He is a lorry driver. He talked about his Wembley game for Wolves and when he played for England in a South American tour.

John interviews Arthur Allen from Brimfield in Herefordshire, who was an avid collector of junk. At that time in 1981, he was searching for pieces of barbed wire which he sent to America to be sold to collectors there.

Allen explained that old barbed wire over a century old is highly collectible in the USA and that he searches farmland in the Midlands trying to find examples.

Beryl had been a regular face on television since the 1950s and films since the 1940s. She appeared on ATV Midlands during its first year on air featuring as a lead star of four-part sitcom The Most Likely Girl alongside Noele Gordon. The show saw neighbours, one posh (Gordon) one common (Reid) and how they interacted with the various goings-on in each others lives.

On this Day in ’81 Anne Diamond vox pops for ATV Today people in Coventry asking them if they are proud to be British. Passers-by talk about the Royal Family, armed forces and British television newscasters.

Television in 1981 was of course ‘gearing up’ for the wedding of the year – no not Ken and Diedrie in Coronation Street – the royal union of Prince Charles and Lady Diana.

A Chemist Shop in Aston had remained untouched for decades.

ATV Today sent Tony Maycock to take a look at the quaint establishment on the corner of Hubert Street. This old-fashioned chemist shop had been cut off from most of the local residents by the Aston Expressway designed for better access to Birmingham city centre. However, the shop had survived despite access problems and only a handful of dwellings in the surrounding streets remaining.

Tony interviews owner Mr. L. Morgan about why the shop hasn’t changed since 1910 and the kind of customer he gets in 1972.

Sadly after Mr. Morgan’s death, the shop closed and a little bit of history went with him, the premises later in the decade demolished to become a car park. The area also lost further terraced housing in early 1980s and the local vicinity became unsavory, falling into a decline.

ATV Today reporters Wendy Jones and Val Lewis attempted to ride a tandem bike in Birmingham. The mode of transport became a ‘famous’ joke in the routine of ATV star Larry Grayson when he would discuss riding a tandem with his friend Everard Farquharson.

Sadly neither Everard or Larry were in Birmingham to show Wendy and Val how to cycle that bicycle made for two so the reporters had over to two other women who also try to ride the bike with limited success.

ATV Today’s Lionel Hampden interviewed Trevor Poutney, a rag and bone man in Nuneaton who did his rounds wearing a pinstripe suit and bowler hat.

Trevor is seen collecting items from an ‘everyday home’ with a young mother donating her unwanted wears. Mr Poutney then explains as to why he doesn’t wear the usual get-up that rag and bone men are usually accustomed to wearing, notably overalls.

John Swallow vox pops asking people if they enjoy kissing following a newspaper report about the discovery in America of a disease called mononucleosis that can be transferred by kissing.

ATV Today reported on a fire at ‘The Hotel’ at Church Stretton.

The short footage of the exterior and damaged interior is brief, however, this hospitality establishment inferno led to major changes in how blazes were handled in motel’s, guest houses, hotels, and B&Bs in the UK.

The Church Stretton, Shropshire, hotel fire claimed the lives of five people, three children, and two adults. The latter were staff members while the youngsters were staying with their parents for one night at The Hotel.

A memorial to staff members Olive Guest, 50, a chambermaid, and Mary Wilkinson, 18, a waitress along with twins Jonathan and Alistair Goulder, seven, and their nine-year-old brother Korwin is displayed at St Laurence’s Church, Stretton.

Before the blaze guests were expected to alert staff and guests of a fire vocally, there were no legal requirements for alarms or even smoke detectors. This was the start of a change in hotel safety.

On this day in 1977 ATV Today reported how Hay on Wye had declared ‘Independence from the UK’.

Interview with ‘King’ Richard Booth, on Hay on Wye becoming a state rather than a town and the international tournaments they will arrange for the future, including an international sausage championship.

The report features the H-o-W standard flag being raised at Hay on Wye castle. The village in Herefordshire declared its ‘Independence’ in protest to the village being made part of the Borough of Brecon in 1972.