“I cannot thank ITV enough for their wonderful anniversary gift. It is an honour to have a portrait painted and is always a joyful reminder of my sixty years in Coronation Street, something that I will always treasure. Thank you, ITV, and artist Michael Koropisz.” – William Roache:

To mark six decades of Ken Barlow, ITV and Coronation Street bosses commissioned Manchester-based classical portrait painter, Michael Koropisz, to paint a portrait of the actor behind the character who has given the serial some of its most memorable moments. The painting will hang in pride of place in Roache’s Cheshire home. Michael specialises in grand, elegant portraits of notable figures who commission his work for their own homes or private collections.

Ken was first seen as part of the Barlow family in the first episode in December 1960 live from Granada Television’s former Quay Street Studios in Manchester. The character has gone on to marry several times, although his most fondly remembered union is that with the late Anne Kirkbridge as Deirdre Barlow.

Ken has worked in a number of jobs over the years from school teacher to the editor of the Weatherfield Recorder free newspaper, a long-term rival to the bigger Weatherfield Gazette local tabloid, and even serving up lunches in Roy’s Rolls.

He is now the head of an ever-growing family of Barlows, all with their own dramas that keep Ken centre of the action.

“I am so grateful to have received this prestigious opportunity. This has been a great experience, not only because of its significance but because it led to a wonderful, unprecedented, life-long friendship with myself, William and his family.

“I would also like to thank everyone at Coronation Street for their support and send my congratulations. And to William, I send my compliments with this message – “William, I lay the first stroke of paint as your artist and the last as your friend. Here’s to the 60 years!” – artist Michael Koropisz

The portrait was unveiled live earlier today (30 November) on ITV’s This Morning as TV reporter Sharon Marshall interviewed Bill about his Coronation Street career, retaining his status as the longest-serving actor in a continuing drama in the world and how he only ever expected to play Ken Barlow in the then Manchester-based programme for 6 weeks.

Adhering to the Government’s health and safety guidelines for TV production, Bill was filmed by This Morning unveiling the portrait which Michael was able to paint during the lockdown. Fortunately, Bill had undertaken sittings for Michael in January and February of this year, which meant Michael had already made important decisions about how he was to capture Bill.

In keeping with social distancing guidelines, 25-year-old Michael, who achieved a Fine Art and Art History degree in 2018, taught himself to paint in the traditional style whilst studying at the Manchester School of Art. He was present in Bill’s garden to see first-hand the reaction to his work.

The portrait is the most iconic to be created for soap opera since that of Mrs Nell Mangle in Neighbours in the 1980s.

“Bill Roache has been the essence of Coronation Street for 60 years so what better way to capture the essence of Bill than in a specially commissioned portrait. The portrait will celebrate on canvas the fact that Bill appeared in the very first episode of Coronation Street and is still going strong today and will be a fitting tribute to someone who has inspired and welcomed to the show many generations of new actors.” – Managing Director for Continuing Drama and Head of ITV in the North, John Whiston 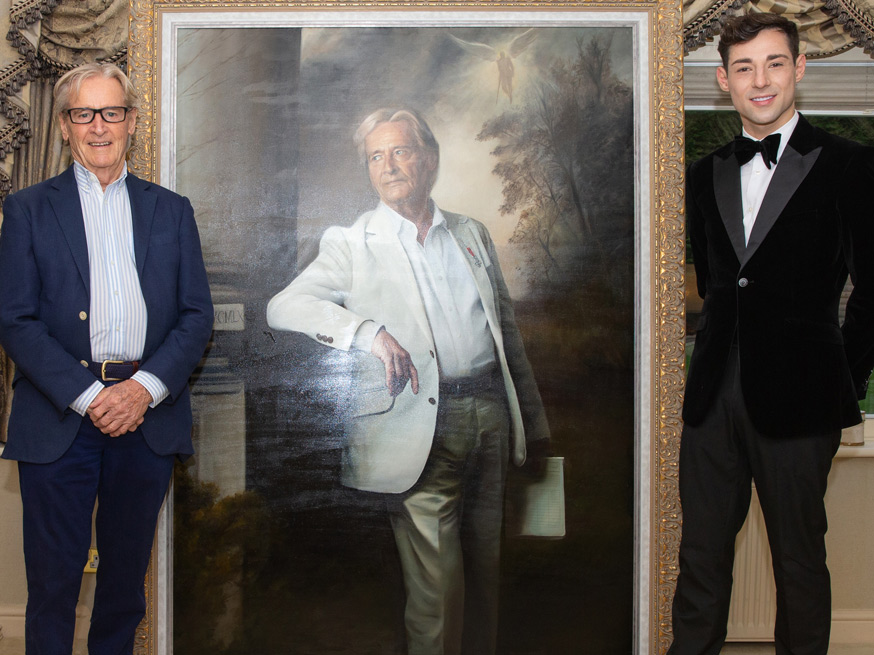