BBC Elstree has released the images ahead of Charlie’s on-screen return.

She’s back – Charlie Brooks is back in Walford as she prepares to reprise her role as Janine Butcher, the Beeb confirmed this evening. Despite being away from Albert Square for over seven years, one thing viewers can be sure of is that wherever Janine is, drama is never far away…

“I am beyond excited to be slipping back into Janine’s shoes and returning to the square. The time feels right and I can’t wait to find out what she’s been up to for the last seven years! She is and always has been SO much fun to play. Feels a bit like coming home. It’s good to be back.”

The character has – thanks to her scheming, tumultuous relationships and explosive feuds – been at the centre of a number of unforgettable storylines in the BBC soap.

Brooks took over the role of Janine in 1999. The character had been a part of storylines on-and-off since 1989, previously played by Alexia Demetriou and Rebecca Michael.

Ian Beale was one of Janine’s clients when she was on the game in 2002.

Janine was last seen heading to Paris on 20th March 2014 to pick up her daughter Scarlett but her whereabouts have been unknown since then. With Scarlett also set to return, Janine’s sudden reappearance will likely send shockwaves around Walford and with enemies to boot around every corner, trouble will no doubt follow her back to E20.

On April 22nd this year The Sun reported that the actress has agreed to return to the BBC One soap and that bosses have lined up a “huge” reintroduction storyline for her.

A troubled young girl, Janine grew up to become one of soap’s biggest bitches with a host of dastardly deeds to her name including marrying Barry Evans for his money before pushing him off a cliff. She coldly watched as Barry drew his last breath, ignoring his pleas for help.

She attempted to kill her second husband Ryan Malloy by poisoning him after she found out that he had been cheating on her with Stacey Slater, while her third husband Michael Moon’s attempts to kill her backfired when Janine got to the knife he was reaching for first. Other explosive storylines over the years include prostitution, agoraphobia and drug addiction.

Janine tried to marry David for his money; his heart gave way when her true identity was exposed

“Janine is one of EastEnders most iconic characters who is loved, and often despised, in equal measure by viewers and all those in Walford. Charlie’s portrayal of Janine over the years has created some of EastEnders most memorable moments and we are all really excited to see Charlie bring her incredible portrayal of Janine back again. We have lots of drama in store for Janine, in fact it may be wise for some of the residents of Walford to invest in some slip on shoes…”

Brooks originally played the role of Janine between 1999-2004, before returning to the soap in 2008 for week of episodes that saw Janine’s father Frank laid to rest. The special block of episodes were in tribute to the actor who played Frank, Mike Reid, following his own passing the year before. This whet Brooks’ appetite and she agreed to a full-time reprisal of Janine later that year, continuing through to 2014.

The actress took an extended break from EastEnders in 2012 to participate in the ITV reality show I’m A Celebrity… Get Me Out Of Here! – she triumphed over Pussycat Doll Ashley Roberts to win the series. Her other TV credits include Bleak House, Heartbeat, Wired and Suspects.

Stacey Slater was another of Janine’s sparring partners 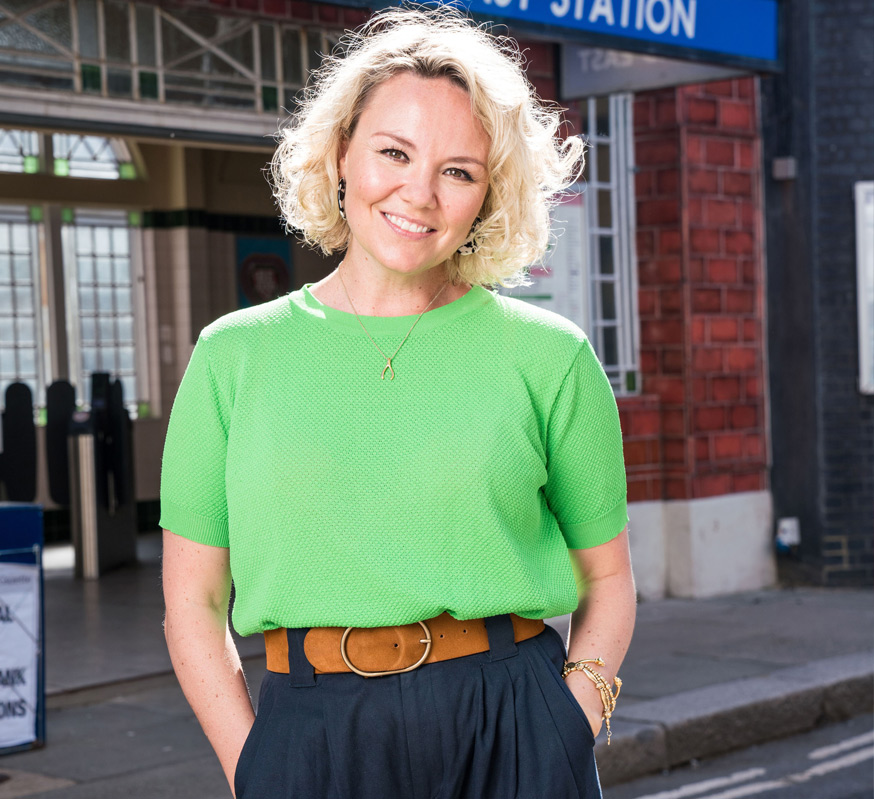 The bitch is back in town.