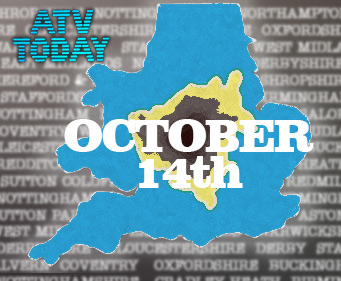 ATV Today’s Wendy Nelson spoke with comedian Eric Morecambe, one half of the Morecambe and Wise double act, at the 1980 Motor Show at the NEC near Birmingham.

The unconventional interview takes place on a large slide with the pair slowly slipping to the bottom. When asked where sidekick Ernie Wise is, Eric, retorts that “he’s here at the bottom waiting for us with his mouth outstretched!”

Eric and Ernie were hugely successful stage performers before, after a failed start with the BBC in the 1950s, becoming household names with their ATV Elstree produced Two of a Kind and Morecambe and Wise sketch shows with ITV (1961-68) before becoming national treasures with their BBC output from 1968 to 1978. Later years were spent at Thames Television (1978-84) but the best years had been and gone.

Eric died in May 1984 aged 58, following years of heart problems. He had just finished an ‘Evening With‘ event at the Roses Theatre in Tewkesbury, alongside entertainer and Crossroads actor Stan Stennett.

One thought on “On this Day 1980: Eric Morecambe at the NEC Motor Show”

River City: Bob has some making up to do while Nicole decides to take matters into her own hands