As the boozer goes up in flames, a look back at the Woolpack years…

“It’s not just the Woolpack that goes up in flames on Christmas Day, as secrets and lies explode, ripping through the lives of some of our much loved villagers and making it a Christmas they’ll never forget” – Producer Kate Brooks

In recent weeks, Al Chapman (Michael Wildman) has been conniving and plotting to get his hands on the Woolpack as he plans to turn it into luxury flats. Having succeeded in investing and becoming a partner, he has already inflicted major changes on the team. But will this Christmas Day inferno mean his plans have gone up in smoke?  Or could it work in his favour? And how, with the pub so damaged, will joint owners Chas (Lucy Pargeter) and Marlon Dingle hold onto their livelihoods?

Viewers will see the famous bar go up in flames this Christmas Day in an hour-long special of the Yorkshire based saga. But let’s look back at some facts about the Inn that was first seen in episode one of Emmerdale Farm back in 1972.

Fictionally The Woolpack has been in existence since 1776, and has been supplied by Ephraim Monk brewery.

1972 – When the show first started, Amos Brearly was the landlord and had been since 1948

1976 – A crack in the fireplace exposes subsidence in The Woolpack. The building is abandoned and moved to a new location (the current building/position in the village)

1993 – The Plane Crash causes damage to The Woolpack, including blowing all the windows out and the demolition of the tap room/wine bar – which crumbled on top of Chris Tate, leaving him paralysed for the rest of his life

1995 – Turner has the pub renovated – the Dingles steal a section of the old bar, which they still use as a bar within their home. They also steal the ‘wishing well’ structure that used to be in the centre of the pub – thus giving the name ‘Wishing Well Cottage’ to their house

1998 – The pub burns down. Terry and Alan’s granddaughter, Tricia, are looking after the pub for the night and hold a lock in. They go to bed, leaving a candle burning on the bar, which starts a fire. Fireworks stored behind the bar fuel the fire which guts the bar. Eric Pollard receives a minor injury as he’s passing the pub when a firework shoots out of the window

1999 – Bernice, previously drafted in as a temporary barmaid, later manager, buys the pub from Alan, with her fiance, Gavin. When Gavin turns out to be a love rat, Bernice’s mother Diane buys his share – beginning her 17 year stint as landlady

2003 – The New Year’s Eve Storm damages the pub – lightning strikes the chimney, which falls through the roof, and causes the window/masonry from the room below to crash down onto Tricia Dingle – who is ultimately killed by the crush

2010 – Diane looks to sell-up – Nicola & Jimmy King consider buying it and take over the pub for a trial run, but consider it too much work and decided against going through with the purchase

2019 – Lachlan seeks revenge on the Dingles, via his father, who starts a fire at the back of The Woolpack, stabs Vanessa and inadvertently kidnaps Johnny

2019 – The Beer Garden opens, with a children’s play area dedicated to Paddy and Chas’s baby, Grace

2021 – Al buys a share of the pub, with him, Marlon and Chas all having an equal third share 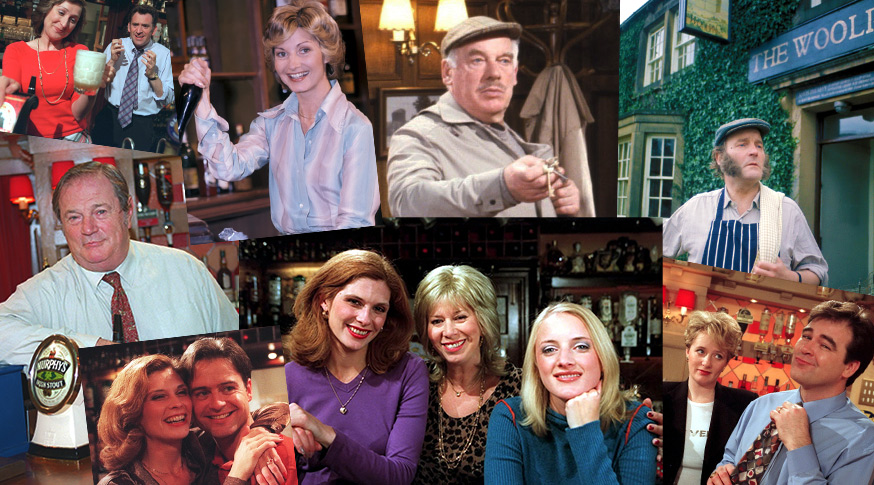 Despite its many years the pub has been only ever entrusted with two none-owner managers, these were Terry Woods and Britt Woods. There however has been many bar staff pulling pints how many do you remember?

When the show first began in 1972, the real-life pub, The Falcon Inn, in Arncliffe, was used for filming.

In 1976, village exteriors moved from Arncliffe to Esholt, and The Commercial Inn, in Esholt was used for filming – later officially changing its name to The Woolpack. The move was covered on-screen with a story of subsidence necessitating a move to a new location.

From 1998, when the village set at Harewood was completed, the pub exteriors have been the purpose-built set, which was modelled on Esholt.