From James Bond to Coronation Street, The New Avengers to Sapphire & Steel, Absolutely Fabulous and Jam and Jerusalem actress Joanna Lumley has appeared in them all – making her one of our British icons. 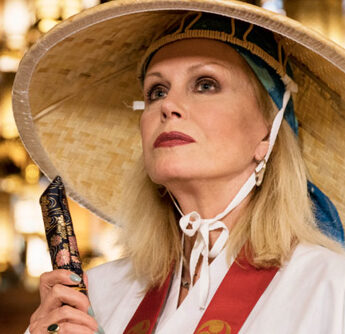 Michael Keohan looks back at the career of actress who has effortlessly moved between comedy, drama and Sci Fi.

One of Joanna Lumley’s earliest roles was in the 1969’s James Bond film, On Her Majesty’s Secret Service. The film was actor George Lazenby’s only appearance as James Bond in the film franchise.

Lazenby was due to appear in subsequent films but felt the character was out of place in the world of the 1970s and the films wouldn’t be so successful. In the movie Lumley has a medium role as “The English Girl”, one of the female patients Bond encounters at a special hospital high up in the Alps.

Amongst the other actress’ playing the patients is Catherine Von Schell in one of her earliest roles. The actress would later rise to fame appearing in shows such as Space 1999, Doctor Who and Wish Me Luck. Although Lumley’s role was limited in the film it was later knowingly referred to in Absolutely Fabulous, several times, when it’s stated that Patsy was a Bond Girl. Also in 1969 Lumley had an uncredited role in the film Some Girls Do. 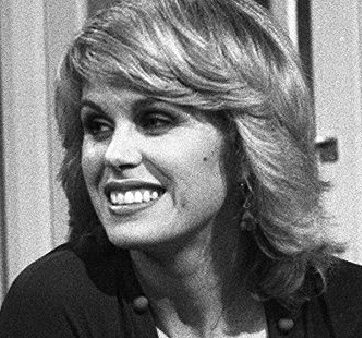 Her first big television role was in 1973 on the Granada-produced soap, Coronation Street. While Lumley had small roles on other shows before this, such as Steptoe and Son, her role in the soap was her first regular part. Lumley played Elaine Perkins in over 100 episodes of the Granada soap and was one of the many women to be romanced by Ken Barlow. Ken even proposed to Elaine but she turned him down – a wise choice.

Two of three of Ken’s ex-wives died in the saga. In the same year Lumley made her first guest appearance in the popular BBC comedy, Are You Being Served? Joanna appeared twice in the comedy, with another department store caper in 1975. At the time the actress was married to Jeremy Lloyd who was a writer for the show.

It was in 1976 that Joanna Lumley was cast in one of the roles she is most remembered for and the first show where she was a leading star. In 1976 ITV revived its barmy thriller series The Avengers with lead star Patrick McNee reprising his role of John Steed from the original series. Titled The New Avengers Joanna Lumley played Purdey with Gareth Hunt completing the new cast as Mike Gambit.

The reborn series was produced at the Pinewood studios and reportedly cost over one hundred thousand pounds an episode! The series ran for two seasons, 26 episodes in all, but never achieved the success of the original Avengers. 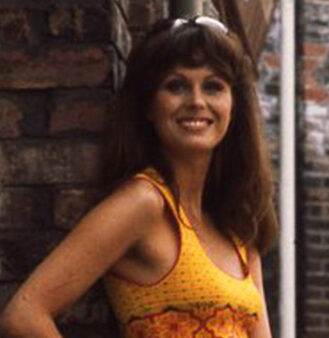 While the series was popular it didn’t generate enough ratings to justify its high production costs and so was canceled by ITV. When the show was released on VHS sales were stronger than expected leading to plans to once again revive the series in the form of a spin-off featuring Lumley and Hunt. Scripts for the spin-off were written and storylines drawn up but ultimately the spin-off never happened.

Shortly after The New Avengers finished in 1977 Lumley was cast in ATV Science Fiction series, Sapphire and Steel. Once again the actress was cast in a leading role playing the telepathic Sapphire who along with Steel [David McCaullum] investigates breaks in time. The series was shot at ATV’s Elstree Studios and was originally intended to be a children’s programme.

This can be more prominently seen in the first story of the series which features two young children whose parents are trapped by a break-in caused by a nursery rhyme. The set for the first story was actually re-dressed scenery from ATV’s period drama, The Cedar Tree – to keep costs down!

However, after the first story was produced it was decided to target a different audience and the production became darker in tone and aimed more on adults. The series’ second story, set in an abandoned railway station haunted by a World War I soldier, is the story most viewers remember.

Because of the limited availability of Joanna Lumley and her co-star, David McCallum, stories were produced at irregular intervals, whenever both actors were available, and due to this, it was also broadcast irregularly. However, it was very popular with audiences despite its infrequent appearances in the schedules.

In 1982 Sapphire and Steel was deemed to have ‘gone as far as it can’. The final story of the series saw the two investigators trapped in a petrol station seemingly forever. Series creator and writer PJ Hammond hadn’t intended to end the story with this and the next story would have seen the two characters rescued. Actors David McCallum and Joanna Lumley were both expecting to film more stories but the axe fell – shocking all involved. In recent times ITV has considered reviving the series and talks with PJ Hammond took place but fell through because of ITV’s wishes to radically revamp the format of the show.

Around the same time as appearing in Sapphire and Steel Joanna Lumley guest-starred in another ATV serial, General Hospital. The popular medical drama had originally started out as a daytime drama in 1972 and was produced at ATV Elstree studios. The promotion to prime-time saw the drama switch to a bigger budget, and Joanna’s guest appearance in General Hospital saw her play a patient.

The actress had also guest-starred, as a patient, in ATV’s predecessor medical drama to General Hospital, Emergency Ward 10. EW10 was a hugely popular drama that ran from 1957 to 1967 and was axed due to declining ratings following a failed revamp. Lew Grade, who ran ATV, realised he made a mistaking axing EW10 when his mother complained she missed the medical saga and so he revived it in the form of General Hospital.

In 1992 she was cast in one of the other roles Lumley is most famous for – Patsy Stone – in the Jennifer Saunders penned series Absolutely Fabulous. Patsy Stone was an alcoholic, drug-taking, chain smoking, serial adulterer who supposedly ran a fashion magazine but actually spent most of her time at best friend Eddie’s [Saunders] house consuming free booze [most bolly] and being spiteful to Eddie’s constantly disapproving daughter, Saffy [Julia Swallah]. Patsy remarks on numerous occasions she attempted to convince Eddie to have an abortion when she discovered she was pregnant with Saffy. Patsy and Saffy both despise each other and often make bitchy remarks about/to each other.

Lumley played Patsy Stone until the series conclusion in 1996 but reprised the role in 2001 when Saunders decided to revive the format. Originally Saunders intended to launch a new sitcom called Mirrorball which focused on several failed actors desperately seeking fame and their big break-through. 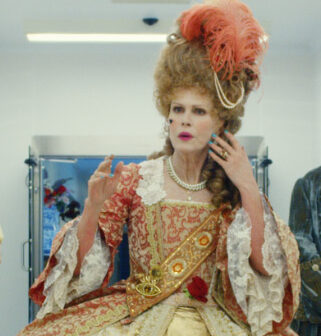 A pilot episode was filmed and transmitted but instead of following it up with a full series, Saunders decided to revive Absolutely Fabulous instead with all the cast reprising their roles. Playing Patsy’s Stone sister, in two episodes, was Kate O’Mara while Patsy’s mother, who appeared in several episodes in flashbacks, was played by Eleanor Bron.

The comedy once again wrapped up, seemingly for good this time, in 2005. The sitcom, however, was hugely popular both here and in America and such was the popularity that Joanna Lumley and Jennifer Saunders had cameo appearances, as their Ab Fab characters, in Roseanne. An American remake of the sitcom is currently in development although there have been several attempts over the years to remake the sitcom for American audiences.

The role of Patsy Stone brought Lumley to the attention of a whole new generation of television viewers and as such a whole sway of roles in other shows materialised. The actress appeared in the French and Saunders sketch show most notably in the duo’s spoof of Titanic. In 1996 she had a role in the James and the Giant Peace, a film based on the novel by best-selling children’s author Roald Dhal. Lumley also appeared in the monologue drama Up in Town in which she played divorcee Madison who realises her social star is fading. In 2004 she starred in the new ITV versions of Agatha Christie’s Miss Marple appearing in the adaptation of Body in the Library.

In 2005 Lumley appeared in the first series of BBC Two drama Sensitive Skin and returned in 2007 for the show’s second season. In between filming the two seasons, she was amongst the cast of another of Jennifer Saunders’ comedies, Jam and Jerusalem. In the off-beat BBC One comedy Lumley played Church Panio Player Deliah Stagg although the actress was virtually unrecognisable due to the make-up the part required. The comedy also starred Saunders herself as well as Dawn French, Maggie Steed, Sue Johnston, Pauline McLynn and Doreen Mantle.

Although the comedy wasn’t a huge ratings hit the BBC did commission a second series although Lumley only appeared in a couple of episodes. The door was, however, left open for future appearances and a third series of Jam and Jerusalem is currently in production. Lumley worked alongside Dawn French and Jennifer Saunders once more for the duo’s spoof of Mamma Mia in which Lumley played her part in the spoof as Patsy Stone. 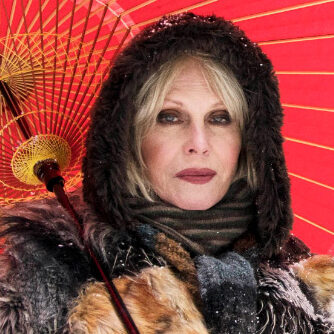 As well as being an actress Lumley is also a political activist for which she has gained a lot of media attention recently. Lumley is a high-profile supporter of the Ghurkha’s and their right to settle in the UK.

The actress has lead a campaign against the present Government for their refusal to allow the Ghurkha’s to settle in the country and she is widely supported by the media and the general public.

The Ghurkha’s aren’t the only issue that Lumley supports as she is also a keen supporter of the Free Tibet movement and also the movement against the dictatorial rule in Burm.

Michael Keohan is a radio presenter and writer.

Here with ATV Icons he celebrates the names past and present who have given a great deal to British Culture.

ATV Icons: The Reporters who led the way

Margaret Batey
Our partners use technologies, such as cookies, to personalise ads and content based on your interests, measure the performance of ads and content. Click agree to consent to the use of this technology. You can change your mind and change your consent choices at any time by deleting your cookies from your browser.