“[Corrie] has taken me, a working class mother of four, who sang a bit in the northern clubs to pay for a few extras for the kids, to meet the Queen, to hit some horrifying headlines, to be featured on This Is Your Life and to be welcomed into millions of people’s homes.” – Liz Dawn, quoted from  her autobiography ‘My Life’ (1993)

Tonight Liz Dawn makes her final appearance as loud-mouth Vera Duckworth in Granada Television’s ever-popular Coronation Street. To mark her departure from the street, ATV Today inducts the actress and singer into our hall of fame. 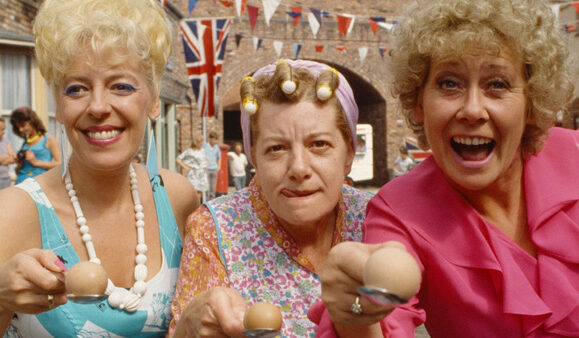 Elizabeth Dawn was born as Sylvia Butterfield on the 8th of November 1939 in Leeds. The Yorkshire girl however spent her early years not in show-business, but in a factory. Working from the age of 15 in the clothes-making industry she later switched over to retail where she worked on the light bulb counter of Woolworth.

Other early jobs included as a sales assistant in a shoe shop and in a cinema as an usherette.

The showbiz spotlight was turned onto Liz when she began working as a club singer, notably over in Scarborough and at a club next to the Butlins seaside holiday camp in Filey. It was during this time in the early 1960s she changed her name from Sylvia Butterfield to the name we all now know as the actress Liz Dawn.

Liz never hunted out major fame or acting work, it found her. As she noted in her autobiography, ‘My Life’.

“I never had a plan to become famous. I didn’t go off for secret acting lessons or plot desperately into the night… Nobody believes me when I say it, but it just happened.”

Aged 31 she was living in a council house bringing up four young children, married to an electrician with no idea what was around the corner in her showbiz career. Without any professional acting behind her she applied to do some ‘extra work’ which these days is called supporting artists, basically those people who rarely, if ever, speak in the background of scenes in soap and drama. 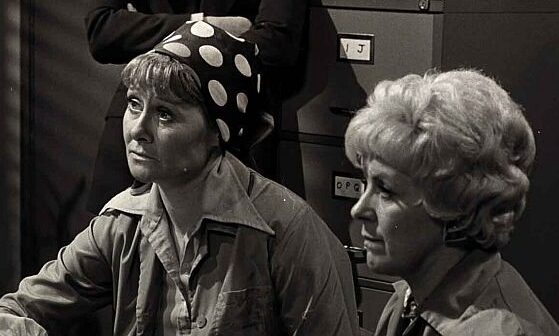 Having gained her equity card from doing bits of mute background acting Liz attempted to appear at the yearly Northern Command Performance at the Opera House in Blackpool, however the audition process at the Leeds Varieties Theatre left Liz frustrated.

A chance meeting with an agent saw Liz asked to audition in a Colin Welland play, this lead to working alongside Bill Maynard – best known these days as Claud Greengrass in YTV’s Heartbeat – in a drama Kisses at Fifty.

Before Kisses at Fifty had even aired, Liz now on the books of an acting agency, was spotted in their publicity by movie director Alan Parker, he cast Liz in two television commercials, the first was for Cadbury where she played a mother attempting to comfort her disheartened son.

“I had to say ‘come on Tim, I’m sure all goalies let in ten goals at some time in their career’. It seemed to strike a chord with people and quite a few offers came to me after that.” – Liz Dawn

This lead to small TV roles including working as a sketch show performer on Yorkshire Television’s Sez Les with Les Dawson and LWT’s The Larry Grayson Show. Other television work includes shows such as BBC police drama Z Cars, corner shop comedy Open All Hours, and BBC Two’s TV movie Daft as A Brush. Alongside Brian Glover, she starred in Speech Day, the second screenplay from Kes writer Barry Hines.

In 1972 Granada Television cast her in the first of a number of roles in their daytime courtroom saga Crown Court. Liz featured in twenty editions of the production in total. Made at the same studios as Coronation Street, she also became a regular on their entertainment series The Wheeltappers and Shunters Social Club and in 1974 appeared in their drama Hows Your Mother. In 1976 Liz was called in to audition for Corrie. 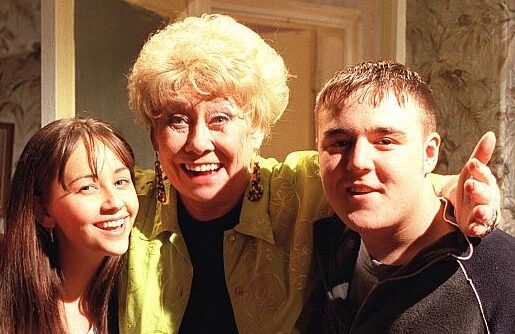 Liz was cast as factory worker Vera Duckworth, a worker at the Mark Brittain Warehouse. She would later, at Baldwin Casuals clothes factory, on the same site opposite the famous Corrie houses, spend most of her early screen time alongside Ivy Tilsley – the late Lynne Perrie – and Elsie Tanner played by soap icon Patricia Phoenix.

“When I walked into the Street studios for the first time I was already acting. I felt that from the first moment I had to show them I was capable, and you can’t act capable if you behave like a mouse. So I would grit my teeth, switch on my most confident smile and stride into action.” – Liz Dawn, My Life, 1993

Her initial on-screen double-act with Perrie made Vera and Ivy hugely popular with viewers, however, the arrival in 1979 of husband Jack – actor Bill Tarmy – created another legendary Corrie on-screen couple alongside the likes of Ken and Dierdre, Mike and Alma, Stan and Hilda and of course Annie and Jack.

Bill had been seen regularly in the background of the Rovers Return scenes prior to being promoted to the speaking character of Jack. Memorable moments between Jack and Vera would come much later however when the couple became residents of Coronation Street itself in 1983. Liz recalled over the years the back story to Vera had somewhat changed since her first appearances in 1974;

“Vera changed quite a bit in those early years. When I first appeared in 1974 she was a forceful factory girl demanding a better deal for the workers… In 1975 she came back and had somehow turned into a divorcee and was the girlfriend of barman Fred Gee. I even had a few lines about a daughter who has never been heard of or seen since.”

The Duckworths, complete with wayward son Terry – actor Nigel Pivaro – gave ITV viewers some of Corrie’s most amusing, and in equal measure heartbreaking scenes. From the insurance scam which saw Jack and Vera chucking buckets of water around the house, to Vera believing she was related to the royal family there were many moments of laughter. 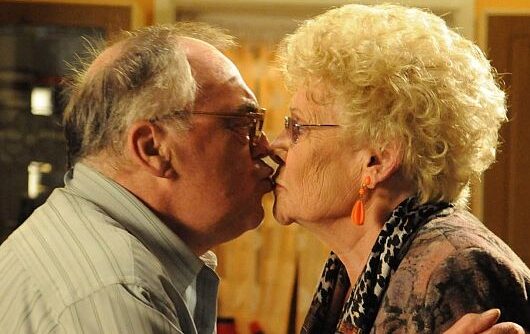 Tears came when son Terry sold their grandson for £10,000 to his other grandparents following the death of Tommy’s mother and there was more heartache when having inherited money, they were forced out of the Rovers Return after feuding with business partner Alec Gilroy. Jack and Vera were also ‘second parents’ to a number of regulars on the street including Curly Watts and more recently Tyrone Dobbs.

Memorable moments which many viewers remember include Vera taking part in the Weatherfield Olympics, Jack posing as ‘Vince’ to woo in women via a video dating site, he later donned a disguise again to help the factory girls out with their darts team when he dragged up to give them much needed support and Vera and Ivy continuing their partnership after the factory closed over at the Betterbuys supermarket alongside off-the-wall manager Reg Holdsworth.

The Jack and Vera story will come to a close, with the couple having recently celebrated 50 years of marriage, and plans to retire to Blackpool. It of course, as we all know, sadly won’t be that happy ending for the couple we see tonight as ITV Granada has confirmed that Vera will pass away in her last episode.

Michael Keohan is a radio presenter with Lite FM in the Cambs area.

ATV Icons celebrate the names past and present who have given a great deal to British Culture.