Born in Adelaide, Lois had aspirations to become a dancer but would forge a successful career as an actress instead. After an initial start in repertory theatre, she would find herself at the cutting edge of the satire movement of the 1960s. She was a founder of the Flinders Street Revue Company and this led to her being booked to appear on and write for the ground-breaking satirical sketch series The Mavis Bramston Show.

Lois enjoyed a distinguished stage career. She starred in the Australian and British premieres of Michael Gow’s play On Top of the World, and was cast in so many productions of Summer of the Seventeenth Doll that it almost became a full time career. In 1962 she adapted Norman Lindsay’s novel The Cousin from Fiji into a musical, the production had the blessing of his wife and received critical acclaim. 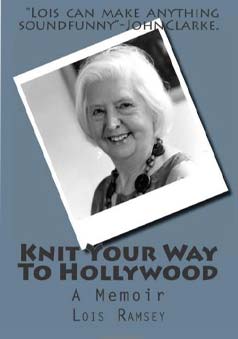 Her film credits included the movie Crackerjack, and on television she appeared in Young Ramsay, Home & Away, The Harp in the South, and Prisoner: Cell Block H. In The Young Doctors she played Winnie Parsons whose infamous scones caused mayhem at the Albert Memorial Hospital, and in 2000 she won the AFI Award for Best Performance by an Actress in a Guest Role in a Television Drama Series for her work on Grass Roots.

In 2012 she wrote her memoirs, a wonderful book called Knit Your Way to Hollywood which I would highly recommend. The book can still be purchased from Amazon and gives a true insight into a remarkable life and career.

Despite an extensive seventy year career, she will always be most associated with the role of Mrs Hopkins in The Box. Mrs H, a former hoofer, often reminisced about her days working at the old Tivoli Theatre, and was always on hand to dish out words of wisdom to the youngsters working at the fictitious Channel 12. The much loved tea lady certainly did not approve of the kinky goings-on at the television station and faced her own personal struggle when her son Wayne came out of the closet about his sexuality.

Lois was a lovely lady and was sprightly right up until the end. Late last year she was the guest of honour at a special screening of the feature film spin-off from The Box which was organised by Andrew Mercado.

If you’d like to revisit some of the great ladies work then she can be seen in a number of recent DVD releases including volumes 1-3 of The Box, volume 4 of The Sullivans, and volumes 6 and 7 of Homicide. These titles can be ordered in the UK from Eaton Films and in Australasia from Crawford DVD