To celebrate 40 years since the first episode of Only Fools and Horses, the BBC has released a collection of previously unseen images.

“These unique photographs show filming on location, set design and the cast and crew from the first episode to the last. It is brilliant to share these fantastic memories with the audience.  To the best of our knowledge, these images have not been released or viewed previously and have now been fully restored for the enjoyment of fans of the show and of photography. It is an honour to be the custodian of these images and to curate a collection that brings joy to the viewers.” – Luke O’Shea, Archive Collections Manager

The images include scenes at Butser Hill, near Petersfield in Hampshire, Studland Beach in Dorset and Margate in Kent.  Set in Peckham, in South East London, Only Fools and Horses was first broadcast on BBC One on 8th September 1981, with the episode ‘Big Brother’. The series was written by John Sullivan, who had already seen success with sketches for The Two Ronnies and his first major sitcom, Citizen Smith starring Robert Lindsay as “Wolfie” Smith.

Only Fools and Horses starred David Jason as Derek “Del Boy” Trotter and Nicholas Lyndhurst as his younger brother Rodney Trotter. The series received numerous awards, including recognition from BAFTA, the National Television Awards and the Royal Television Society, as well as individual accolades for both David and Nicholas. David at this point in 1981 was best known for his roles as Granville in BBC One’s Open All Hours and ATV’s sitcom A Sharp Intake Of Breath where he starred in the lead role of Peter Barnes. Nicholas had charmed viewers in BBC middle-class family sitcom Butterflies as the youngest son Adam. 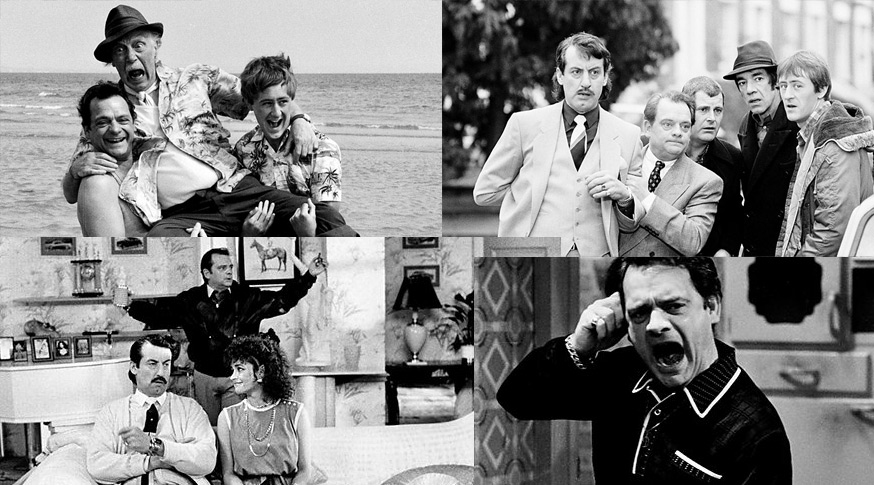 Del and Rodney lived in Nelson Mandella House, Peckham. The 12th floor council flat had been home to the family since the tower block opened as Sir Walter Raleigh House in 1960. Mother Joan, father Reg (Peter Woodthorpe) and Reg’s father Edward, known to all as Grandad, (Lennard Pearce) all lived in the flat. Joan died in 1964, and was never seen in the sitcom, however, was mentioned frequently, and her elaborate ‘fibreglass’ grave was seen several times. Reg ran away not long after his wife’s death leaving Del to raise his younger brother Rodney. The programme picked up the storyline 17 years after Joan’s death – and was revisited in the 2010 spin-off Rock n Chips when EastEnders actress Kellie Bright portrayed Joan Trotter.

Only Fools and Horses, while not an initial success, by the mid-1980s was one of BBC One’s most popular sitcoms. The programme ran for seven series and 16 Christmas specials until 2003, with the final episode of series 7 attracting a record audience for a British sitcom of 24.3m viewers that still stands today. Classic moments include Del falling through a wine bar hatch when he fails to realise the opening has been raised, the destruction of a vintage chandelier when Grandad loosens the wrong bolt, Del and Rodney, ready for a fancy dress party, becoming heroes dressed as Batman and Robin by thwarting an attempted robbery and in what many fans consider the ‘last episode’ ‘Time On Our Hands‘ (1996) seeing the boys become millionaires via an antique watch they’d had in their garage for decades.

“This cache of new photos reveals the genuine joyful camaraderie at the heart of one of the nation’s best loved sitcoms. Fans will love seeing the on set antics of the leading actors, as well as the paraphernalia of broadcasting on location of ever popular episodes.” – Robert Seatter, Head of BBC History