Lorraine and friends have climbed ‘the boob’.

Ahead of the first day of Breast Cancer Awareness Month tomorrow, ITV daytime show Lorraine has reignited its lifesaving Change + Check campaign. Host Lorraine Kelly, Coronation Street legend Sally Dynevor – who has beaten breast cancer, plus Lorraine Producer Helen Addis – the campaign’s founder and breast cancer survivor – and some of the inspiring women they have helped to save climbed Britain’s biggest boob – The O2.

The ladies were on a mission to put one of the Change + Check stickers – educating everyone about how to check yourself for the signs of breast cancer – on top of The O2. Speaking on today’s show, Lorraine exclaimed:

“What a fantastic way to launch our Change + Check campaign. It was incredible, it was such a great experience. The sun shone and it was a real celebration. It’s all about knowing your body. And it’s absolutely vital to have a bit of a sense of humour as well and obviously to be as positive as you can.”

During the climb, Sally said: “Change + Check is a wonderful campaign. It’s just brilliant to keep reminding people to check and I think the word is getting out there now. Early diagnosis is definitely key. If you check your boobs and find a lump – straight to the doctor’s.

“As women we rush around and we don’t really think about ourselves that much and think, ‘Oh, it’s probably nothing, I’ll leave it. I’ll just carry on with work but you really have to get it seen to, because you don’t know and you never think it’s going to happen to you.”

Sally’s daughter, Hattie, joined them on the climb and Sally added: “We need to teach it to young people, because young people don’t think it’s going to happen to them. Women from very young ages, from their 20’s can get breast cancer and so it’s really important to spread the message. Check your boobs girls!” 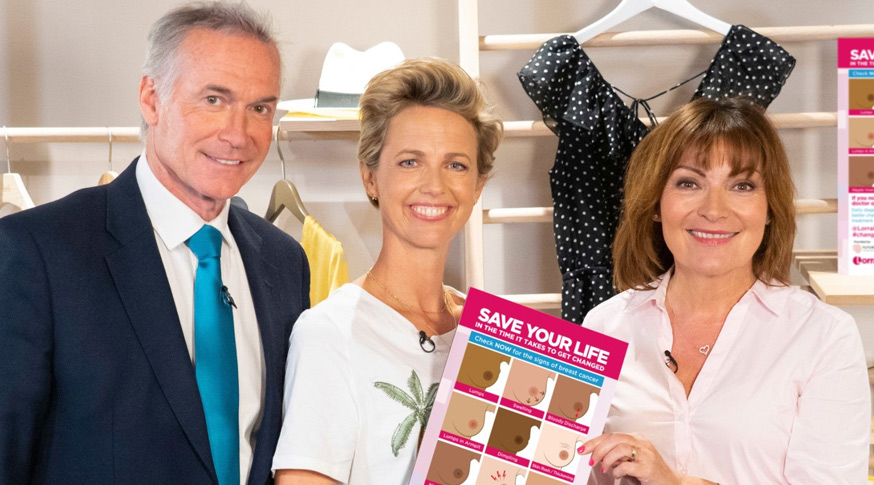 Lorraine agreed and shared how she has spoken to her daughter, Rosie, on the subject. Helen added: “The O2 is 52 metres high and we’ve had 52 women contact us – that’s amazing!”

ITV’s Lorraine show will be celebrating Breast Cancer Awareness Month throughout October with a wedding makeover for the very first woman the Change + Check campaign helped to save, plus a live on air breast screening with Dr Anisha on Wednesday 6th October and much more.

Having launched back in 2019, to date the campaign has saved 52 womens’ lives. They saw the work Lorraine was doing, went on to check their own breasts and thankfully got an early, treatable diagnosis.

The Change + Check campaign has gone from strength to strength since launching two years ago. Soon after launch, the initiative was commended by the then Prime Minister, Theresa May. And one of the most plauded elements was the stickers encouraging you to check yourself when in changing rooms, which were distributed in stores such as John Lewis and Partners, ASDA, Warehouse and David Lloyd Gyms to name a few. The Metropolitan Police also joined the campaign, placing 10,000 stickers in their sites across London. The initiative has too been endorsed by celebrities such as Emma Bunton, Kelly Osbourne, Naomi Campbell, Sheryl Crow and even Madonna!

In addition, Lorraine’s boob bus toured the UK, educating the nation about breast cancer – for both men and women, with Wayne Rooney partnering and urging men to check themselves too.

Lorraine, weekdays at 9 am on ITV.