ITV have revealed their exclusive first sneak peek of Emmerdale’s incredible custom made maize maze created and grown under the guidance of designer Duncan Howell and Head of Design Gillian Slight.

“It was a complicated design with lots of different journeys and dead ends but we also needed crew access because it’s a set and we needed escape routes also. I had a model made which I took on the recce with me. I’m really happy with the finished result.” – Designer Duncan Howell

The maze which was grown outside the Emmerdale Village in Leeds, took five months to grow. Two exact replicas were made with both covering a not insignificant 100 metres by 100 metres each.

The paths were then plotted with a GPS and had to be cut to absolute accuracy before the maize reached 10 inches. Then left to grow, the maize eventually reached a height of roughly three metres.

‘We wanted something that was unique to the Emmerdale landscape that also packed a dramatic punch. The idea of a maize maze really captured our imagination as we felt that it would provide the perfect backdrop for the high-octane drama to unfold. Duncan Howell and his team have done an amazing job of bringing the maze to life” – Producer Kate Brooks 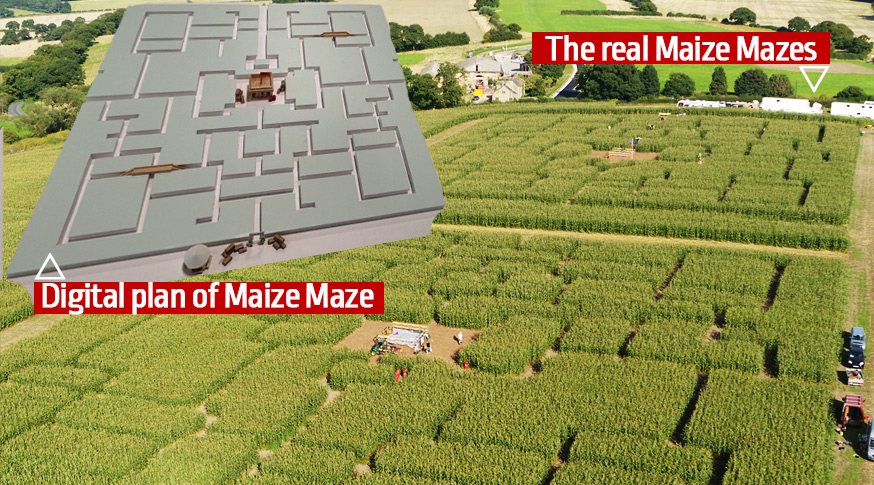 The maze forms the backdrop to the show’s anniversary celebrations later this month that revolve around malevolent Meena (Paige Sandhu), whose cold-blooded attempts to have everything her own way will cast a dark and foreboding shadow throughout the drama.

No one is safe… who will make it out the maize maze alive, and who will meet their grizzly end?

Meena first committed murder before her arrival in the village and in July this year she took her first life on screen. Lacking in empathy, dominated by her own ego, but otherwise normal to those around her, she is a manipulative character, hellbent on getting what she wants and woe betides anyone who stands in her way.

Over the summer her behaviour became increasingly erratic, leading to the demise of Leanna (Mimi Slinger), thrown to her death from a bridge.

Emmerdale, weeknights on ITV and the ITV Hub