The Hollyoaks star lost out in a dance-off with comedian Judi Love.

On Saturday, the Strictly professionals opened ‘Movie Week’ with a stunning and cinematic period drama inspired group routine. The remaining couples then took to the floor for a night of performances inspired by films.

The judges’ scores were added to the viewers’ votes to determine who would be tasked with impressing the judges one final time – this time it was Katie and Judi.

Judi and Graziano performed their Charleston to When You’re Good to Mama from Chicago. Then Katie and Gorka performed their American Smooth to Cruella De Vil from Cruella. After both couples had danced a second time, the judges delivered their verdicts:

Craig Revel Horwood chose to save Judi and Graziano on the basis that they had “shone brighter” in the dance off. Motsi also favoured Judi and Graziano’s performance as she felt it was the more “dance intensive” of the two.

Anton Du Beke chose to save Katie and Gorka as they were “cleaner than the other [couple]”. With two votes to one, it was then up Head Judge Shirley Ballas to decide who would stay in the competition. She decided to save Judi and Graziano as they had “more edge and more rhythm.” 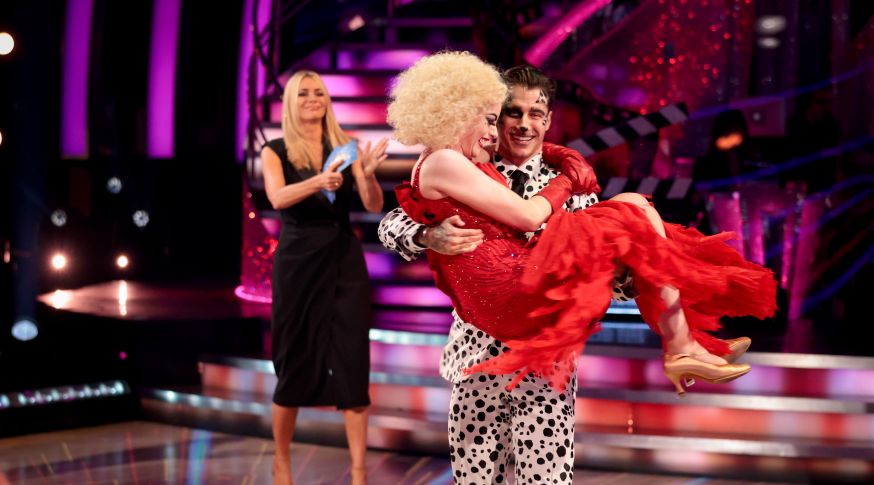 “I have absolutely loved my time, I am so happy I got to be Cruella, and dance with this amazing guy, I have loved every second of it.” – Katie McGlynn

Gorka added: “I think talking for myself, and all the pros, when we come to the show, it isn’t just about someone who can dance, it is someone who wants to learn, who wants to improve, and makes us love what we do, and makes our job enjoyable and easy. That’s what I had with Katie and I will never forget this experience, it’s been incredible.”

Tonight’s Result Show saw the Pros perform a routine inspired by 2021 smash hit film ‘In the Heights’. There was also a special music performance from star of stage and screen Ben Platt who performed ‘You Will Be Found’ from the movie Dear Evan Hansen.

The remaining thirteen couples will take to the dancefloor again on Saturday 16th October at 7pm.