Soap fans have been having their say on ITV’s celebration of TV pioneer and soap queen Noele Gordon, with the news the channel is to air a three-part drama on the Crossroads star next year.

ITV announced yesterday that they were to air ‘Nolly‘ the drama charting the rise and fall of Ms Gordon who died in 1985 aged 65. Since then social media has been buzzing with the news, and a majority of positive responses about the production that is to be written by BAFTA winning writer Russell T Davies and star BAFTA winning performer Helena Bonham Carter CBE.

In the sixties and seventies, Crossroads was one of ITV’s biggest daytime shows, a huge hit with audiences although never much praise came from television critics. Often knocked for its ‘low budget’ ATV boss Lord Lew Grade, who commissioned the programme, always said it achieved what he wanted it to and it managed -despite the flack – to pull in primetime ratings to its slot for most of its run, even beating primetime shows such as sketch show Morecambe and Wise (BBC One), twice-weekly saga Coronation Street (ITV/Granada) and drama Within These Walls (ITV/LWT).

It was gifted numerous awards as voted for by ITV viewers, who clearly felt defensive of the programme the broadsheet’s and their critics loved to hate – until Daily Telegraph readers also in 1974 voted it their most favourite programme too! In 1978 The Daily Mirror ran a poll and research to find out if Crossroads was loved or loathed and overwhelmingly the feedback was ‘loved’. Even William Roach from Coronation Street waded into the debate on Crossroads in 1985 noting he found the criticism of the show “unfair” and he felt “under the circumstances of producing so many episodes, I think they do extremely well”. From a man who knew how difficult it was to produce just two ‘as live’ episodes a week.

The saga made Noele Gordon one of ITV’s biggest stars in the 70s, with the East Ham born Nolly winning endless TV Times gongs, along with several other accolades from newspapers.

The television regulator – the IBA – wasn’t so sure however and called the programme ‘distressingly popular’ due to it dominating the TV Top Ten every week, sometimes taking all top four spots. When in 1979 ATV asked to put Crossroads back on five nights a week (it had been cut to four in 1967 to ‘improve the technical quality’ of the ‘as live’ programme) the regulator’s research found viewers would also like it on every weeknight again. Their answer to this was to cut it back to three episodes a week instead. “They’d rather be running BBC Two” ATV’s former Head of Programmes Charles Denton once said of that decision. 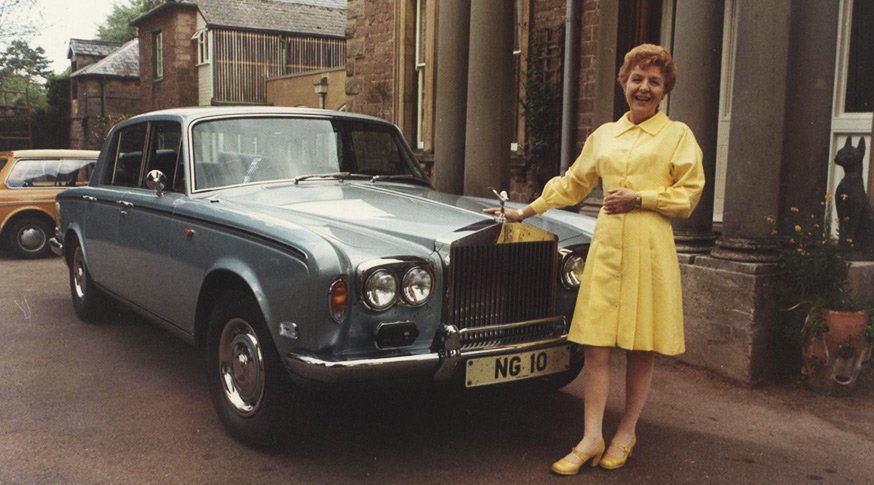 Word on the Web

Here’s what social media has been saying about Noele Gordon’s “comeback” to the mainstream after 30 years:

On how Crossroads pioneered daily half-hour serials in the UK, Sandra Ferguson on Facebook noted “She started the soaps. Everything stopped to watch the show xx”

While Mark Flewitt added “Wonderful news…Long deserved accolade to an undersold ITV star…” and Martin Clark noted, “Such a star in her day cannot wait for this ! Cannot replicate her stardom these days she was a one off !! Xxxxxxxxxxx”. Also on Facebook Chris Hulse observed, “I remember the protests outside ATV in Birmingham when she was sacked, Noele never got over that and I think it contributed to her early passing…” and Richard Hodgson recalled, “I remember her contribution to the Buy British campaign in 1975 – she replaced her metallic green Rolls Royce Silver Shadow with a gold metallic version of the same car – with a new wardrobe of clothes to match her new car!!”

On Twitter – The Crossroads Fan Club tweeted “People can say what they like about Nolly and Crossroads but in the 60s and 70s that programme pulled in peak ratings in daytime. It was unheard of outside of sport. All the more amazing considering it was never networked and shown on an ITV region by region basis.” While Marcus recalled, “My Great Aunt Vera went on a coach from Oswestry to ATV to protest when she was axed from Crossroads #MegIsMagic”. Lewis tweeted, “Still can’t believe a drama about Noele Gordon is going to be made. So so excited, darlings! Nolly has always been an icon for me.” And Jayne Carr said “I think Helen is a great choice. A very fine, well spoken actress, just like Nolly.”

While back at Facebook “How amazingly about time” said Malcolm Finnimore, Paul Walton recalled “Before Crossroads we had Lunchbox in the Midlands remember being late back to school watching it she did live TV so well”, David Bailey added “Hope it is true to the TV legend” and “Wonderful news. And written by Russell T Davies who is a brilliant Writer. Will so look forward to watching this x“ observed Gordon Cairns.

Ken Alexander noted “Delighted her story is being told. I hope the casting works.”, “Brilliant! She drove past my house most days from Handsworth Wood Rd on way to rehearsals.” said Julia Rose, Nick Palmer echoed many sentiments, “This should be good. Long overdue.” While Paul Faulder said, “Whatever the reason for the 7pm embargo it was worth the wait. As one of the biggest stars ITV have ever had this seems so obviously overdue now – but it isn’t something I thought about, especially after all this time, so fair play to them. An excellent production team will do her justice.”

And Tigg Gordon pondered, “She so deserves this, she was the biggest star they ever had, I hope they show Jack Barton for what he was. She should have been made a Dame.”

Posts to ITV News Central online include, Kirsten Reynolds noting “Noele was my more than just Crossroads she was a highly acclaimed actress well before. Helen Bonham Carter is a amazing actress to play her”, Eileen Osborne added, “As far as I can remember Crossroads was the very first soap, it was on st 6pm every weekday, I think everybody loved it…”, “Crossroads was my favourite show of all time to watch with Noele Gordon in it and loved all the characters who were in the programme, please bring it back on TV to watch again its a classic programme but I only the original programme.” said Bernie Kostiw and Anne Moghraby noted, “Looked forward to watching was different and a lot of characters stood out. Amy Turtle, Sandy in a wheelchair and favourite Benny Hawkins in his Woolley hat. A lot of areas familiar with. This drama will bring back memories.” While Angela Cunningham recalled, “Remember her on Lunch Box, and Crossroads, was only talking about her yesterday, lovely lady.”

Nolly will air on ITV next year.