Emmerdale star Rebecca Sarker has opened up about the most explosive Christmas ever in the Dales.

The performer, who plays Manpreet Sharma in the soap, spoke to host and Emmerdale superfan Andi Peters about her her ‘evil’ on-screen sister Meena – who has killed four people to date – and revealed what’s in store for her character over the festive season – and it’s very dramatic indeed.

Rebecca brought us up to speed on what Manpreet and the people in the village know. She explained on yesterday’s Lorraine show on ITV:

“Manpreet knows that her sister is a pathological liar, number one, she’s betrayed Manpreet so many times. There’s been that debacle with the texts and Charles, completely blew Charles and Manpreet’s relationship or chance for a relationship wide open. She knows that her sister is capable of lying, of betrayal, of being a nasty piece of work, but she doesn’t know she’s capable of murder and Manpreet would be absolutely horrified to even go there.”

On Meena’s ‘pregnancy’, she said:

“The seeds of suspicion and doubt are germinating in Manpreet’s mind. She knows that Meen can just literally lie in front of someone’s face – bare faced lies in front of someone because she’s done it with her sister so many times so she’s doubting – it’s terribly conventine that she’s pregnant now with her new love’s baby. It definitely spiked and sparked Manpreet’s suspicions even more.” 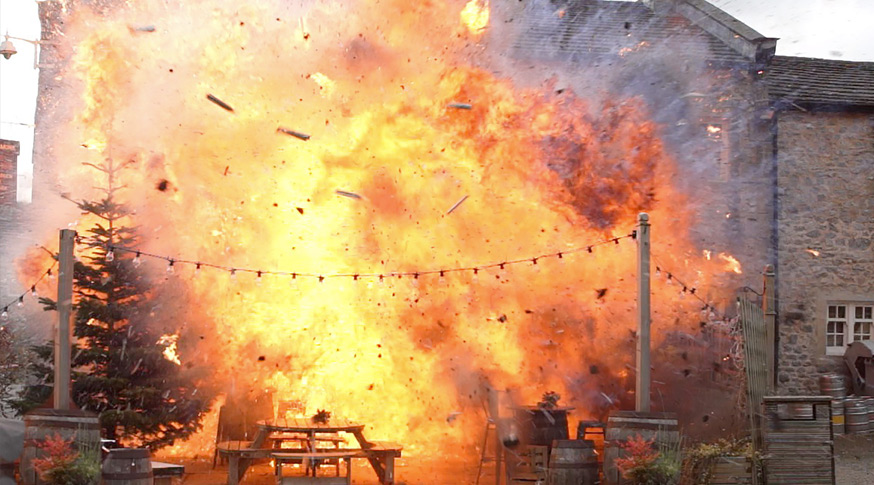 Andi asked, “Are you worried about Manpreet’s safety?” Rebecca explained,

An exclusive still from the show was shown, with Manpreet tied to a bed with Meena looking on.  “Is Manpreet alright?” asked a concerned Andi.

“No, she’s not, ” said Rebecca. “Meena, bless her, she makes Kathy Bates in Misery look like Florence Nightingale. It’s an absolute disaster for Manpreet. She’s taken hostage, she’s kidnapped, and she’s put in some very odd positions. My back is hurting actually now, having done quite a few weeks of being tied up…”

“She’s absolutely awful!” joked Rebecca. “She’s committed to the role. It’s been fantastic to play with her and play against her. We’ve explored that sisterly relationship, it’s a love/hate relationship there – I hope that comes across on screen. It’s been great fun. She’s meticulous with her prep and execution. We bounce off each other. I think I’m starting to take on some of Meena’s warped traits! It really ramps up.”

On her Emmerdale co-star Danny Miller’s I’m A Celeb victory, she said: “What a wonderful achievement. So proud of him.” To watch the show in full visit itv.com/hub

Lorraine airs weekdays at 9am on ITV and ITV Hub