Tingha and Tucker was a popular children’s series which hit the air quite by accident. When Australian producer and director Reg Watson was sent a present of some Koala toys to ATV they ended up appearing with continuity announcer Jean Morton to fill in some air time during a technical breakdown in 1960. Reg named the marsupials Tingha and Tucker and shortly after the pair became a fixture of the children’s schedules; at first appearing as the continuity stars with Jean at the end of Children’s Hour, before, in 1962, getting their own series.

Several puppets for each character were made for the TV series over its eight year run, with a reported scandal that the all the various versions of the puppets from the show were ‘stolen’ from the ATV studios in Birmingham not long after the series ended in 1970. We’ve done a little investigating, and after speaking with some former staff at the studios we’ve discovered the puppets, toys, sets and other props were actually in the main skipped – thankfully the lead puppets of Tingha and Tucker were saved by some employees at the studios – sadly currently we’ve only been able to track down one 1960s version Tucker, the rest remain lost to time.

Other regular characters in the series included Porky Possum, Ki Ki the Kangaroo, Willie Wombat, Katie Kookaburra and Ermintrude Emu. It was lead hosted by ‘Aunty Jean Morton’ with guest co-hosts including ATV continuity announcer Pat Astley. The series followed the adventures of the Koalas as well as stories and competitions. The series proved so popular a fan club was launched, with members getting their woomarang-boomerang and a club badge. There were also a series of puppets made for fans to buy, these however varied from the telly version – notably they didn’t have any feet! but it didn’t seem to matter to the fans, they bought up anything show related in their droves with best-selling annuals and hit records all in their collections.

At its peak the fan club had three quarters of a million members and in the end the post office couldn’t cope with the amount of mail being sent to the ATV studios, and so the club was closed to new members.

The series was axed by Lew Grade when he decided he had ‘too many bears’ in the children’s slot, as Rupert the Bear had been a popular recent addition to the ITV schedules. Sadly the majority of the episodes were wiped by ATV shortly after ITV transmission, however the recent discovery of a cache of film material has allowed three more editions to be reconstructed especially for DVD release.

We’ll start with Disc One, which has a choice of two menu options, ‘Select an Episode’ and ‘Special Features’. With the episode choice pushed we’re given a list of adventures with the Koalas and Aunty Jean and Uncle Pat.

The first programme is ‘Tingha and Tucker Visit Naples and Rome‘. This 31-minute special sees the furry friends venture abroad to Italy. From the airport to meeting local – very enthusiastic children – the show also takes in the history and locations, and all the characters of the show take a ride with Aunty Jean in a horse drawn carriage. Its a charming episode, and shows just why Jean Morton was so popular with her young viewers. In the wrong hands the factual side of the show could have been very dull and boring, Jean, along with the puppets, makes it far from dull.

Next up from ATV Midlands ‘Tingha and Tucker take a trip to Switzerland.’ Another special sees our favourite Australian marsupials head to the airport for another adventure. We see Aunty Jean rushing for her flight along with the mischievous Willie Wombat. Unlike the first special in this programme we spend time on the plane with Tingha and Tucker enjoying the in-flight meal. Soon however we’re not quite on the alps as the gang rather spend time in taking in the great views from St Gallen and then take in the town. More history and facts are mixed with local traditions of the market, where Ermintrude Emu fancies buying some jewellery. The show clearly an international hit, the koalas meet more of their young viewers from Switzerland. A quick trip over to the Village of Peace sees the show enjoy the sounds of the International Choir.

The third programme is one of only two studio based programmes to survive in the archives. This 16 minute edition of The Tingha and Tucker Club dates from October 1968. The episode however deviates from the usual format and is a full story-edition which sees Tingha and Tucker, along with their friends and Aunty Jean, tell the story of Goldilocks and the three bears.

The final full-length episode is from May 1970 and the only show to survive in colour. This edition is more in keeping with the usual format of the programme and is the only remaining example of the regular Tingha and Tucker Club shows. We begin with Willie Wombat playing his recorder, and Aunty Jean takes us through the days club members’ birthdays. We take a visit to Kiki Kangaroo’s post office and then the days story, ‘Willie the Pied Piper of Hamlin‘. The story ends with Tingha and Tucker, and the gang, singing ‘High Hopes’.

We now move onto the ‘Special Features’ menu.

The first option is a ‘promotional film’ from the early 1960s announcing that Tingha and Tucker will be on ATV Midlands every weekday at 4.45pm. The visual clips used to promote the show see the puppets and Aunty Jean at an open day for the club members, with 1000s of fans in attendance. Showcasing even in these early days the popularity of the programme.

The next feature sees Tingha and Tucker take a holiday to Blackpool. This will be nostalgic for anyone who recalls Blackpool’s glory days as a must-visit holiday resort, before the stags, hens and boozers took over. One of the founding members of the Tingha and Tucker Club, Sir Cliff Richard, is also in attendance and he gives the koalas a special performance at the end of the feature at the now sadly demolished ABC Theatre and Cinema.

Item three comes in the form of a look back at the show in 1996 as Central Television celebrated forty years of ITV broadcasting to the Midlands. Introduced by Bob Holness, Jean Morton talks about those halcyon days with her furry friends. It is followed by an image gallery, and if you put the disc into a computer it also brings up a further selection of extras including PDF material including the 1959, 1960 and 1963 ATV annuals. The first features Jean Morton, the second shows Tingha and Tucker as part of the Children’s Hour continuity and finally with their own show. There is also a full Tingha and Tucker Annual and a Tingha and Tucker Bedtime Book.

Disc Two brings us highlights from surviving film insert material including several Zoo Club sequences, a young Nigel Mansell, Ilkeston Donkey Derby, baby leopards and much more. Unfortunately the studio sequences for these items have long since been wiped, so Network DVD have reconstructed the film reports into ‘new’ feature-length ‘best-of’ episodes.

‘Compilation One’ starts with Uncle Pat visiting a bowling alley with the gang, then Aunty Jean pops to the hairdressers, where our furry television stars get into all kinds of trouble. Next Tingha and Tucker take a look at the world of miniature people with a peek inside some Dolls Houses. The following feature takes us to the T&TC aviary, where budgies are being looked after by the marsupials. We’re back with Uncle Pat for a visit to the fire station. Aunty Jean is at Bingley Hall for a club event where the members get to meet their heroes. Finally its an edition of Zoo Club.

‘Compilation Two’ sees us back in the hair salon with Aunty Jean as they prepare for a big show in the evening. Famous hairdresser Raymond Bessone, who also guest-starred in other ATV series Crossroads, makes an appearance. Next we’re off to air traffic control with Uncle Pat and the air theme continues as Aunty Jean meets a man who has made a miniature helicopter for Ermintrude Emu. Tingha and Tucker visit an infant school and play with the children while later Aunty Jean takes them to a shoe shop. Finally another edition of Zoo Club with a look at a mongoose.

‘Compilation Three’ begins with Uncle Pat at the RSPCA animal kennels in Birmingham. The animal theme continues in the next item as Aunty Jean goes to the ‘Tingha and Tucker Pet Shop’. The next feature sees the gang at the local car wash, its followed by a summer fete at St Peters Church. Uncle Pat takes the koalas to the milk bottling factory next as they see how milk gets from the factory to the shop. The compilation once more ends with Jean and Pat with another edition of Zoo Club, this time its a look at birds.

‘Compilation Four’ starts with Uncle Pat at a zoo with Tingha and Tucker as they look for a ‘strange animal’ while Aunty Jean holds a club meeting. Elsewhere the koalas have taken to racing a model speedboat on a lake. In the next feature Pat visits a pottery, then its off to meet some puppies. The next film insert takes us to Weston Park, including a look at the animals at the site.

‘Compilation Five’ starts with the 5th AGM of the Tingha and Tucker Club in 1967 at Trentham Gardens. The feature sees the regulars take a trip on the parks’ train and boat as well as a ride in the funfair and a race around the go-kart track. Next up is a story narrated by Aunty Jean with live-action mice shown in miniature sets depicting the plot. This is followed by another edition of Zoo Time with Uncle Pat then Aunty Jean is off to the Fairytale Garden.

‘Compilation Six’ begins with a Zoo Time and a six week old monkey is the guest of honour. The next feature sees the regulars at Calthorpe Park then its a few minutes with Pat and Katie Kookaburra at a petrol station. Then its a donkey derby with Jean while Pat takes the gang to an indoor ski slope. Its followed by another Zoo Club with a look at snakes.

‘Compilation Seven’ is the final feature on the disc and begins with another Zoo Club and we meet two six week old leopard cubs. The animal feature continues with a Tingha and Tucker Newsreel which sees them meeting some dalmatians. Its a return visit to Weston Park and a feature at the Pets Corner. Then its off to Episton Kennels near Nottingham, followed by a trip to a farm followed by another big gathering of the T&T club.

This release is definitely for those millions who watched the series every weekday over those eight years in the 60s who fancy a trip down memory lane. It is most certainly a nostalgia item as sadly due to the majority of the material being monochrome its unlikely today’s children will sit down to watch it; however for those who recall Tingha and Tucker fondly it is of course a must-buy. 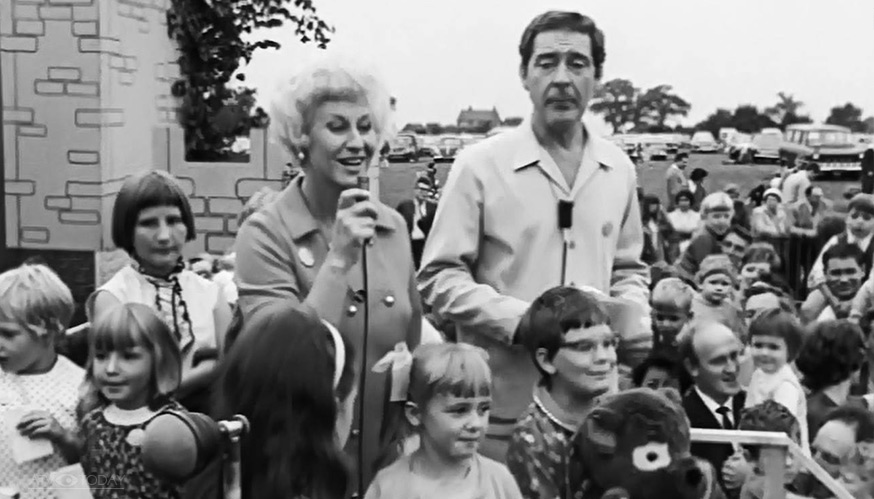 Tingha and Tucker is now on general release with a RRP of £19.99. Rating U.

One Reply to “Tingha and Tucker – DVD Review”