ITV Studios note that, due to the current situation, there has never been a cast image quite like it before.

The shot had to be taken adhering to the Government’s health and safety guidelines for TV and film production and the covid protocols and measures introduced by the programme which meant all of the actors in the portrait were photographed at different times.

First photo: The original Corrie cast at the Granada Studios garden in Manchester

Corrie went into Colour in 1969

Previous photography to celebrate the show’s big milestones has featured all the cast, starting with the famous black and white shot to launch the first episode.

With the pandemic meaning that large gatherings are not possible a decision was taken to represent the show by photographing the first seven of the current cast to join the soap alongside the most recent seven actors to have appeared on screen as a regular cast member.

Over a period of two weeks, the actors were photographed individually in a covid secure studio and then cleverly photoshopped to give the impression of being together.

Finally, with a nod to the show’s history, Hilda Ogden’s iconic ducks from her ‘muriel’ were added to the image, complete with wonky middle one!

Coronation Street broadcast live for the first time on December 9th 1960 from the Quay Street studios of Granada Television in Manchester. The brainchild of writer Tony Warren the series brought working-class characters, with everyday accents, to the front of storylines for the first time in British serial.

The cast celebrates after the live episode for the 40th anniversary

The Corrie regulars a decade ago, marking 50 years of the show at the Granada studios. 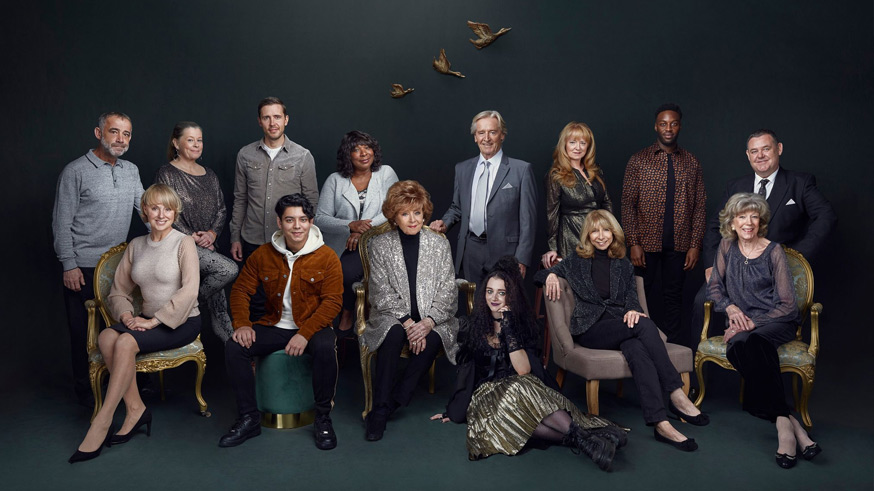 Classic serials launch on BritBox with boost to SoapBox content