“I don’t get up in the morning and talk about my disability all day, I live a life, whether it’s good, bad, sad or happy.”

This week Hollyoaks:IRL launched its 4th episode in the series with actress Rhiannon Clements – who plays Summer Ranger in the Channel 4 serial – meeting up with model and disability activist Monique Dior Jarett.

The programme sees the pair in conversation, as they explore issues surrounding positive representation of disability in TV, film and the arts.

In the penultimate episode of the series, Monique and Rhiannon discuss the obstacles faced by the less-able bodied community, and how vital it is that the media creates inclusive spaces so that all of us can see our own lived experience represented on screen. Reflecting on the barriers they have both personally faced while forging careers in the arts, the woman discuss Hollyoaks and the active role the show is playing in helping to shape the conversation around representation, while showing an honest depiction of what that might look like to the viewer.

In the documentary, Monique tells viewers “No matter how many times people told me I couldn’t do something, I just did it anyway.”

A leading voice in issues of disability and representation, Monique first came to the attention of Hollyoaks during a panel discussion. Through her activism, she works to provide a platform for less able-bodied people to become involved in the arts. 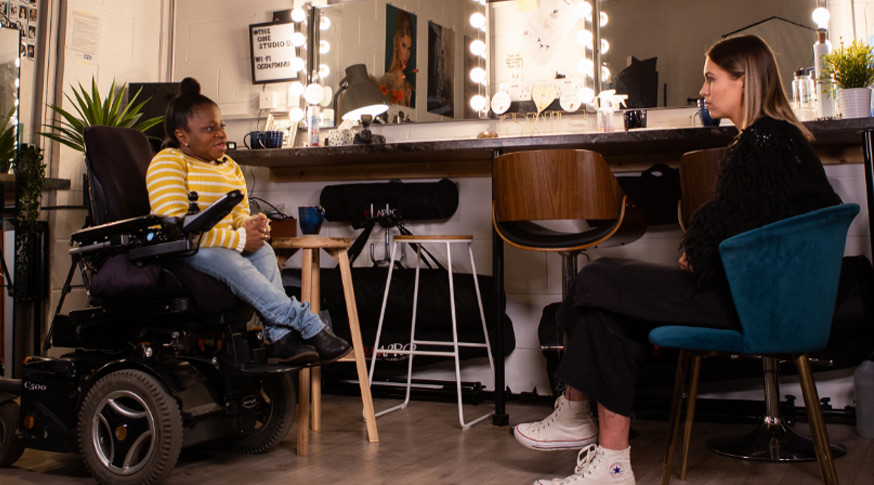 She continues to break down barriers, and last year made history by being one of five disabled personalities to appear on the cover of Grazia.
Describing the importance of on-screen representation, Monique said “It’s a way of showing people that even if I have a disability or a difference, I can do that job just as well.”
Rhiannon joined Hollyoaks last year in the role of the villainous Summer Ranger, who arrives in the village to exact revenge for her father’s death. She opens up on the lack of positive on-screen representation when she was growing up, and how this impacted her idea of what was possible for someone like her.

The character of Summer was written without a disability in mind, something Rhiannon explains as crucial in showing an honest depiction of her own, and many others lived experience. Rather than default to the well-worn trope of a less able-bodied person being at a disadvantage, with Summer, Hollyoaks have strived to redress the balance by allowing the character’s strength, independence and vengefulness take centre stage, and not her disability.

Each episode will premiere with a sneak preview on Snapchat Discover on Tuesdays, followed by full episodes available across Channel 4 socials each Wednesday.

Classic serials launch on BritBox with boost to SoapBox content