Harry Visinoni returns to ITV screens next week when Nina starts to remember exactly what happened on the night that she and Seb were attacked.

Monday night’s double bill of Corrie on August 30th features flashback scenes that take Nina and the viewer back to that fateful night in May when Seb was brutally murdered. For the first time the audience will find out who really was responsible for the cowardly senseless crime.

Harry talks about returning to the cobbles after Seb’s death to film the flashback scenes and explains how different it was being able to finally work closely with his co-stars on these important scenes, forming a close cohort bubble so they could film the fight scenes and even a kiss between Nina and Seb.

Were the flashbacks filmed before you left?
No, I came back specially to film the scenes a couple of months after my final day on set. I had to make sure I didn’t look too different. I had wanted to have a really different hair cut when I left but I had to keep Seb’s long hair. I was back for over a week to film the scenes. I always knew that I would be coming back to film but I didn’t know exactly what the flashback scenes were going to show, there was a lot more detail in the scenes and more filming than I expected but I’m really pleased with what we have done.

What was it like coming back and seeing everyone?
It was brilliant to come back and see everyone. We did lots of night shoots so it was very different to usual filming. It felt special and more like doing a self-contained drama or a film. The atmosphere was different and we worked as a close chort to be able to show the attack and the build up to it. It made it a lot easier, the first time was shot very cleverly and it was left to the public’s imagination, not seeing it didn’t hamper the story telling but for the flashback it was important to show what actually happened. It was necessary for us to be able to work closely. It will be interesting to see what is shown in the final edit as the viewer needs to see exactly what happened.

Why are those scenes so important?
The viewer thinks they know what happened and who they believe but the audience needs to see exactly what happened to know if justice is done in the courtroom, that is what gives it the drama. Thanks to these scenes the audience has the advantage of knowing the complete truth and knowing exactly who needs to be brought to justice. 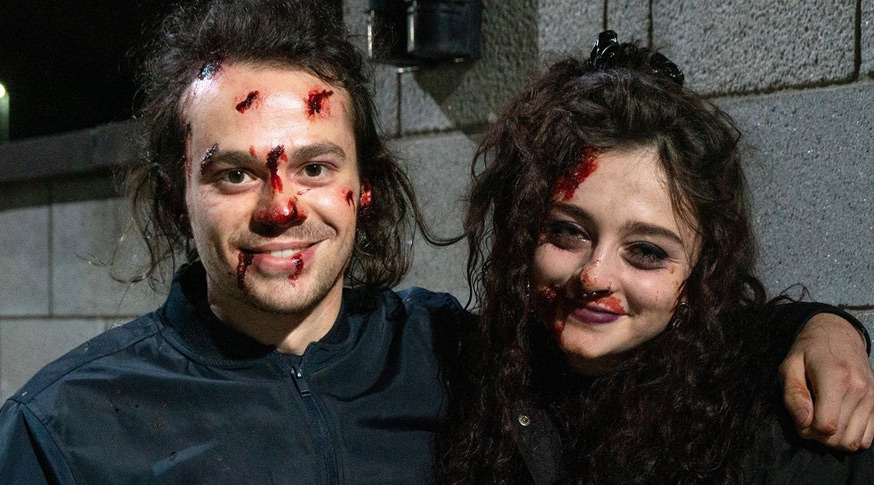 What was it like coming back recreating the relationship between Nina and Seb?
It was easy to get back into that and helped by the fact that we could actually work more closely. The whole relationship had been filmed in the past two metres apart and suddenly we were able to be really close to each other. There is a moment in the reconstruction where we actually got to kiss and that really helps tell the story of that night and remind people of the beauty of their relationship and ensure the viewers are invested in the outcome of the trial.

Did you watch your final scenes?
Yes, I watched Seb’s death with my mum and my girlfriend and they found it really upsetting to watch. It didn’t affect me, I was just remembering filming the scenes but it must have been hard for my mum watching her son in that situation. I was more affected by watching the other scenes with Nina, Roy and Abi, they were all so brilliant and I was so proud to have been a part of that story with those fantastic actors.

Have you watched since you left?
I did watch the aftermath and I thought Mollie and Sally were exceptional, I am looking forward to watching the build-up to the trial, I don’t know the outcome so I will be rooting for justice for Seb and Nina and I am looking forward to watching the flashback scenes as it is quite unusual for Corrie to do something like that.