Coronation Street viewers will tonight (Monday 30th August) get to find out the truth of exactly what happened on the fateful night of the hate crime attack that left Seb Franklin dead and Nina Lucas fighting for her life.

Nina has never been able to remember what happened, but now with the court case just days away, her memory starts to return and in two dramatic and moving flashback episodes she relives the full horror of Seb’s murder. Will her memory and testimony be enough to see justice done?

Here Mollie Gallagher talks about filming the flashback episodes, working in a close bubble and how she will never be able to wear Nina’s perfume again.

How does Nina feel about the upcoming trial?
She is feeling very nervous because she knows she can’t remember what happened and she is putting a lot of pressure on herself. A song comes on in the cafe when she is sleeping and she remembers that it is the same song that was playing in the van Seb was driving, the day of the attack. It triggers her memory and although it’s emotional it makes her feel encouraged that she can remember more if she tries.

You have said that you feel very attached to Nina, are you proud of her during these flashback scenes?
Yes, definitely. During the flashback scenes I tried to play it as her having a lot of strength but she is also very vulnerable as well so I tried to find that balance. I think she is a great role model because she always wants to do what is right and she is very strong-minded. I’m so grateful to have been given the opportunity to play a character like Nina.

What was it like to film the flashback scenes?
It was very hard because it was a reminder of the connection to the Sophie Lancaster story. I am only an actor playing a role but this has happened to people in real life and that is heartbreaking. It was cold and wet, lying on the floor, and we had to get back into the mindset that we had a few months ago and that was difficult but I am so grateful to be doing this storyline on an issue which is so important to highlight. 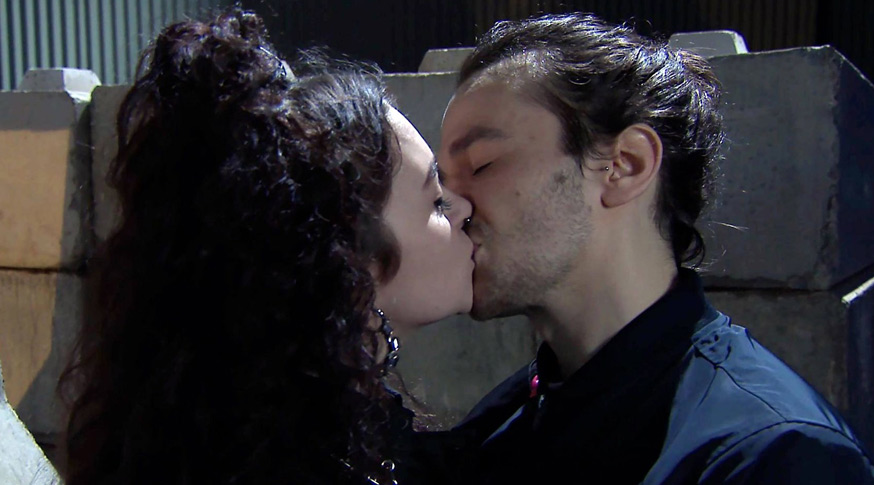 Why was Nina and Seb’s kiss scene important to show and what was that like to film?
It is important to show their relationship to remind viewers of how in love they were, I do think that that was it for them and they would have been together forever. Harry and I had never been that physically close before, even when we were doing the relationship scenes we had always filmed two metres apart. Filming the kiss was strange because it was the first time that we had been that close to each other! Prior to filming that scene, we had been put in a safety ‘bubble’ and we both took a Covid test beforehand.

The flashback scenes show the contrast between how Nina used to look and how she looks now, remind us why Nina stripped back her look after the hate crime?
Nina feels like the reason why Seb was murdered was how she looks and if it wasn’t for that then he would still be alive. When Seb died, she just felt empty, like she had lost everything, including herself. I remember the first time I saw myself on a screen as Nina, stripped back, and I thought I looked so different, so young! I thought it was really sad to see a character like Nina, who was so distinctive, change her specific ways and become more introverted but I love the layers of the character and the depth Nina has.

Nina wears her full goth attire to the court, how important was this for her to do?
Very important, it’s not just a look for her, it’s who she is. She has a conversation with Roy and she decides she wants to show Corey that she’s not scared of him and she won’t change herself for anyone. She does like who she is and that overrides what anybody else thinks of her because she is so content with who she is.

What was it like getting back into Nina’s original costume after so long? How did that feel?
Very strange because I had not worn that costume in so long! It changes how I move as the character of Nina, for example Nina always wears big platform shoes but when she was dressed down she was wearing converse so I was even walking differently as her. I also have certain perfumes for Nina and I had bought a specific one, Poison by Dior, for her relationship scenes with Seb. When Seb died I had stopped wearing it as Nina but for the flashback scenes I wore it again and just like Nina’s memory was triggered with the song, my memory was triggered with the perfume. Now these scenes are over I will never wear that perfume again.

What is going through her head when she takes the stand?
She is very nervous because she wants to do right by Seb. When they are asking her loads of questions she gets confused but all she wants is justice for Seb and closure. Her biggest fear is that justice won’t be done.