The four-part thriller for ITV from acclaimed screenwriter Sophie Petzal.

“I wanted to make a show that wasn’t a world away from Blood, but felt bigger and more ambitious tonally. Also, I had always wanted to write about sisters – I have a sister and that relationship is
probably one of the most important in my life. So I started thinking about the idea of a secret kept between sisters who live very close to each other, and then they suspect their children might have been responsible for another child’s death.

“Then they make decisions that have unfolding consequences and nothing is quite as it seems. I started developing that story with my producer, Jonathan Fisher and we would go on endless walks coming up with ideas for how the show could twist and turn. We both had a good instinct about it. I should say that me and my sister have a very different relationship to Helen and Theresa! But, of course, you take things fromyour own experiences all the time, things like childhood dynamics that live on into adulthood. I’m obsessed with family dynamics.” – writer Sophie Petzal

The sisters appear close and their families enjoy spending time together. We open on a warm, balmy evening, barbecue sizzling on the patio, the perfect family setting. The atmosphere is chilled, as they lounge in Theresa and Fraser’s perfectly manicured garden.

Apart from Fraser’s brother Eddie (Ken Nwosu) winding everyone up, there’s hardly a hint of tension, but this is the calm before the storm. When Theresa’s ten-year-old son, Ben (Fraser Holmes) asks to play in the nearby park with his cousin Eva (Amelie Bea Smith), the adults begin to niggle. Fraser is relaxed and is fine for them to go, but this doesn’t help Theresa’s fears of foreboding and growing feelings of anxiety.

As expected the children don’t return on time, and Theresa goes in search. Her suspicions are heightened when she finds the children on the edge of a woodland area and they appear to be fighting. Immediately her instincts tell her something terrible has happened.

Theresa’s partner Fraser will be played by Rhashan Stone and Helen’s partner, David, by Peter McDonald. 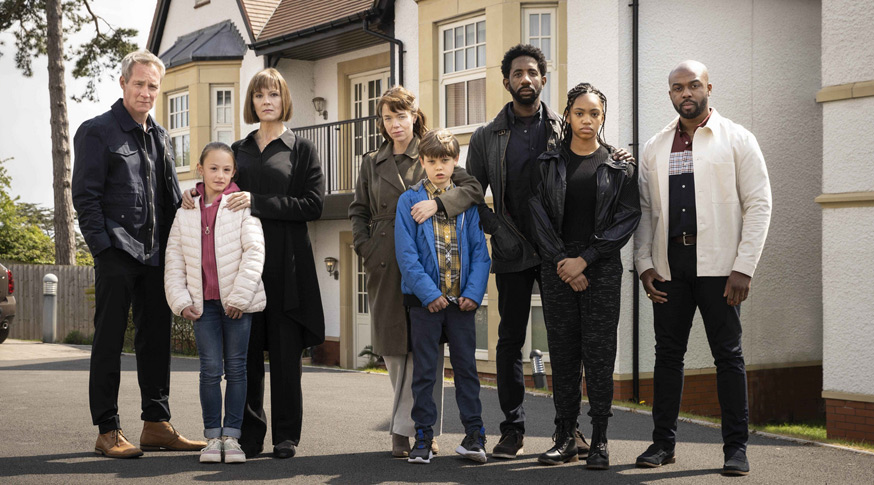 “I wanted to be part of the project before I had even read the scripts, because I knew of (writer) Sophie Petzal and her work. I watched a series she wrote called Blood, which I thought was absolutely brilliant. I hadn’t really seen anything like it on TV before. It was really odd, the characters were quite heightened, but it was just exceptional. So, I got in touch with Sophie and her producer, Jonathan Fisher, and asked to work with them. Luckily, they said yes!

“Then I read Hollington Drive and it was great. I was really gripped, I raced through the scripts. Sophie’s really good at not sitting on her laurels, she keeps the narrative going all the time, which is what I really liked about it. She keeps the momentum up, it’s great storytelling. I love thrillers, I hope the audience has a nice night in on the sofa watching it.” – Anna Maxwell Martin

In the first episode on a Summer evening in the seemingly idyllic suburb of Hollington Drive, 10-year-old Alex Boyd is declared missing. Sisters and social pillars within the community, Theresa and Helen, struggle to hold their lives and their families together in the wake of this tragedy. Secrets and lies begin to surface and long held facades falter as grief rips through Hollington Drive.

Theresa (Anna Maxwell Martin) is concerned about her own son Ben’s increasingly unusual behaviour and darkening mood, and fears that a past traumatic event is finally catching up with them. Her partner, Fraser (Rhashan Stone), tries to assuage her concerns, but as each new detail in the police investigation is announced, Theresa withdraws further still, terrified that Ben may have done something unthinkable.

Next door, school headmistress Helen (Rachael Stirling) is forced to confront the deepening faults within her own household: a listless, disengaged husband (Peter McDonald); a young daughter reeling from shock; and a school full of students and staff, all traumatised by the horror of Alex’s suspicious disappearance. The residents of Hollington Drive are compelled to assist in the search for the missing child, but Theresa fears the worst. Is it possible that her own son was somehow involved in whatever happened to Alex?

“Obviously, Anna and I have worked together before on The Bletchley Circle. But what I really loved about the script was the chance to play out this fascinating relationship between co-dependent sisters. Apart from in long-running soaps we just don’t really see sisters on telly or really examine their relationships. I’ve never had a sister so I’m fascinated in that dynamic.

“Theresa isn’t entirely confident in her own skin, and very much depends upon Helen, who is very organised and controlled. Theresa looks up to her, and then this appalling thing happens, a child goes missing and Theresa is absolutely convinced that her son has something to do with it. The show is about these two sisters coming together to protect their children, and in the end it’s about the fact that there’s no length to which a mother won’t go to defend her child. It’s interesting because both sisters have only got one child, so they have a very intense relationship with each other but also intense relationships with their children. It’s an interesting family portrait.” – Rachael Stirling

Hollington Drive is on ITV, Wednesday 29th September at 9pm.