Research suggests that out of the top 10 favourite participants, 7 are resident Strictly Come Dancing professionals.

As Strictly Come Dancing returned to screens at the weekend, new research has revealed that the show’s professional dancers are bigger stars than their celebrity partners.

The study commissioned by Cosmetify found that seven of the ten most popular people set to feature in Strictly 2021 are professional dancers, compared to just three celebrities, with dancer Oti Mabuse topping the list as the most popular.

“Whilst a new line up of celebrities is always an exciting part of Strictly Come Dancing returning to screens, it is thrilling to discover that the professionals are getting the support and interest they deserve. It will be interesting to see if the voting mirrors the social media popularity shown here.”  – spokesperson for Cosmetify

The research analysed the latest set of Strictly celebrities and dancers based on their Instagram follower counts, the number of articles written about them in the past year, and how many times they are Googled each month.

Last year’s winner Oti Mabuse landed in the number one spot, which is not surprising considering she won last year’s show, partnered with comedian Bill Bailey. Mabuse is the most Googled Strictly member – her name is searched an average of 81,000 times per month. She is the third most talked about, with 448 mentions in articles written within the past year. In addition to her 588,142 Instagram followers – the fifth most – she tops the list.

In second place is Tom Fletcher who has amassed a huge fan base due to his role as the lead singer and rhythm guitarist for the band McFly. With two million Instagram followers – the most on the list – and a 55,000 Google searches of his name each month, it is clear the internet is invested in his journey on Strictly.

Coming in third is another Strictly pro, Janette Manrara, who has the second highest number of searches (73,000). She has been part of the show since 2013 and has since been able to grow her Instagram following to 441,751.

In fourth place is Giovanni Pernice, who has been part of the Strictly professionals team since 2015. He has reached the Grand Final of the competition three times and has proven to be a hit online with 476,128 followers on Instagram and a monthly search volume of 42,000.

In fifth place is Anton Du Beke who has been part of Strictly Come Dancing since the very first series. He is the fourth most searched and most talked about participant with 55,000 monthly searches and 433 mentions in articles from the past year. 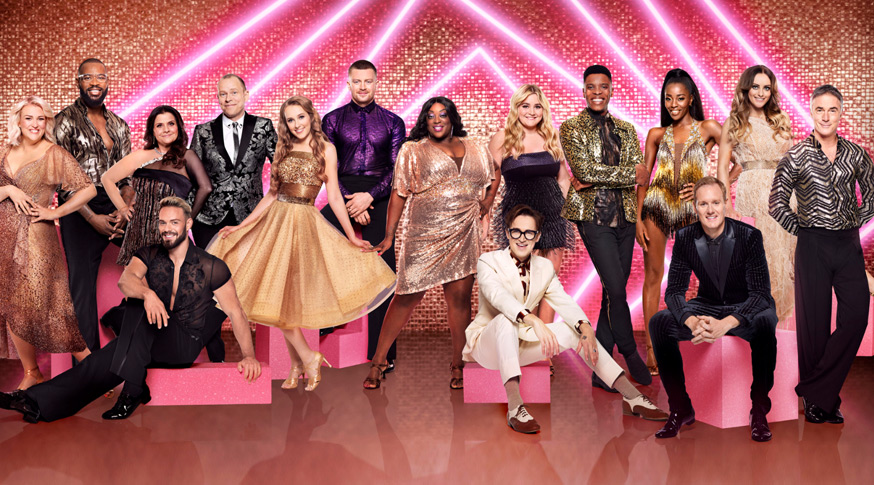 BBC regular, Breakfast Host Dan Walker comes in sixth. He is the most talked about member of the cast with 780 article mentions, and he has 205,607 Instagram followers.

One of the newer members of the pro team, 2017 starter Dianne Buswell ranks seventh. She boasts the third highest Instagram following of the 2021 cast with 842,715 followers. After partnering with Youtuber Joe Sugg in 2018 and forming a relationship offscreen she has continued to grow her online following by regularly updating her fans on her Youtube channel and Instagram.

Olympic swimmer Adam Peaty takes eighth place. He is the second most talked about celebrity with 608 article mentions in the past year. He also has more than half a million followers on Instagram.

In ninth place is Strictly professional Gorka Marquez. His large Instagram following (652,706) has surely helped him secure a top ten ranking, and proves he has a lot of invested fans eager to see how he fares in this year’s competition.

Finally in tenth place is Karen Hauer who is the longest serving female Strictly professional dancer. She has a respectable 270,485 followers on Instagram and an average monthly search volume of 36,000.

Surprisingly, celebrities such as Chef and Influencer Tilly Ramsay did not make the top ten, despite having the second highest Instagram follower count with 936,000 followers. The question is, will their online presence and popularity have an impact on the participants’ Strictly journey, and their chance of taking home the glitterball trophy?

The research was commissioned by www.cosmetify.com, Strictly Come Dancing continues this weekend on BBC One.