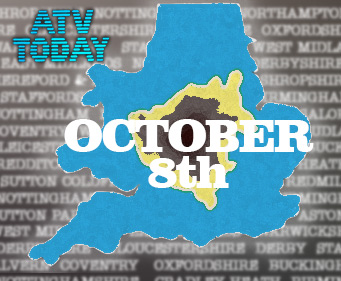 Back to 1965 and ATV Midland News reports on the grand opening of the Post Office Tower (now the BT Tower) in London, with a link up to the West Midlands.

The communications tower is located in Fitzrovia, London, owned and is owned by the BT Group, which evolved out of the original Post Office communications when the telephone industry was privatised. It has been previously known as the GPO Tower, the Post Office Tower, and the British Telecom Tower. The main structure is 177 metres (581 ft) high, with a further section of aerial rigging bringing the total height to 189 metres (620 ft). Its Post Office code was YTOW.

It was designed by Eric Bedford Chief Architect, G R Yeats, senior architect in charge with S G Silhan overseeing the project as senior engineer with Kenneth Holloway on site for the Post Office as their engineer.

The tower was made Grade II listed in 2003. The listing notes the building as a ‘Sleek reinforced concrete cylinder’ and clad in glass and metal frames around the exterior. It is a notable landmark on the London skyline. was built as a centre of national and international telephone communication by ultra-high frequency (UHF) microwave transmission. The site was chosen at the rear of the Museum Telephone Exchange because this exchange was already the focal point of the telecommunications system and the vision cables network for London.

Upon completion in 1964, it overtook the Millbank Tower to become the tallest building in both London and the United Kingdom, titles that it held until 1980, when it, in turn, was overtaken by the NatWest Tower.