The latest from the BBC Medical sagas…

It’s a double bill of drama tonight in Casualty with two episodes back-to-back.

In the first outing Sol, Stevie and Ethan head out to save a man injured by a racist police officer, however, Stevie is more interested in finding some incriminating facts on Ethan to get some revenge on him for her sister’s condition. Jacob throws himself back into his work, but his friends are concerned that he is in denial about what has happened to him. Paul returns to the hospital, with plans to make amends with Robyn.

In the second offering it’s more of the ‘environmentally friendly preaching,’ the soaps have shoe-horned into scenes this past week as Dylan sets about implementing new environmental initiatives.

Elsewhere Ethan leaves Stevie tampin’, fumin’ ragin’ when he makes a confession. Dylan has to intervene to prevent her anger from getting in the way of assisting sisters trapped together in barbed wire. Rash provides medical treatment to some gang members at his flat, only to see them turn up at the ED the next day.

This week in Leatherbridge the video of Daniel confronting fly-tipper Jase has gone viral and impressed his daughter Izzie. Elsewhere, Rob listens to Karen’s scepticism about Valerie’s intention to marry herself as a sologamist before going off to see his therapist Charita. On the way, some boys invite him to kick a football about, putting him in a cheerful mood that is spoiled by Charita’s questions about his marriage.

As the week goes on Bear has let himself in to Makeda’s house and is worried to not hear any response to his calls. Finding her unconscious, he calls an ambulance for her to go to St Phil’s. The first person he tells about Makeda’s state is Sid, who interrupts small talk at the Mill to rush off to St Phil’s, leaving his patient visits to be postponed. Consultant Christine Deng cannot yet tell Bear what is wrong with Makeda, which frustrates him and feeds his suspicion that he caused her collapse.

At the Mill, Al annoys Valerie by sticking a photo of Daniel as World Warrior over his staff one on the wall, which she worries is insensitive to what Bear is going through. Al and Valerie’s debate about how appropriate Al’s practical joke is at this time continues until Bear himself walks into work and makes light of the picture of Daniel. Al has more luck with persuading an initially reluctant Luca to come to the pub to meet Keith and help him come out of his shell. Keith is worried that Al is trying to set him up with Luca.

Also this week Karen responds passionately to Rob’s suggestion that they separate as a couple, but Rob won’t take it back and can only say that he feels lost and Jimmi has a bad time on Thursday.

This week in the wards of Hoby City burdened by devastating news, Amelia has to be strong for her husband as Eli is bringing his A-game to surgery on a young patient. Eli promises “no one dies today” – but will he regret his vow?

Ollie is shocked to see a blast from his shady past on AAU. Will intimate revelations recast our understanding of this once dashing doctor as a Mr Hyde? Jeong feels like he’s treading water while the lives of his friends rush on. Despite his becoming an F2 doctor, no one seems interested in celebrating. Is this lonely medic falling through the cracks? 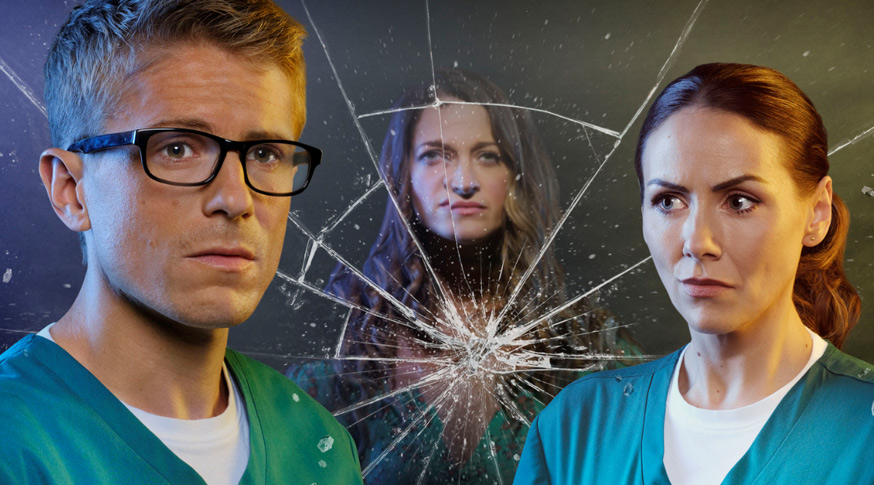 Landscape Artist of the Year heads to Compton Verney