“In October 1960, I made my television debut as an announcer for ABC TV at the Didsbury studios in Manchester.  In those days there were only two TV channels – BBC and ITV.  ABC, the weekend contractor in the North and Midlands, had a blockbuster schedule and people went to work on Monday mornings talking about the programmes they had all seen the night before, something that couldn`t happen today – truly a golden era of television” – David Hamilton

Networkonair, available from July 29th in the UK and Ireland, enables viewers to rent specially curated ‘Nights In’ and collected series from ABC Television, which broadcast in the Midlands and Northern England between 1956 and 1968. Many of these programmes have not been seen since their original broadcast. Content has been newly remastered from the surviving original film material.

These Nights In will be made available alongside accompanying series to launch the service. Titles include Dial 999, Big Night Out, Armchair Theatre and The Bruce Forsyth Show. On top of this, various special documentaries can be found including one on Michael Caine available exclusively via a Night In.

“Having spent the best part of 25 years liberating huge swathes of British television and film from the archives and building a sizeable catalogue of things you thought you’d never see again, we’re really proud to present something new and different for our first foray into video-on-demand.” – Tim Beddows, Managing Director of Network Distributing Ltd 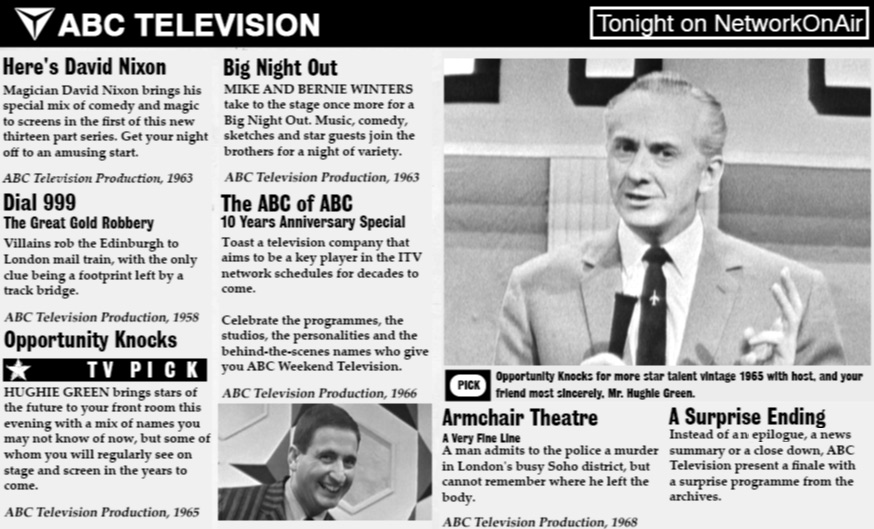 The First Night In, titled ‘Welcome once again to Manchester’.

The highlight of this new service is Network’s Nights In programming – hours of curated content starting at £3.99. These are entire evenings of television from the 1950s and 60s and remastered in the best possible quality. Platform viewers will enjoy a truly vintage and nostalgic viewing experience, it is time travel TV!

Nights In experiences, which includes 4-6hrs of programming presented as an evening of television, with continuity links and commercials, are priced at £3.99 for the first three, with future Nights In at £4.99. People can also rent handpicked collections of episodes from their favourite series for £6.99 per series, giving upwards of 9 hours of golden TV nostalgia.

On top of this, users will have 28 days to watch the content from purchase. The content itself is available for a limited time only on the platform. Since 1997, the Network imprint has been instrumental in releasing vintage television, originally on VHS tapes, then on DVD, and more recently on Blu-ray and digital formats. Now the company is launching its very own streaming service, with new ways to experience classics from the archives of British television.

“On this occasion we’ve foraged the ABC Television library, a company once at the heart of British broadcasting in the 50s and 60s. We’ve had a huge amount of fun building a schedule of some amazing programmes, most of which haven’t been seen since they were originally shown and working with David Hamilton, who has been just perfect for this project. Merging these old programmes with new technology is going to be an exhilarating televisual journey and one we’re looking forward to immensely”,  – Tim Beddows, Managing Director of Network Distributing Ltd