‘EastEnders star Michelle Collins to plant mum’s ashes with tree gifted to her by co-star Adam Woodyatt’ noted the Metro paper this week. Actress Michelle, who has played theatre and television drama, will be best-loved for her roles in Corrie and ‘Enders.

However, it’s real-life events that have seen her in the press. “When my mum died three months ago I got lots of beautiful flowers, but I also got this plant from a friend of mine, Adam Woodyatt,” the paper noted she said on a video on Instagram, adding, “It says: “Special Mum”. These beautiful pink roses.” Michelle went on to note she’ll be mixing in some of her mothers ashes when she plants the thoughtful gift in her garden.

Actor Danny Miller has hit out at this year’s Love Island contestant in an explosive Twitter rant, Leeds Live reported. The Emmerdale regular who plays Arron in the ITV saga produced in Leeds told social media followers that ITV2’s Love Island contestants were the “biggest bunch of bellends” in the now-deleted social media post which appeared to mock Faye Winter’s “shade of lipsticks.”

“We live in a world where our younger generation are pushed to ‘find love’ in a villa with the biggest bunch of bellends you’d ever meet in your life. Aged 24 and ‘found love’ on a TV show with a girl who has 72 different shades of lipstick colours that make you want to give up.”

Well done Danny, for saying how you feel. 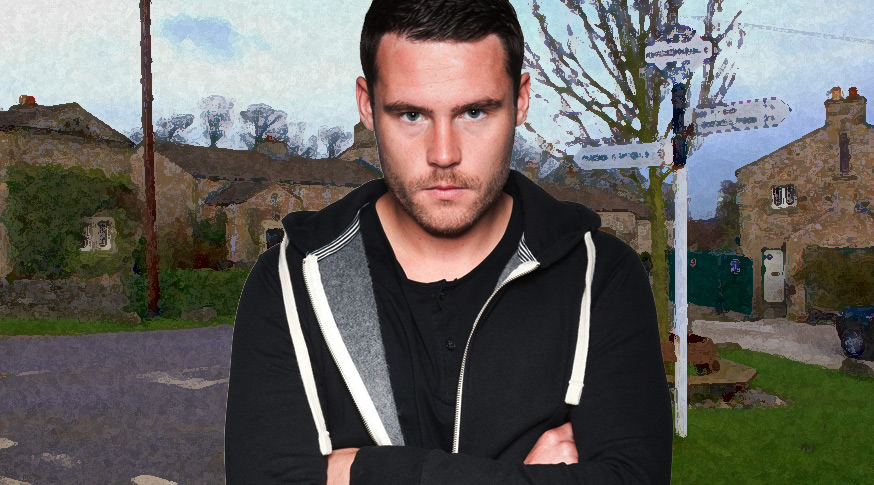 Anti-vax protesters decided to ‘storm the BBC’ only they weren’t. They were storming Television Centre, which hasn’t been the HQ for nearly a decade. They would have had more luck surely going to the current BBC HQ Broadcasting House and flashed their tits through the window of The One Show.

Anyway, this mad rush of protesters who were campaigning against vaccine passports and jabs for children, with not very up-to-date TV knowledge, caused ITV Daytime who use the TV Centre facilities, to have a panic, leading to according to Entertainment Daily! (who also called it BBC TV Centre which it no longer is) Ruth Langsford hiding in what sounds like a mop cupboard. The telly face, her hubby Eammon, and This Morning’s guests, along with Loose Women, were ‘trapped inside’.

Sticking with This Morning and Eamonn Holmes has caused yet another outrage. The Mirror report ‘Holmes has apologised to Dr Zoe Williams for making comments about her hair on This Morning. The veteran TV host caused outrage when he compared the physician to an alpaca, sparking accusations of racism.’

Taking to social media the former UTV news host said, “Hey everyone out there. if my attempt at being humorous with my friend @DrZoeWilliams was misjudged I am mortified and humbly apologise to anyone who was offended,”

Remember you can only take the piss out of someone’s hair, even in a fun way, if they’re white. But only if they’re white and not likely to have a ‘mental breakdown’ because of it. This is not 1976 – thank God.

Children’s has-been Timmy Mallett and his trusty mallett are back with a bang – rating a range of retro ice lollies for Iceland. Last spotted by myself standing on a platform at Preston train station seemingly seeking attention, dressed in his 80’s kitch outfit, no one bothered to take much notice. But Iceland has been dazzled by the man who entertained a few 100 kids who could be bothered to get up very early and watch TV-am in the 80s.

The man with many zany antics, has been appointed the supermarket’s ‘Chief Ice Lolly Tester’. Sadly his partner ‘Magic’ the Cockatoo, is long dead. A bit like Mallett’s mainstream TV career since 1992. Anyway once famous for whacking children playfully over the head with his giant foam mallett, Mallett now licks lollies and awards marks of ‘squillions’.

Mallett, who presented Wide Awake Club and Wacaday in the ’80s, returns to ‘Timmy Towers’ in video clips sporting his trademark vibrant glasses and outfits.

“Barratt have teamed up with Iceland to create the ultimate ice lolly – sweet shop favourites. Ooh yummy! And I am chief ice lolly tester.”

Give me a bloody Anadin and that’s just from the description without even watching a video. To be fair, its just a bit of summer fun for 2021 and we can all do with a bit of fun, even if it is Timmy ‘this is my entire career’ Mallett.

Sampling a stripy blackjack lolly, he says: “I used to love Blackjacks. The aniseed has a certain zing to it. I wonder if these turn your tongue black?” After a taste, he concludes: “That is a flavour that makes me want to go ‘bleugh!’ As well as all his most famous catchphrases, viewers are treated to the children’s TV icon’s hammers ‘Mallett’s Mallet’ and ‘Pinky Punky’.

He advises hot and bothered Brits, who have been sweltering in summer heatwaves: “If you want something utterly brilliant, get yourself an ice lolly.” Timmy Mallett said: “I’m so utterly excited to be Iceland’s chief ice lolly tester! Who would have thought that trying lollies would be so much fun? 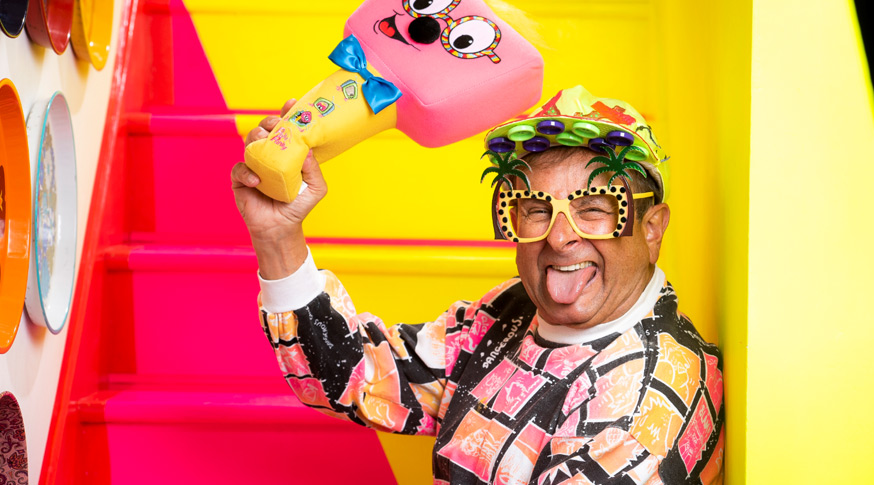 Why anyone gives her the time of day is a mystery to me but apparently, Gemma Collins is raking in a fortune from her personal appearances and is allegedly charging thousands for doing an hour’s work The Mirror reported.

The paper noted that ‘The GC’, with it being reported that her rate is £15,000 for an hour. You’d think being told there was a free buffet would have been enough to lure her out. I’m so glad I’ve worked through the years of real showbiz stars, real divas and real talented personalities, who rarely charged for their time who went out of their way to be charming and welcoming. Sadly I guess this age of the internet and fickle fame has made ‘stars’ of out people with little worth. She is, The Sun say, charging £250 for fan selfies. Christ sake, just shove a blonde wig on Mr Blobby and he’ll stand and pose for free!

A This Is Your Life, wiped in the 1970s by Thames Television, has been seen for the first time in 48 years. Left sitting in Crossroads Fan Club vaults for decades the footage has been unearthed and shared at the Missing Believed Wiped event this weekend in Birmingham. The edition in question features ATV legend Noele Gordon who is surprised by Eammon Andrews on the set of Crossroads, before having her life story told at the Thames studios in Euston, London.

The event, organised by archive experts Kaleidoscope, also featured a recently recovered 1981 episode of Crossroads that had been recorded by founding member of the Crossroads Fan Club, Simon Cole. The episode in question, 3534, is the edition screened directly after the episode featuring Meg Mortimer (Noele Gordon) leaving on the QE2. It reveals Meg left all her shares in the motel to daughter Jill (Jane Rossington) much to the charing of co-director of the motel David Hunter (Ronald Allen). 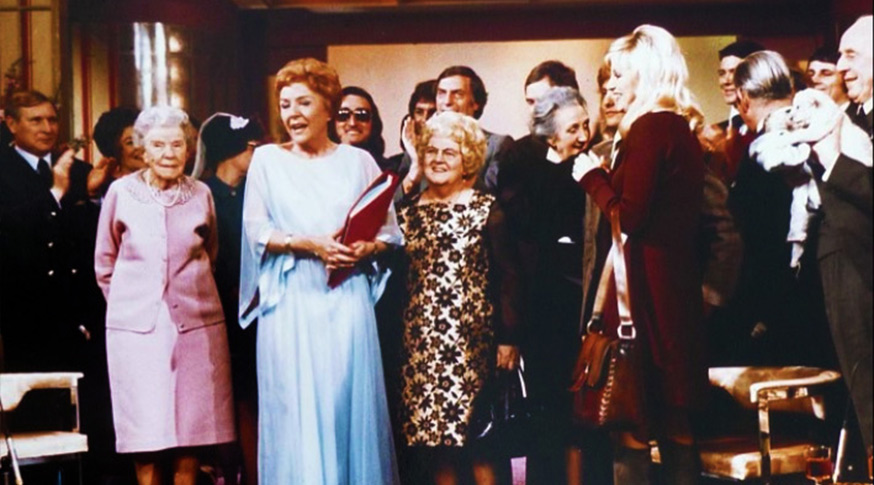 Katie Price, a regular of our Showbiz 10 has had images of her gory surgery blocked by Instagram for being “too graphic and violent”. The mother, model and television regular recently travelled to Turkey to get full-body liposuction treatment and eye lift surgery. The Sun report in one of the snaps Katie’s can be seen looking in pain as her face and head were wrapped in bandages as she recovered in hospital.

In the past 12 months alone Katie has faced painful months, in June her legs swelled up following full body liposuction, which resulted in her having to lay on her back with her legs in the air. As many noted a position that she wasn’t immune to staying in for long spells. Then there was her balding head, falling out teeth, a farty arse and broken ankles.

On World Lion Day 2021, Tusk has proudly announced the launch of the Tusk Lion Trail, a global art installation in support of African conservation.

Contributors Rolling Stones guitarist Ronnie Wood and his wife Sally Wood were pictured with their twin daughters Alice and Gracie in Piccadilly Circus alongside renowned artists Gavin Turk, David Mach and Hannah Shergold to launch their decorated lion sculptures. The Tusk Lion Trail is part of Art of London’s Summer Season of public art & Westminster City Council’s Inside Out festival.

“As one of Tusk’s longest standing supporters I couldn’t be more humbled and excited to be part of the Tusk Lion Trail 2021. Raising awareness and educating people about the impact of humans on our beautiful natural world and more specifically about threats posed to Africa’s endangered lion population is very close to my heart. Channeling creativity via art is a big part of my life and painting two lion sculptures for the Tusk Lion Trail is something I have very much enjoyed doing over the last couple of months. I am very much looking forward to seeing the pride on the streets across the world in August.” – Rolling Stones guitarist and Tusk Ambassador, Ronnie Wood

As well as Wood others supporting the cause include wildlife photographer, David Yarrow, artists Ian Davenport, Gavin Turk and David Mach, rugby star Richie McCaw, American fashion designer Donna Karan, and actors Deborra-Lee Furness and Noel Fielding have all collaborated to craft their own unique pieces of art. Each lion sculpture has been generously supported by a Tusk partner or supporter.

The lion sculptures will be displayed to the general public at a selection of iconic sites around the world including a number of UK cities (London, Edinburgh and Bristol), The Hamptons – New York, Sydney, Wellington and Nairobi, from 10th August until the end of September 2021.

Farewell, a Una Stubbs, the talented star of stage, TV and screen since the 1960s.

The dancer, presenter and actress passed away on August 12th aged 84.

She made her TV acting debut in the Rediffusion series Rush Hour in 1958 and in 1960 she appeared in ATV’s surreal comedy The Strange World of Gurney Slade. Continuing with small parts at ITV she appeared as a supporting dancer of Cliff Richard’s ATV television series, before being cast in his 1963 movie Summer Holiday that made her an ‘in demand name’ leading to a long-running role in BBC One sitcom Till Death Us Do Part. She also became loved by children in Southern Television’s Worzel Gummidge where she starred as Aunt Sally opposite Jon Pertwee as Worzel in the late 1970s.

Also in the 70s and 80s, she was the female team captain on Thames Television game show Give Us A Clue, the charades game gave Una a chance often to show off her graceful dance skills. She also starred in ATV drama Shirley’s World, made guest appearances on variety shows such as The Des O’Connor Show (ATV, 1966) and I’m Bob, He’s Dickie (ATV, 1977) alongside Bob Monkhouse and Dickie Henderson. She also joined Warren Mitchell when Till Death Us Do Part was revived by ATV in 1980. Retitled ‘Till Death…’ The pair reprised their roles as Alf Garnett with Una as his forthright daughter Rita along with another original performer from the Beeb series Dandy Nichols as Garnett’s put-upon wife Elsie.

Other acting appearances included in BBC One’s EastEnders, Yorkshire Television’s Heartbeat and BBC One drama Sherlock. As a presenter, she co-hosted The Big Painting Challenge in 2015.

In a statement, Stubbs’ sons Joe and Christian Henson and Jason Gilmore said: “Mum passed away quietly today with her family around her, in Edinburgh. We ask for privacy and understanding at this most difficult and sad of times.”

ITV look into the lives of the Kray twins