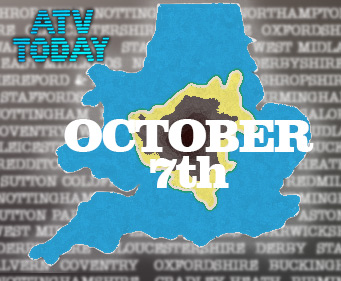 Back to 1971 and ATV Today’s Lionel Hampden was out and about in the Midlands asking people if they would recognise a thief if one passed them by?

The item followed a report, on the same day, in The Birmingham Post that criminals had ‘the wrong image’ in the eyes of potential victims.  The article noted that ‘people must get rid of the idea that a thief is a shifty looking invidiual’.

John McKay, the Chief Inspector of Constabulary for England and Wales noted in a speech on October 6th that people needed to be aware that criminals do not have ‘a discontented scowl, a striped vest and a bag marked swag’.

McKay made the comments at the launch of a £188,000 crime prevention campaign at the Home Office which he went on to note that an indictable crime occurred every 20 seconds during 1970. There were 1,555,995 of these incidents across the year.

Stats released also showed there were 914,723 thefts and unauthorised takings across the previous year, including from vehicles and the theift of bikes and vehicles.

There was a burglary or robbery from a house that equated to one every three minutes for 1970.

The ATV Today Vox pops asking people if they would recognise a thief by looking at them, gained mixed response although the majority clearly note that criminals don’t wear ‘special crime clothes’ like in the cartoons however they could be cunning and rather than a ‘swag bag’ carry a briefcase to make them appear ‘someone important’, and most would just be ‘normal looking’ however there is a suggestion one could be wary if the person is ‘shifty looking’.