Last night’s episode of Emmerdale saw the collapse of a perilous rope bridge that was suspended over a canyon – sending Manpreet Saharma (Rebecca Sarker) and Charles Anderson (Kevin Mathurin) into the menacing waters below.

Tonight’s (19th October) episode of the soap picks up with David (Matthew Wolfenden) and Victoria (Isobel Hodgins) clinging on to the broken bridge for dear life.

They will soon join Manpreet and Charles as they fight for their lives in the water below. Will they survive? David’s odds may not be as grim as Victoria’s as show bosses have teased that this is not the only ‘terrifying plunge’ that she will be making in tonight’s episode.

““I’m at ease with heights so I don’t understand how if you know you’re clipped on to a harness you can be scared of falling. Victoria was obviously supposed to be the scared one and David was supposed to be the confident one. That wasn’t the case in real life.” – Isobel Hodgins

Matthew Wolfenden described the scenes he filmed at height as being “absolutely terrifying”, however he noted that he was more comfortable filming the water-based scenes than co-star Isobel was.

“It all flipped with the water stuff as Izzy wasn’t too confident in the water and I love being in the water. It’s funny because our characters were so opposite to us. Victoria was supposed to be scared of heights and David is trying to help her but in reality, it was the other way round.” – Matthew Wolfenden 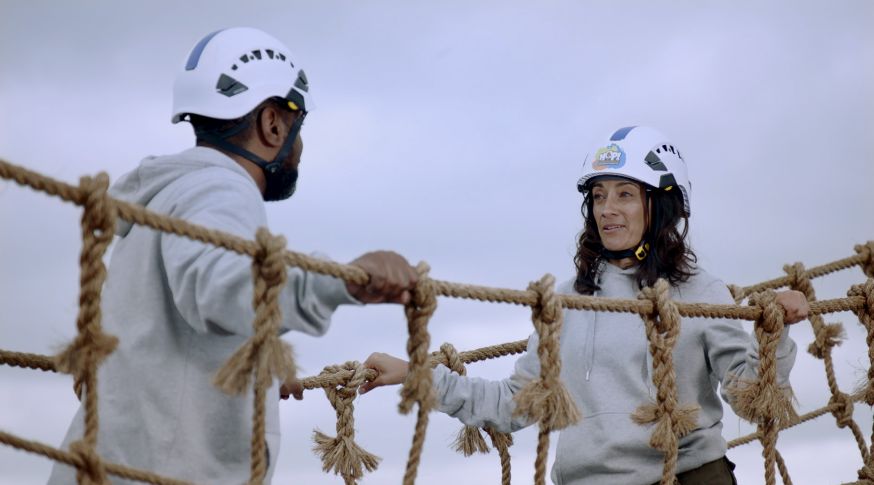 Speaking of the bridge stunt, Kevin Mathurin aka Charles revealed that the cast were “about 60ft above the water” and that VFX will make it look as though the rope bridge is “suspended between two cliffs” rather than clipped to a crane as it was in reality.

“It didn’t look inviting but the way they constructed and designed it, it was fantastic. I looked at it and thought, this is my job, amazing! Rebecca was so comfortable walking across the bridge and I was holding on for dear life like a mug.” – Kevin Mathurin

Sarker added that the stunt was not only “a feat of imaginative prowess” but also of “technical excellence.”

“We had a wonderful stunt team managing any concerns so felt totally safe and secure. [Although] your heart can’t fail to miss a beat or two when you’re on a Tarzan-like rope bridge with a 60ft drop below into a water-filled quarry.” – Rebecca Sarker

A dramatic week of Emmerdale continues tonight at 7pm on ITV