The final week in Erinsbrough…

Since its first airing on BBC One in 1986, Neighbours has been a staple of British daytime television for decades. Now, the beloved soap opera created by Reg Watson (Crossroads, Sons & Daughters, Prisoner: Cell Block H) comes to an emotional conclusion in two back-to-back primetime double episodes.

This week sees some returning faces and also some fabulous flashbacks including scenes with a young Paul Robinson, Helen Daniels, Nell Mangle and Madge Bishop.

Monday: Refusing to be pushed around by Izzy, Susan’s put her own plan in motion. Meanwhile, Izzy has a run-in with another former Ramsay Street resident. She soon gets wind of Susan’s plan, and refuses to take it lying down.

Chloe’s reeling from her surprise visitor, unsure if it’s too good to be true. Already juggling several major life decisions, she decides to take some time to be sure she makes the right choice.

When Jane finds Byron giving Clive the watch he left at Danielle’s place, she berates them both. Byron sets her straight, and encourages her to work things out with Clive, before dropping another bombshell on his mum…

Tuesday: Jane’s disapproval of Byron stirs up old resentments for Nicolette, and mother and daughter soon find themselves back at odds. With all the change occurring around her, Nicolette is left to wonder where her own future lies…

Susan insists Malcolm makes a choice, but to her dismay, he chooses Izzy. Has Susan made a terrible error in judgement?

As wedding plans continue apace, Melanie and Toadie are excited for their upcoming nuptials… But it brings to the forefront moments of their past they both struggle to reconcile. Toadie realises he needs to make a bold gesture for both to look forward to the future… 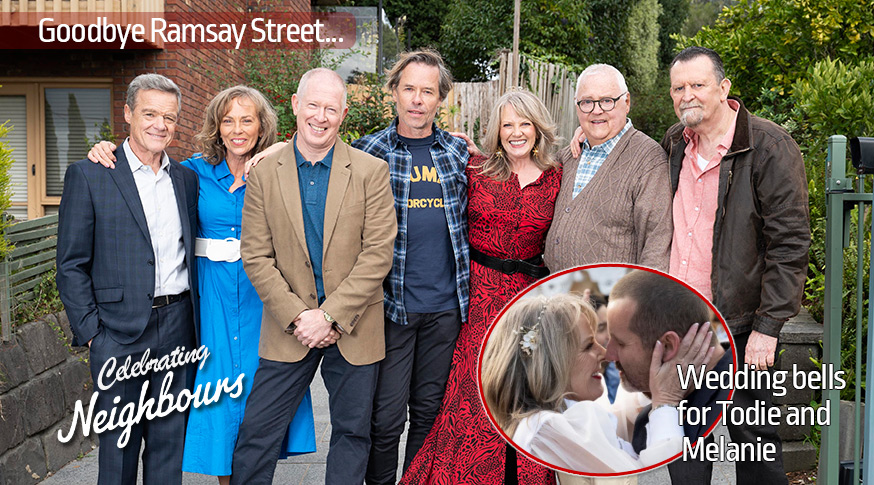 Wednesday: Both packing up to move, Terese and Paul, are once again thrown into each other’s orbits. A surprise discovery leaves her emotionally overwhelmed and primed to blow up at Glen.

Toadie is visited by an old friend who wants to wish him luck for the wedding, and who learns about the estrangement with Amy…

Jane is upset to discover Nicolette’s plans to move to New York and fears she has driven her daughter away by acting like Mrs Mangel.

Thursday: Glen continues to struggle with Terese’s allegiance to Paul.  Despite her attempts to reassure him, he comes to a painful realisation. Lucy is thrilled when Chris and Annie arrive from New York.  Warmed by the Robinson family reunion, Leo joins David and Paul in deciding to move to the US.

Izzy has another chance encounter with Shane Ramsay.  Dazzled by his wealth, Izzy soon crosses a line.

As friends and family gather for Toadie and Melanie’s wedding, Ramsay Street has some magic in store for everyone.

Friday: Primetime Special: Karl and Susan learn that Izzy has been up to no good behind Mal’s back. They prime themselves for a confrontation, however Izzy’s next move surprises everyone.

Toadie and Melanie are thrilled when Callum arrives for the wedding. The only thing missing is Amy – will her return lead to closure or chaos? Clive makes a grand gesture to try and win Jane back.  But in an unexpected twist, his efforts are thwarted by the return of Mike Young.

Jane gives Mike a tour of all the Ramsay Street houses before they go under the hammer.  As old feelings stir, Clive’s jealousy leads to a shocking confrontation.

Harold asks Karl and Susan to be the custodians of the history book.  Faced with her beloved friends and neighbours leaving, Susan struggles with her feelings. As Toadie and Melanie’s wedding gets underway, Terese and Paul confront their unresolved feelings.

And especially for you, Scott and Charlene make a nostalgic return to the street at the invitation of Shane Ramsay. Susan looks around as the wedding party on the street is in full swing and ponders just what has made Ramsay Street the perfect blend… 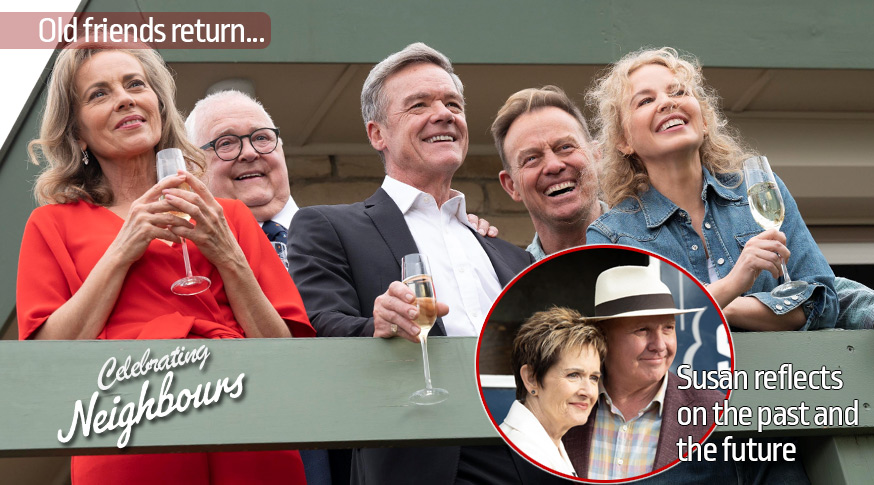