This debilitating condition is nothing new and back in 1990, Film Australia produced a very effective educational programme called I’m Still Here – Caring for People with Dementia which is now available on DVD from the National Film & Sound Archive of Australia (NFSA).

The programme has more relevance now than when it was first produced given the proliferation in the number of people being struck down by dementia. I’m Still Here skilfully covers every aspect of the disease through dramatised segments performed by actors, and through interviews with nursing staff, academics, patients and relations of those who have fallen foul of this horrific condition.

After a general introduction to dementia we learn of the ways the brain changes, how a patient’s communication is effected and learn of the associated problems of wandering off, agitation, aggression and what is required for total nursing care. The aim of the project was to assist nursing and personal care staff in understanding and handling their patients; it certainly succeeded in that aim and is equally useful viewing for the rest of us. 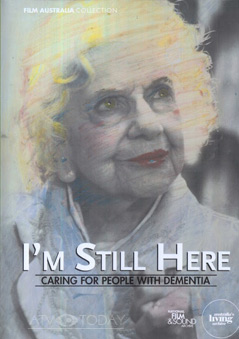 I’m Still Here is presented by Georgie Parker who played Sister Lucy Gardiner in A Country Practice and who now stars as Roo Stewart in Home & Away. My late friend Colleen Clifford gives a moving performance as dementia patient Mrs Oakes who finds herself at Kambah Nursing Home and who is trying to come to terms with her situation.

Colleen enjoyed a remarkable career and unlike poor Mrs Oakes was as sharp as a tack right up until the very end, in fact she was the oldest working actress in Australia when she died aged 97. She never thought of herself as old and neither did those of us around her, the key to her longevity appears to have been continuing to do what she loved and that was working as an actress, director and teacher of young performers.

Colleen was a Royal Command Performer, beginning her career here in the UK where she graced the West End stage in hits such as Guys and Dolls, and where she was one of the stars of the very first Logie Baird Television Service. She was a regular on BBC Radio appearing in everything from comedy to musical comedy, vaudeville, and classic productions such as the 1927 adaptation of Henry the Fifth in which she played Katherine opposite Harcourt Williams as Henry.

After moving to Australia she never looked back and became the Grande Dame of Australian Theatre. She starred in countless stage productions, movies such as Careful He Might Hear You, and went down in folklore for her legendary one woman show which was always guaranteed a full house. Thanks to television she found a whole new fan base back in England through her appearances in programmes such as The Young Doctors, Case for the Defence, Prisoner: Cell Block H, Cop Shop and A Country Practice.

I have seen so many friends and colleagues struck down by dementia, it’s a ghastly plague on the modern world, and would highly recommend I’m Still Here – Caring for People with Dementia which can the ordered exclusively from the NFSA website along with a host of other classic Australian productions.