The actor and comedian stationed himself outside the Houses of Parliament with supersized versions of pharmaceutical paraphernalia (giant prescription, pill bottle and neon pills) as he urges Prime Minister Boris Johnson to ‘cure the social care system’.

He was joined by people affected by dementia and Alzheimer’s Society CEO Kate Lee.

On the same day that Alzheimer’s Society releases new data that shows emergency admissions from dementia care failures are soaring and set to intensify, the charity also releases a hard-hitting campaign film that highlights the stark reality facing carers across the UK.

In 2019, Boris Johnson promised to fix the social care system. Two years on and we are still yet to see this materialise. Until things change, a dementia diagnosis will continue to claim more than one life, as the families facing dementia feel its destructive effects.

Giant pills involved in the stunt read cures for the care system as asked for by people affected by dementia – including ‘Carer Support’, ‘Access’, ‘Funding’, ‘Parity with NHS’ and ‘Quality’.

Sir Tony Robinson, whose parents were affected by dementia, said: “I urge everyone in the UK to sign the Dementia Action Week petition. It is vital that the social care system is one that we can be proud of. For too long, families have felt forgotten by a system that is unfair, difficult to access and inconsistent, not giving people with dementia the care they so desperately need.”

While dementia cannot be cured at the present time, something can be done about the flaws in the social care system, which would help to prevent further heartbreak and distress for thousands of families across the UK.

Elisabeth (76), from London, who has dementia who was present at Westminster said: “Like many others, my experience of dementia is a personal one, and we need a system that reflects this. When I was first diagnosed, it was so alarming and difficult to know where to turn. I urge everyone to sign the petition to make a real difference to people like me across the UK. It is so important for me to see change, and to raise awareness of the situation facing thousands of people in the UK so the Government doesn’t abandon us.”

Alzheimer’s Society supporter Trevor (68), whose wife Yvonne (65) has dementia and was present at Westminster said: “For too long now, people affected by dementia and their families have felt abandoned by the social care system. When my wife was diagnosed, it was just so difficult to navigate the system to understand both the care support and benefits to which she was entitled; good care can make all the difference to the whole family. I hope that everyone will sign the petition so that the Government can do the right thing and make the system work for the thousands of people who will be affected by this for generations to come.” 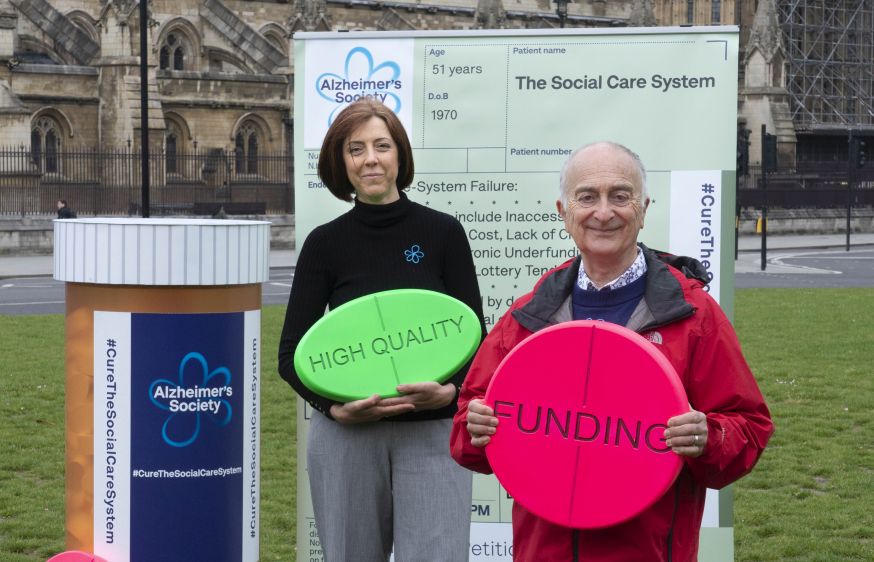 Kate Lee, Alzheimer’s Society CEO said: “Coronavirus has laid bare the cracks in our broken social care system; not only have people with dementia been hit hardest by the pandemic, but on top of that they are facing a care system that is inaccessible, costly and inconsistent.

“We want people affected by dementia to know they aren’t alone. This Dementia Action Week we need the Government to step up to the plate and cure our social care system to provide good quality, accessible and personalised care for everyone with dementia and their families Transforming dementia care must be the legacy of the pandemic.”

One in three born in the UK today will develop dementia at some point in their lives and it’s estimated that there will be one million people living with it by 2025, making dementia care the greatest healthcare challenge facing our society.

Unlike any other health condition, it’s social care not the NHS, that people with dementia rely on every day, getting a raw deal just because they developed dementia. They are by far the majority of social care users.

The coronavirus pandemic has, Alzheimer’s Society note, brutally exposed how the social care system fails people with dementia, showing how deeply unfair, difficult to access, totally inadequate and expensive it is.

This Dementia Action Week (17-23 May), Alzheimer’s Society is urging Governments to honour their promise to rebuild the broken social care system.

Visit alzheimers.org.uk/DAW to sign the petition. The campaign video can be viewed below:

Tighty Whities still prove to be popular undies for the fellas